AlunaGeorge on Their Sophomore Album, Festival Style and Glitter

AlunaGeorge talk their new album, due out this fall, as well as style and beauty, ahead of playing the Emporio Armani party in Madrid. 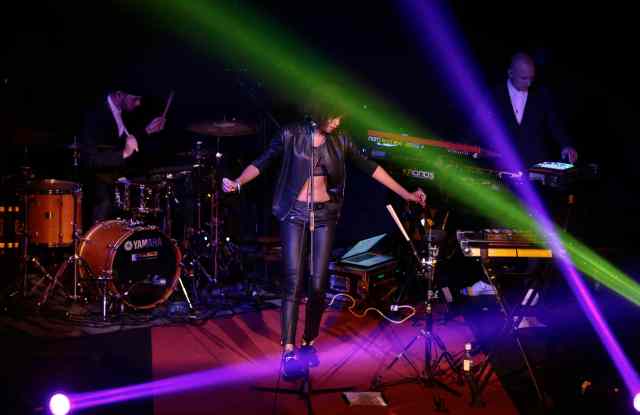 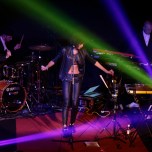 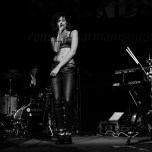 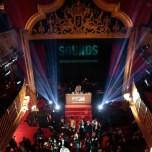 AlunaGeorge, a synthpop Brit duo comprised of Aluna Francis and George Reid, broke into the spotlight with the feature on Disclosure’s track “White Noise” in 2013. The duo released their debut album, “Body Music,” in 2013; their secondary effort has no scheduled release date, though Francis notes it is expected in the fall. Until then, fans have a few things to tide them over; on Wednesday, the band released their latest single, “My Blood,” on the heels of the early April release of “I Remember.”

Francis and Reid flew straight from playing Coachella to Madrid, where they performed at the latest edition of the “Emporio Armani Sounds” parties, held Thursday night. WWD spoke to Francis shortly after she’d touched down in Madrid.

WWD: You just arrived in Madrid from Coachella — any culture shock?

Aluna Francis: Yeah, I mean, I’m used to it. I’m always moving from one city to another that is completely different from the last.

WWD: How do you approach the much-discussed festival style?

A.F.: Coachella is all about being hotter than you want to be and trying to stay cool. You need to make sure that everything you need to pack is going to make you feel free and fun. Because clothes really put you in a set mood, and the kind of mood you need to be in at a festival is in your comfort zone but kind of open to experimentation and feeling kind of crazy. You don’t want to stay your everyday self, because that’s boring. So it’s an opportunity, sort of.

WWD: What is your day-to-day style like, when not performing?

A.F.: I don’t know, I guess sports-chic? I keep using this word ‘ra-chay’ that I came up with, which is basically just ‘ratchet.’ But we don’t talk about that [laughs]. I find it quite hard to talk about my style. I’m definitely a pants-wearer usually. I mean, trousers, I’m English, I’m being English now! But in L.A., or somewhere hot, then it’s like a one-stop outfit, like a T-shirt dress. I like it to just be one thing, and then a jacket over top.

WWD: What are some essentials you always take on the road?

A.F.: I usually make sure I have my emergency makeup, which is the type of lipstick you can wear everywhere, so a brown lipstick and a red lipstick. And then a liner, which I’ll usually use for eyebrows and eyes and lining my lips. One of my new things is for festivals is glitter. Just make sure you have almost five different types of glitter. It’s really good for making sure that when you’re under those lights that we can really get a vibe across, without wearing a lot of makeup on stage, because it melts off.

WWD: Tell me a bit about the video for “I Remember,” which you released last week.

A.F.: We wanted a really simple idea. We weren’t planning on having a music video, so we wanted almost like a moving image. So the concept was really simple, we wanted the music to speak for itself.

WWD: What has the process of putting together your second album been like?

A.F.: I guess you have the pressure of it being your second album, but you also have the experience of working on your first album, so you have some writing skills and production skills. So hopefully those things will take it to the next level up.

WWD: What are some of the biggest differences in playing for American audiences?

A.F.: Although America has embraced some dance music, they definitely are more open to the slower tempos that we enjoy making. So that’s good, in a way, because in the U.K. we got known for the Disclosure track [“White Noise”], and we don’t do dance music. So it was hard to kind of produce music that people would think is a follow on from that. So it was nice to feel like we didn’t have to do that anyway, because we were getting some appreciation in America for what we do naturally, which is more hip-hop tempo.