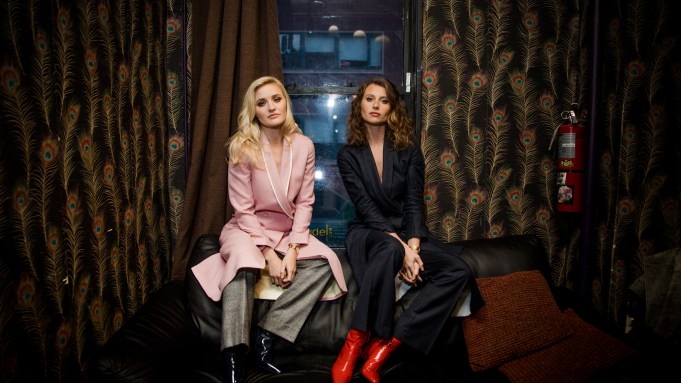 It’s 7 p.m. on a recent Sunday, with two hours to go before sister duo Aly and AJ Michalka (known as Aly & AJ) are set to headline, and the line around Irving Plaza snakes the corners. The crowd is a mix of diehard NYU-types who have followed the sisters since their Disney Channel days, and those somehow unfamiliar with their past but here for the very Eighties-inspired pop the pair have rebranded themselves with.

After spending time with fans, the sisters successfully convince a bodyguard that they are, in fact, allowed to be let up to the dressing room — “I promise we’re legit,” AJ tells him — and enter the room in a hurry, a box of cookies they’ve been gifted in hand.

The duo have a suiting story for their performance looks this tour, changing out of one set for the meet and greet with fans into matching sparkly navy styles for the stage. It’s a riff on Eighties power suits, they say, which is meant to neatly mimic the synth-pop style of their new music.

“And it also just feels good to play in [suits]: you just feel strong and powerful,” AJ says. “It’s funny because a lot of our fans have commented on the suits, that they really connect with it.”

The sound is a far cry from the more straight-on pop they became known for during the late-Aughts. They now find inspiration from the likes of Depeche Mode, Duran Duran, Genesis and The Police — and as the sold-out ballroom downstairs indicates, it’s working.

“Even last night our band members were talking about how there was a girl in the front row that only knew the new stuff but didn’t know the old, which I thought was really interesting,” AJ says. “So it is always a mix every night: you can kind of tell a fan that is from the very beginning, and then a fan that’s kind of new, which is neat for us to see that they’re mixing together in the crowd really well.”

So far they’ve released two EPs under this new direction, “Ten Years” at the end of 2017 and “Sanctuary” this spring, and they hope to have a full-length album out in 2020, pending AJ’s filming schedule.

The music is not the only venture for each of them: AJ currently stars on “Schooled,” a spin-off of her show “The Goldbergs,” while Aly appears on the show “iZombie” and will next be seen in the comedy “Killing Winston Jones” alongside Richard Dreyfuss and Danny Masterson.

“It’s hard. We don’t know how we’re able to juggle it, but we somehow manage to every time,” Aly says. “I think it reassured us that even if both of us are not in the same room at the exact same time, we’re most likely going to be on the same page. Even if we’re a country apart and I was shooting my show in Vancouver and she was in L.A. at the time and a lot of decisions would have to be made, we somehow were able to be on the same page, not in the same room. It still works.”

For the “Sanctuary” tour, which will see them play 40 shows in two months, they’ve partnered with The Trevor Project, the LGBTQ youth organization, to have donation bins and informational booths at each venue across the tour.

“Just knowing that so many of our fans are being reassured that we support them and we support the LGBTQ community, that’s a huge thing, too,” AJ says.

“It’s a culmination of many different things: whether it’s meeting a fan at a meet and greet, and hearing that our music affected them at a really young age and they were in the closet at the time and now they’re out and they’re with their boyfriend at the show. Those are really cool stories to hear,” Aly adds.

It’s just about showtime: Their hair has been “bumped up,” they’ve done a quick change into their show suits and they’ve gone over the tweaks they plan to make from the previous night’s show, in Boston.

Before going onstage there are handshakes, prayers, vocal warm-ups, and then an effort to “connect with each other as sisters,” which takes a variety of forms.

“Just locking into what the other one is feeling in regards to the energy of the crowd,” AJ says. “So, whether that means warming up together and making eye contact, or going over notes from a show that happened the night before, talking about things we want to work on. The hour before, we really review what we want to focus on for the show that’s coming up — and then we kick into gear.”