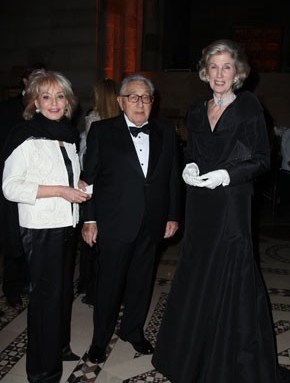 Her beaming husband, Sid, may have been seated in the audience at Cipriani 42nd Street Wednesday evening when Mercedes Bass testified before the crowd that “it was a love affair from the beginning,” but she wasn’t talking about him.

She was referring to her 18-year association with the American Academy in Rome, in honor of which Oscar and Annette de la Renta chaired a dinner that drew social heavies such as Jayne Wrightsman, Nancy and Henry Kissinger, Barbara Walters, Agnes Gund, Princess Firyal of Jordan, John Richardson who as also honored and even the retired Aileen Mehle.

De la Renta made mention of Bass’ recent debut on stage at the Met_as an extra in La Boheme. Just to make sure it was clear where her heart really lies, she later commented, “It was the most exciting night of my life after marrying Sid.”