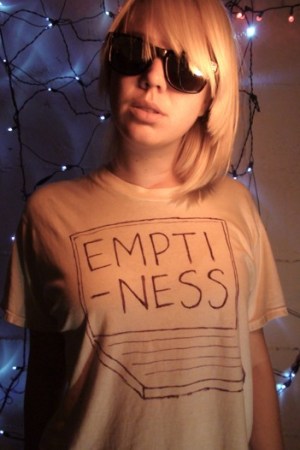 Although reviews of the 28-year-old’s new album under the moniker EMA, “Past Life Martyred Saints,” have been positive, critics are having a hard time placing a label on her music, much to her amusement. It’s a phenomenon she first encountered with her previous project, the Southern California band Gowns, who were known for their unique sound, which was sometimes labeled “noise folk.”

“It’s interesting because Gowns had the same problem — no one could quite describe it, which in some ways sheds light on how silly it is to try to use words to describe music or any piece of art,” she says. Anderson does admit to taking pleasure in her inscrutability. If someone asks her what kind of music she plays, she satisfies them by saying it’s like “digital Velvet Underground.”

The self-taught Anderson began recording her unusual guitar style as EMA last year, following the breakup of Gowns after a five-year run. However one chooses to describe her music, there’s no denying she has a certain raw quality, reminiscent of PJ Harvey’s early work.

“One of my favorite records is ‘4-Track Demos,’ ” she says of Harvey’s 1993 album. “I remember hearing that and being so amazed that something like that would ever be released.”

Anderson says she’s always been intrigued by the background of musicians or songs she came across while growing up in the Midwest. Take George Thorogood, for example. After hearing the blues rock musician’s version of the 1936 Robert Johnson song “Kind Hearted Woman Blues,” she immediately looked into the history of the song, listened to the original and decided she was going to cover it too.

Her 16-minute version, which took a few years and revisits to complete, was the B-side to her March single “The Grey Ship,” an undertaking she didn’t take lightly.

“I’m really interested in what it says about race, gender and technology,” she explains. “Johnson does an acoustic version, Thorogood is mostly famous for electric stuff and then I’m taking it and half of it is feedback, so it’s not even using strings anymore.”

With her newfound solo buzz, Anderson plans on figuring out fashion.

“It’s one of those things that I’m navigating, but I think I’ve always been kind of into it,” she says, acknowledging that the prospect of photo shoots scares her a bit. At six feet tall, Anderson tried her hand at modeling at 16, but hated the experience and found it depressing. She seems to have figured out a way to get through the anxiety of being photographed by often concealing her baby blues with her choppy blonde bob or sunglasses and pairing her thrift store finds with Sharpie-written slogan T-shirts she creates. When performing, she prefers an androgynous look.

“I don’t feel comfortable being overly feminine,” she says. She often opts for T-shirts and shorts over tights and has never worn heels out of fear of breaking an ankle while jumping around on stage. As for her shopping habits, for now she’ll stick with Goodwill rejects by the pound at “the bins.” They’re a cheap way, she says, “to try out a bunch of looks.”