It’s been a circuitous rise to the top, but the 30-year-old musician, who performs this Saturday at Disclosure’s Wild Life festival in Queens, N.Y. is finally making his mark. 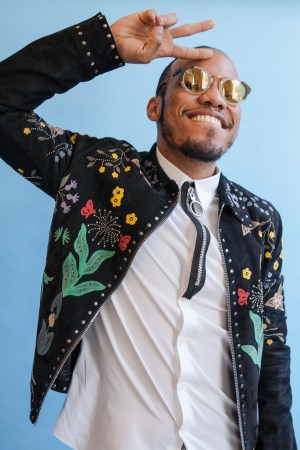 Anderson Paak has no problem taking his clothes off in a room full of people.

During the WWD photo shoot, he slips in and out of ensembles with ease, eager to put on the next and pose for the camera.

“Here’s the sad part — when I have to give it all back,” Paak says, taking off the last look and reluctantly handing pieces from Burberry, Gucci and Fendi over.

Paak, né Brandon Park Anderson, is very familiar with change, but in the past these shifts have been tumultuous rather than glamorous. The 30-year-old singer, rapper and producer, who grew up in Oxnard, Calif. — he’s African-American and Korean — witnessed his father sentenced to 14 years in jail for assaulting his mother when he was a child. His father later died in jail.

Despite that, Paak’s mother was able to provide a relatively cushy life for him and his three sisters by purchasing a produce company. During his senior year in high school things took yet another turn when his mother and stepfather also went to jail for tax-related issues.

Although Paak’s early life was disrupted with uncontrollable ebbs and flows, he’s spent his adulthood embracing change — the self-imposed kind — and using it as a tool to get his foot in the music industry’s door.

“I always like switching it up because I get bored. I think I get that from my mom,” said Paak, who will be performing with his band The Free Nationals on Saturday at Disclosure’s Wild Life festival in Queens, New York.

After spending his Twenties holding an array of odd jobs — one on a marijuana farm in Santa Barbara and another as a drummer for “American Idol” finalist Haley Reinhart — he finally got his big break last year when Dr. Dre heard Paak and producer Knxwledge’s song “Suede,” and asked Paak to work with him on his album “Compton.” Paak collaborated alongside Dr. Dre in the studio and appeared on six of the album’s 16 songs, making more guest appearances than any other artist. Taken with Paak’s talent, Dr. Dre, whose stamp of approval has helped propel artists including Kendrick Lamar, Eminem and 50 Cent into stardom, signed him to his Aftermath record label earlier this year.

Paak’s induction also included a name change (he used to be called Breezy LoveJoy) and a physical transformation. As a teen, the then chubby Paak went by the nickname Bubba.

“I was tired of it,” said the now svelte Paak of being heavier. “I was a virgin until my senior year in high school. I was really popular but I was like, this has to stop. I was really adamant that I wanted to transform myself.”

Paak took a similar approach with his voice, which is raspy yet smooth and inflected with his gospel roots — when he was younger he learned how to play the drums in church. Paak said he dedicated most of his time to producing and rapping before he even experimented with singing.

“Everything outside of drumming was something that I had to avidly just work on to get better. It didn’t come natural at all,” said Paak, who’s married with a five-year-old son named Soul. “I was searching for a tone that could not be duplicated and something that was going to separate me from everybody else.”

The current music landscape is littered with rappers who also sing. Paak still glides between the two, but unlike many of his contemporaries, he sounds like a seasoned singer who sometimes raps. That’s why it was surprising to see him on the cover of rap magazine XXL’s 9th annual Freshman Issue, which was released this week and showcases breakout rappers to watch.

“I feel like what I embody is more than just rapping, but at the same time I will rap and I’m serious about it because I respect the art of mc’ing,” said Paak. “Spitting bars for a lot of people now is secondary or not even a criteria anymore. I wanted to be a part of the cover because I wanted to add more textures and more colors to the palette. It’s a lot of people that do the same s–t now.”

Throughout Paak’s quest for singularity and reinvention, one thing that’s remained constant is his desire to preserve and promote a sound, and look, from the past. Aside from his affinity for vintage clothes, which he charmingly calls “threads,” one of his earliest projects, “Cover Art,” features Paak singing R&B and soul covers of classic folk and rock songs from artists including The Beatles and The White Stripes. And on his critically acclaimed album “Malibu,” which he released in January, he dips in and out of a multitude of sounds — both current and classic — with ease.

Influences from the past are also apparent during his dynamic live performances, where Paak moves from singing to dancing to playing the drums. According to Paak, he’s studied artists ranging from James Brown, D’Angelo and Prince to The Sex Pistols, Janis Joplin and Jimi Hendrix.

“There was a freedom that they had and you don’t really get that a lot now with backing tracks,” said Paak. “I want people to be scared to go after me when I play. I want to lock those stages and kill shit. I want my reputation to precede me.”

So far, it has, and although he’s received praises from artists including Outkast’s Andre 3000 and Puff Daddy — and nabbed precious studio time with Q-Tip — he’s still aiming for more.

“It’s not important so much that I have a number-one song, but I want to make the song that people want to hear,” Paak says. “I think [a number-one song] is going to come though, but in my career nothing has come overnight. It has been a slow bubble and I like that because I’m able to absorb what’s going on and it builds character. But at the same time, I want to win.”