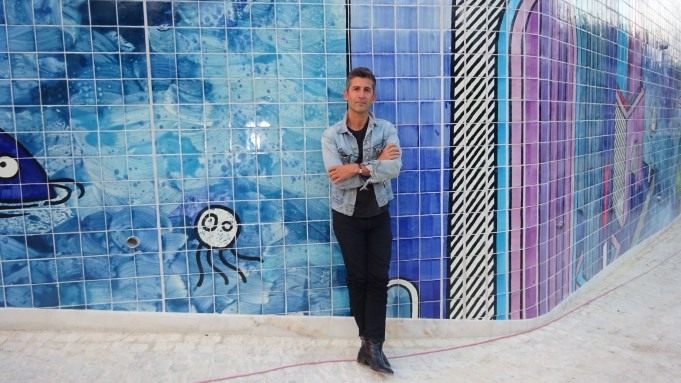 PARIS — André Saraiva has always had a thing about walls. He spent much of his youth in the Eighties daubing them with his trademark bendy, top-hatted-and-winking stick figure, “Mr. A.” But for his latest adventure, the night-life entrepreneur and artist is turning from the transience of spray-can paint to a more durable medium: Portuguese “Azulejos” tiles, made using using techniques dating back thousands of years.

Today, in the historical center of Lisbon, the New York-based artist will cut the ribbon on what he refers to as his “Sistine Chapel.” It’s a 10,000-square-foot wall covered in some 50,000 tiled depicting colorful fantasy scenes inspired by the artist’s universe. (Think cityscapes with skylines mixing buildings – including Club Baron – giant wine bottles and Jacques Prévert books.) Marking a new direction for Saraiva, the vast artisanal artwork, which took more than two years to produce, is being presented as a gift to the city, one that – the artist hopes – will outlive him.

WWD: Are tiles,  your new artistic medium,  the new cool?
André Saraiva: It’s a super-amazing old technique. You put it in the kiln, glaze it and then paint it, and when you put it back in the kiln it brings out these amazing colors. It’s different. It’s the first time I’m painting a wall that will last 10, 20, 30 years. The ceramic technique is one of the most solid ways to do color. They’re ultra-resistant against the weather and time.

WWD: What is your connection to Lisbon?
A.S.: I was born in Sweden, but I have Portuguese roots and always used to come to Lisbon. I love the city and its buildings covered in tiles that are mostly blue in color. I did a retrospective show here two years ago at MUDE, the Museum of Design and Fashion, and at the end of the exhibition told the museum’s director Barbara Coutinho it would be amazing to work with that technique and do a big wall that I could offer to the city of Lisbon.

WWD: What kind of party are you planning for the inauguration of your wall?
A.S.: We’re doing an event with the locals because the wall is on a square where they hold a flea market normally. It’s in the heart of Lisbon but is also a very popular district. We’re inviting everybody from the city and all the neighbors. The mayor will be there and people from the ministry of culture.

WWD: What do walls symbolize for you?
A.S.: The wall is my canvas. For others, it’s paper; mine is the wall.

WWD: What do you think about Donald Trump wanting to build a border wall between the U.S. and Mexico?
A.S.: I don’t know if it will ever happen, and I’m not sure it’s the best idea, but it would create a big surface for coming and writing on… or we could always break it down.

WWD: What twists did you add to Portugal’s “Azulejos” tile tradition?
A.S.: Normally those tiles, which are all painted individually, come in panels of a certain size. I did panels that were more than 200 meters [or 655 feet] long and sometimes 10 meters high, so we had to develop new techniques where I could paint the way I normally paint on canvases, keeping my lines and gestures. We had to keep repeating the process at least 60 times. It was like taking apart a puzzle and putting it back together again hundreds of times.

WWD: Did you create the actual wall?
A.S.: No, it existed already. It wraps around these beautiful gardens by Portugal’s National Pantheon.

WWD: Where did the production take place?
A.S.: In Sintra, a beautiful town near Lisbon, where all the tile factories are based. It took over two years to produce, working alongside all these artisans and learning from them.

WWD: How did it compare to working with a spray can?
A.S.: It’s the essence of painting. You go back to even pre-pigments because what they use to create the color is based on the chemical reaction when the iron is fired and the color it makes. These are techniques date back thousands of years.

WWD: How would you feel if somebody graffitied on your wall?
A.S.: The amazing thing about tiles is that you can clean them off.

WWD: Do you have any similar projects lined up?
A.S.: I think I’ll do other projects like this because it’s solid, it lasts a long time and it’s urban friendly and public friendly. I’m thinking of doing a giant, 20 meter-high easter egg on the side of the Hôtel Grand Amour [in Paris].

WWD: And you’ll be opening a bar in L.A.?
A.S.: Yes, in Silver Lake in mid-November. It’s a project I’ve done with some artists and graphic designer friends and is called “The Friends.”

WWD: Are there any fashion-related projects in the pipeline?
A.S.: I’ve designed a pair of riding boots and a small leather goods capsule for Bally [due out next week] and a T-shirt capsule for Uniqlo – just some drawings.

WWD: What’s your favorite thing to do in Portugal?
A.S.: I have a house in a village near Lisbon and my favorite thing is to go there, take my surfboard, and go and surf.

WWD: Has Lisbon changed much over the years?
A.S.: The thing that is amazing about Lisbon is that, even if more and more people are coming here, it hasn’t changed. It’s not full of branded stores, there are still loads of unique local businesses, it feels very authentic. It’s a city that’s open to the world and the sea, and you feel it.