Beatrice Inn Chef Angie Mar Lays It All Out in Her First Cookbook, ‘Butcher + Beast’

The chef gets personal while sharing recipes and stories from her New York restaurant. 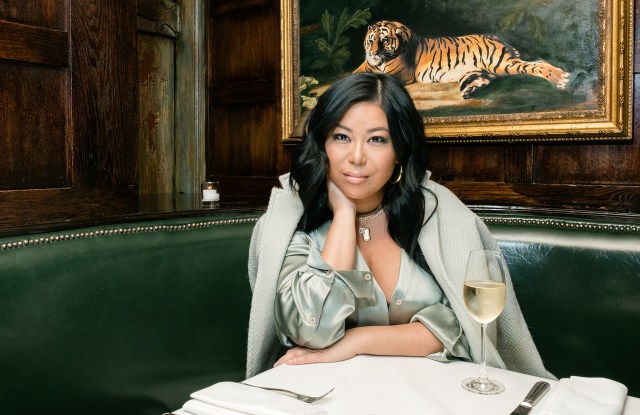 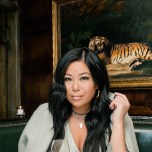 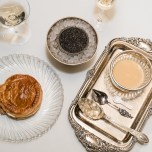 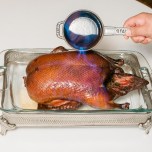 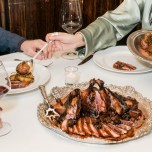 Angie Mar is releasing a cookbook, but the recipes are almost besides the point: It’s about a very particular lifestyle and slice of New York dining. She’s spent several years establishing her voice as the polarizing chef and co-owner at Beatrice Inn, which she and her cousin, Melissa Merrill Keary, bought from previous owner Graydon Carter in 2016. There, in the dimly lit subterranean space of the Prohibition-era speakeasy, Mar revels in extravagant meat-on-meat dining in a clubby atmosphere reminiscent of a fading grandiose era of New York dining. But she isn’t catering to a broader sense of nostalgia — she’s catering to her own sensibilities.

“I’ve always been this person that’s very unapologetic and very ‘This is who I am, and this is the food I cook, and I’m not going to be anybody else but this.’ And I didn’t want to tone that down in the book,” she says from a curved banquette in the restaurant’s bar room before evening service. “That’s when extraordinary things happen: when we’re unapologetic about who we are and our visions we’re putting out there.”

She started working on the book, “Butcher + Beast,” six years ago, initially with the concept of creating a cookbook for the Sunday night at-home chef; things she would cook at home, not at the restaurant. As she worked on it, a large part of the process was advocating for her own voice and having the pages reflect what her restaurant is, and who she is. And she’s OK with the fact that not everyone is going to be able to cook the dishes in the book, all of which have been served at the restaurant at one time or another — Duck and Foie Gras Pies, Foie Gras and Truffle Torchon, Bone Marrow-Bourbon Crème brûlée. More than providing a blueprint for others to re-create the dishes, the book is a record of her creative process. 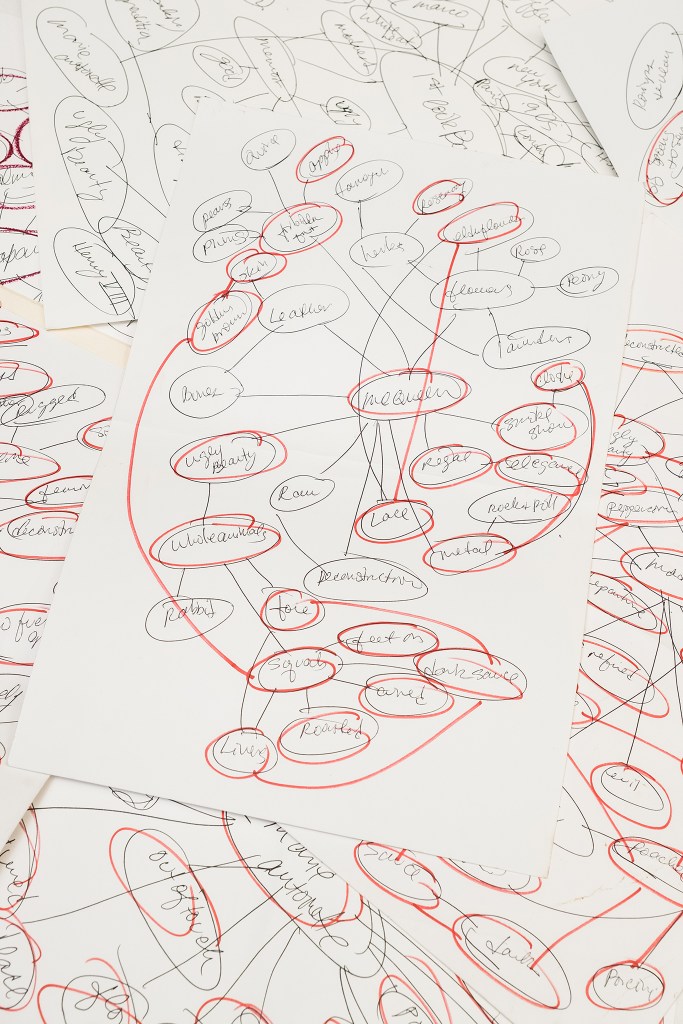 As the types of recipes evolved, so did the scope of the book. Her father passed away, a few weeks before the first draft was due, leading her to reconsider the entire project as she grieved the loss. What was originally just a collection of 80 to 100 recipes turned into an autobiography through food.

“I didn’t even know if I was going to be able to finish the book. I actually contemplated just giving the money back because I wasn’t emotionally able to digest the fact that I had a deadline and had to do these things while I was going through this enormous loss. And out of that came all of these essays,” says Mar, who throughout the book shares stories about her upbringing in a close-knit family in Seattle and the influence of her father, who worked in his sister’s restaurant. Mar’s aunt is Ruby Chow, who was a well-known local restaurateur and politician in Seattle.

“It was emotional; it was a part of my healing process to really write about my family and write about the history of this restaurant, and to write about everything my whole family has been through and what it truly takes to run a business in New York. Going through that loss and writing this book at the same time really gave me an honest opinion of what I wanted [the book] to be,” Mar says. 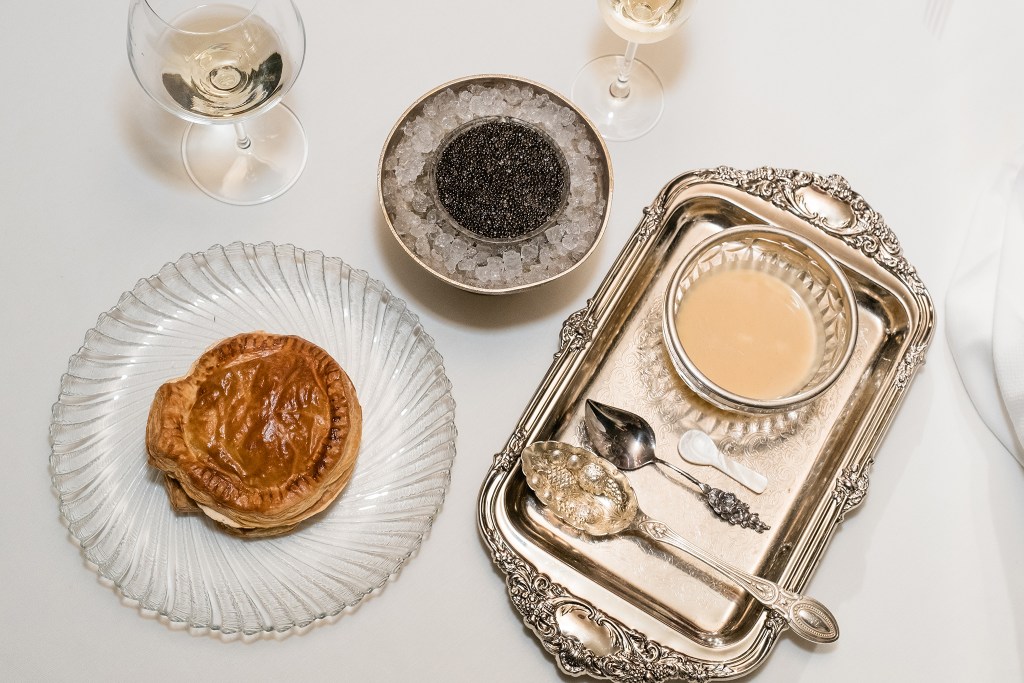 The book also chronicles her relationships with personalities in the food and fashion worlds. Mar is heavily influenced by fashion: a recent addition to the menu, Scallops Alexandra, was inspired by the recent Dior couture collection. She invited many of her recognizable friends and regulars to be involved with the book, including an essay from her mentor, the meat purveyor Pat LaFrieda, and photographs of Daniel Boulud, Peter Som, Diane von Furstenberg and Fernando Garcia, who dressed her in Oscar de le Renta (who was a Beatrice Inn regular) for the cover, in the restaurant.

“This place has always been the gathering place for creatives, artists, designers, people from the food world alike and just New Yorkers. And that’s why we invited so many of them to be a part of this book, because the Beatrice wouldn’t be what it is without those people,” she continues. “I always say I am a very small chapter in the Beatrice Inn’s history, because this place has been here for almost 100 years, and I’m just very fortunate to be the custodian of it in this iteration.”

Asked to choose one recipe that best represents her vision, she quickly points to the duck flambe, a whole duck which is presented to the table, lit on fire, and then whisked away to be sliced up and accented with cherries before being served. 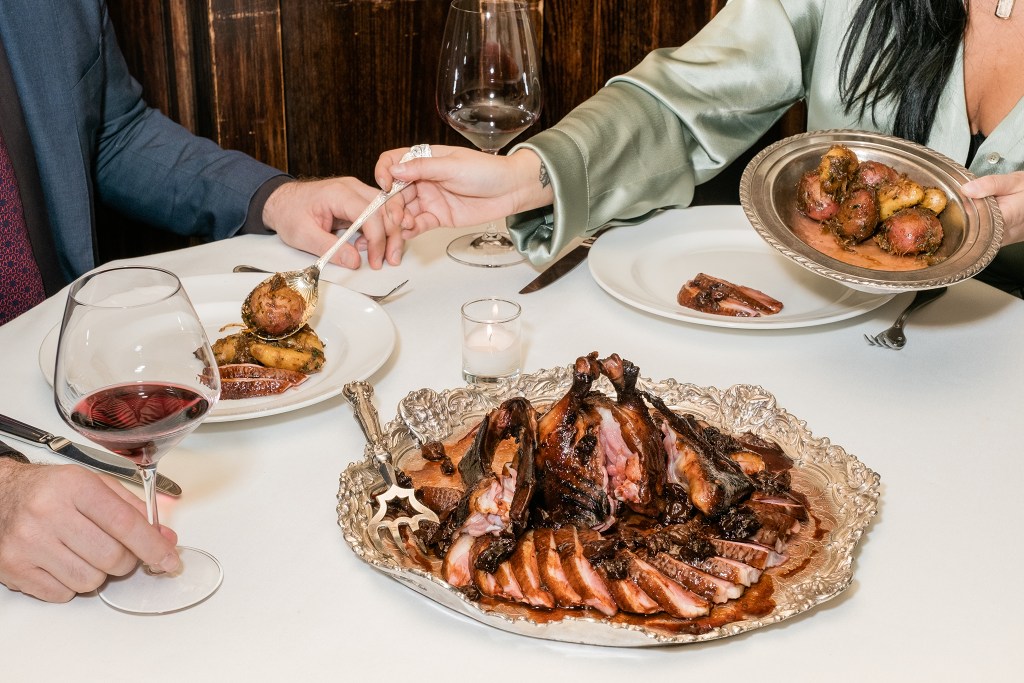 Duck flambe being served at the Beatrice Inn.  Don Stahl/WWD

“It not only represents my heritage — my family, how I grew up — but it’s also become such a pivotal dish with this restaurant,” she says, recalling a memory during the restaurant’s reopening week, when she spotted von Furstenberg and Valentino eating duck wings with their hands.

“To be able to share a little bit of my childhood, my world with people who I admire so much is truly humbling. But especially because it’s not something I thought of last week; it’s not something that I thought of three years ago when I bought this restaurant, it has roots. It has my family in it. So much of this place is truly about family, whether it’s the family I grew up in or the family I’ve chosen here within these walls,” she continues. “And also to be able to share it via this book with people that might not live in New York, who might not ever get here. I hope we’re able to bring a little bit of the world that we’ve created to them through those pages.” 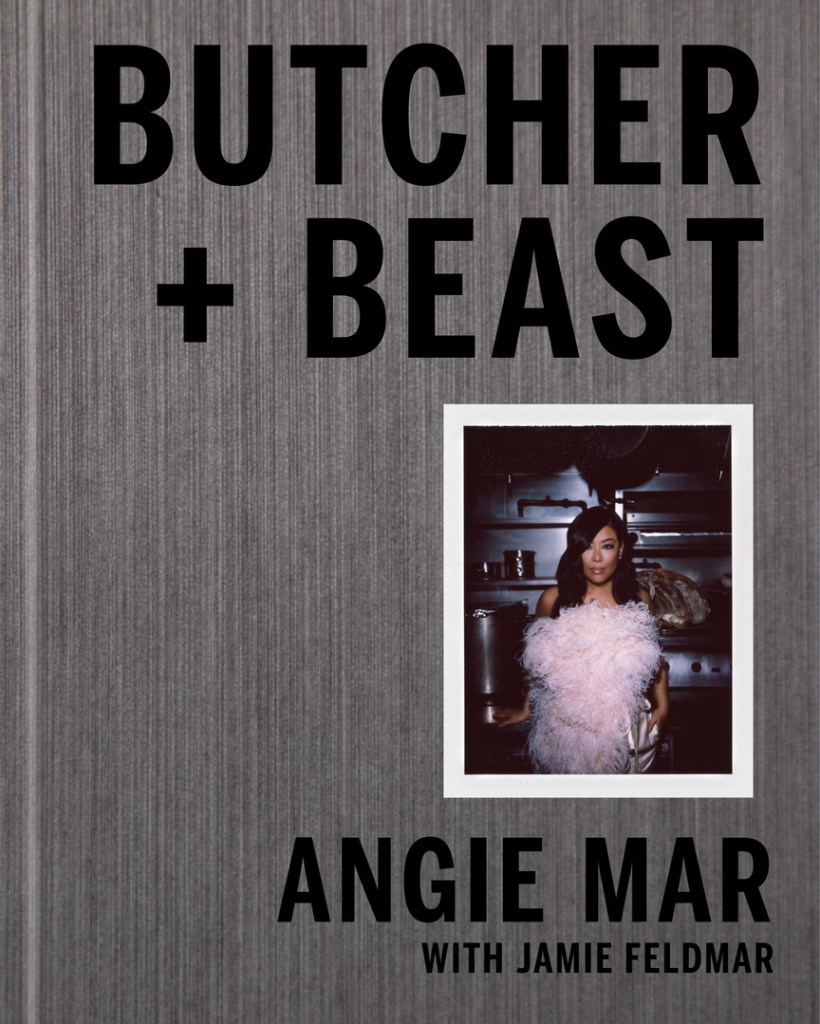 More Feast For the Eye Coverage: