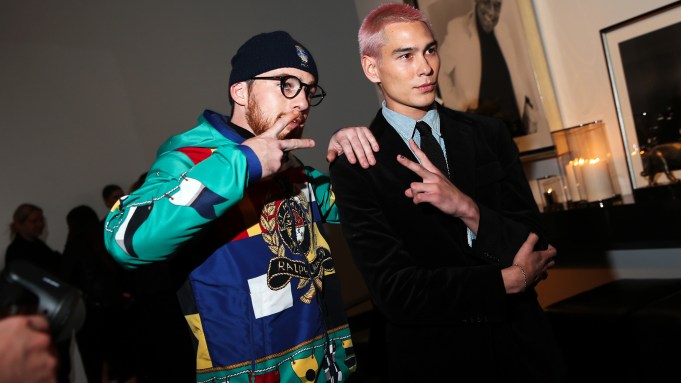 On Tuesday night, Ralph Lauren took his latest collection to the Museum of Modern Art, and invited a group of his friends and family for a swanky night out.

A corner of the museum was transformed through the designer’s singular aesthetic. The show foyer was decorated with framed photographs of Ralph, his vintage car collection and the Empire State Building; brand candles burned nearby. As they entered the space from the elevator bank, VIP guests posed in front of a lounge setup that included a wooden airplane sculpture hovering over a bowl of M&Ms, flanked by two black leather armchairs and large gold pots bursting with white orchids.

The Lauren children — Andrew, David and Dylan — were the first to arrive and welcomed friends of the brand as they made their way past the lineup of photographers and into the pre-show cocktail. Jessica Chastain, who’s up for best actress this weekend at the Oscars, posed with the Lauren family and was soon followed by a tuxedo-clad Lily Collins and her director husband Charlie McDowell; Collins wore a custom Ralph Lauren gown for her nuptials last year. “The Outfit” star Zoey Deutch donned a hot pink double-breasted suit and despite shrugging off press, gamely offered an “I love Ralph Lauren” as she headed show-ward. Janelle Monáe, who performed at the last in-person Ralph Lauren runway show (and featured in the brand’s campaign last spring), wore a black velvet coat with yellow collar pulled from the Ralph Lauren archives. “Good to see you,” offered Dylan Lauren as her husband documented the reunion on his phone.

“We’ve been in cahoots for a long time, and Ralph Lauren has dressed me for some of my iconic looks on the red carpet,” said Henry Golding, donning a double-breasted gold-tone suit jacket from the designer. “There’s just a sense of legacy with Ralph Lauren. His style is so classic and so old Hollywood, that it transcends time. You can almost see this back in the ’50s or ’60s.”

Drawing perhaps the most flashes were “Euphoria” star Angus Cloud and “Gossip Girl” actor Evan Mock. The pair were also notably the only ones to interact with the bowl of M&Ms, each scooping up a handful for the cameras.

Cloud, who wore a suit and Ralph Lauren beanie embroidered with the RL bear, had picked up a vintage chain necklace from the Ralph Lauren mansion earlier in the day. “I guess it used to be an old match holder, apparently, that’s what it said. It’s a cool little lock, and I have a key. So [you can] put something special in there,” said the actor, demonstrating the functionality of the silver container strung on the necklace. It was inscribed with the initials “AEG” and dated 1891.

A more recent, but still slightly vintage, accessory was the actor’s beanie. “This is my hat,” he added. “I actually found this on the ground, and I cleaned it up. I washed it up, I made it mine.”

The Met’s Costume Institute Refreshes ‘In America: A Lexicon of American Fashion’