Talking the Revival of ‘Roots’ With Anika Noni Rose

Tony winner and Disney princess Anika Noni Rose stars this May in the remake of the historic series "Roots." 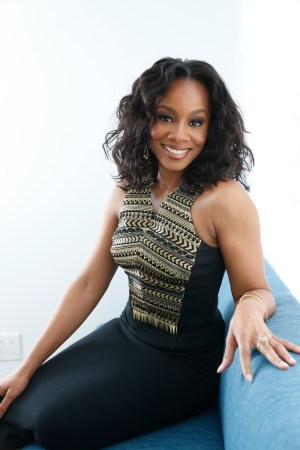 Anika Noni Rose — Tony winner, Grammy nominee, Beyoncé costar and Disney princess — is not the type of actress to find a niche and stick to it. Her résumé includes productions of “Footloose” and “Cat on a Hot Tin Roof”; arcs on “Bates Motel” and “The Good Wife”, and — just to keep things interesting — an early role in “From Justin to Kelly.” None of which, upon meeting Rose, is accidental. “There are some people for whom they are genius, they’ve carved out their niche, this is what they do and they do it brilliantly,” she says, bare feet tucked under her, perched on her publicist’s couch. “For me, I have wanderlust in life, and I have wanderlust in work.”

She’s prepping for a busy summer, starting with playing Kizzy in the History Channel’s reimagination of “Roots,” the 1977 Golden Globe and Emmy-winning slave-trade series that holds Nielsen ratings records for the volume of audiences it drew upon airing. In July, she joins the Starz series “Power,” which set the record for the network’s most-viewed original season debut when it aired last year, and just wrapped BET’s “The Yard,” in which she stars as the lead, as the network moves further into scripted series.

Such a schedule, Rose says, is a moment to appreciate. “I think any actor will tell you that you have times where you feel like everything is happening and it’s great and wonderful, and then there will be times when nothing is happening,” she says. “It’s very much a feast or famine type of situation.”

Rose was raised in Connecticut and studied theater at Florida A&M University and the American Conservatory Theater. Her Broadway breakout, 2004’s “Caroline, or Change,” won her the Tony for Best Featured Actress in a Musical. In 2006, she gained international fame in “Dreamgirls,” starring alongside Jennifer Hudson, Jamie Foxx and Beyoncé in the film, which earned her SAG and Grammy nominations. In 2009, she became the first-ever African-American Disney princess as Princess Tiana in “The Princess and the Frog,” and was subsequently named a Disney Legend in 2011. She was again nominated for a Tony in 2014 for “A Raisin in the Sun.”

“The universe attracts other things, so once you really kick-start and get into a groove, things just start to come together,” she says. “At least that’s what it seems like to me. 2016 seems like a really exciting year for me. I just felt it at the beginning of the year. I don’t know what that means, but it feels like it’s going to be a year of renewal. You know, right now I have three things happening at the same time that are so vastly different, and that is how I like to function — that’s exciting to me.”

When it came to “Roots,” which also features Forest Whitaker, Jonathan Rhys Meyers, Laurence Fishburne, Anna Paquin and Matthew Goode, Rose was initially hesitant of touching such an established classic. “Was [the remake] a bandwagon choice, or were they trying to do something interesting, expansive with it; was there an integrity involved?” she says. Measuring from the passion with which she speaks of the project, the script passed her clearances. “I feel like it’s a great honor to be able to bring this forth for a new generation of viewers, and make this story a story that is poignant and relevant,” she says. “I don’t think that it’s a story — and when I say ‘it,’ I mean the story of enslaved America — that should ever stop being told.”

The timing of the revival, Rose says, is appropriate for where American media and culture is in the current consciousness. “It is a story that is pervasive. And I think out of guilt, out of shame, out of many things, people are either very interested in forgetting it or changing it, which is dangerous,” she says. “But it’s really relevant — I think the repercussions are still affecting our country, the way we see each other, the way we treat each other. When you look at the situation with policing, in particular with young people of color, I can’t see that there’s not a link.”

The remake of “Roots” will have to stand up to the expectations that are demanded of it. And while it is one of many projects for Rose, she is pensive when describing her involvement. “I feel like every time I do something that is historic, that it’s a tribute to everyone who came before me,” she says. “It is a thank you to every person who was strong enough to survive, so I can be on this couch, with a team of people doing my hair and makeup and taking pictures, and being an actor, and doing the things that I do. Because I’m quite certain that those people never would’ve thought that this could’ve been what life would be.”