The artist paints a world where predators and their prey gaze serenely at one another and there is no strife or stress. 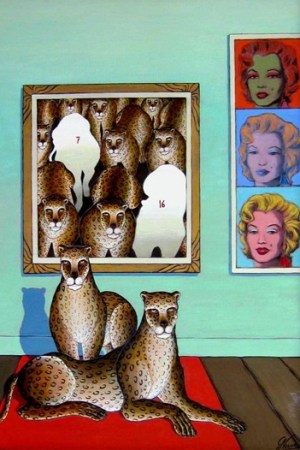 Artist Gustavo Novoa relishes in a parallel universe, where predators and their prey gaze serenely at one another and there is no strife or stress. To Novoa, they are the antithesis of the world of his childhood.

“I didn’t have many friends to play with or sports to participate in,” Novoa says, adding that as a child growing up in a family of lawyers in Santiago, Chile, he was often lonely and frightened. “My parents turned our home into a battleground where they would constantly level their differences, so I had to find refuge in my own parallel universe.”

The Academy of Fine Arts and frequent trips to the zoos in Santiago and New York’s Central Park helped Novoa’s style coalesce into a blend of surrealism and naïve art. Beginning June 15, the Wally Findlay Galleries will hold a retrospective of his work, benefitting Panthera, an organization involved in saving wild cats and their habitats.

“When people ask me to describe my paintings, I say that if [Henri] Rousseau and [René] Magritte had had a child, it would have been me,” says Novoa, who was born in 1941.

While he loved animals, it took some time for them to become part of his visual vocabulary. He moved to Paris in 1960, where he sold his paintings on the streets of Montmartre under the name Jean Marie Gallais — he felt the French would never buy the work of a Chilean artist.

Then, in 1961, Novoa had his first one-man show, sponsored by the Chilean ambassador at the Maison L’Amerique Latine. Queen Victoria Eugenia of Spain sponsored his second show in Lausanne the following year. After that, he started showing his work more regularly in galleries and the Salon de la Jeune Peinture.

In 1965 he moved to New York, where he received several lucrative commissions from Marlboro Books and Macy’s.

“It was commercial,” he admits, but it paid the rent and allowed the artist to open a gallery on East 61st Street in Manhattan.

In time, though, Novoa shed his commercial work and began painting jungle animals exhibiting very unjunglelike behavior. His works have been collected by everyone from Valentino to Prince Charles, Sylvester Stallone to Carolina Herrera and Baron Hans Heinrich von Thyssen-Bornemisza.

Novoa continues to take the animals on new journeys. He borrows the theme of Rousseau’s “Sleeping Gypsy” for his 1995 painting “Dream Within a Dream,” which shows a lion gently nudging a sleeping woman under the moonlight. In his version, a lion and panther on the banks of a river appear to be superimposed over the Rousseau version.

In the 1981-1984 series, “The Grand Tour,” jungle creatures visit capitals and landmarks around the world. “That marked their emancipation from their habitat. They no longer needed to pose by a tree,” says Novoa.

Novoa’s social heyday was when the disco ball at Studio 54 was spinning strong. As a result of the excesses of the Eighties, Novoa sought refuge in Santa Fe, where he painted desert scenes.

The artist was coaxed back to the jungle by some friends, who invited him to Canaima National Park in Caracas. The trip whet his appetite for painting animals again.

“I realized my cats represented me best,” he says. “I created a menagerie that now owned me.”