The actress stars in "Dickinson," a new Apple TV+ series portraying the literary family as anything but typical.

Anna Baryshnikov’s Lavinia Dickinson is not your typical American Romantic woman. To prepare for the part of Emily Dickinson’s younger sister in the new Apple TV+ series “Dickinson,” the actress did the usual research: how to stand in a corset, what kind of house chores were expected of women at that time — but then she also was instructed to toss up a “rock on” hand gesture and dance as one might more at Coachella than the local town ball.

“Dickinson” is a subversive, comedic take on Emily Dickinson’s life, a “unique blend of the past and present,” as Baryshnikov tells it.

“Something I really love about the project is that you’re told often as a young woman that the best roles available to you are ingénues, and ‘Dickinson’ really gave me an experience to be a character actress younger than I would’ve gotten to otherwise,” she says. “And Lavinia is really eccentric and vivacious and a little bit odd — so getting to play all of that has definitely opened my eyes to different kinds of roles that are available instead of the agreeable girlfriend.”

“It’s funny, I had such a streak of getting close to things that I was really excited about, that I had developed a kind of coping mechanism, of breaking up with a project after I left the room,” she says, from a bench in Madison Square Park, back in Manhattan after a photo shoot in Brooklyn. “So I kind of did that and I was like, ‘I left it all on the floor. We could’ve been great together. I love you, bye.’ And then it worked out.”

Baryshnikov, who broke out in “Manchester by the Sea,” says the innovative, time period-bending nature of the show allowed her to think of Lavinia in a grander context.

“Ordinarily on a period piece, I would try to only imagine the character within that decade — versus for this show, I could say things like, ‘OK, I think Lavinia would worship Ariana Grande,’ and that was still relevant and useful.” 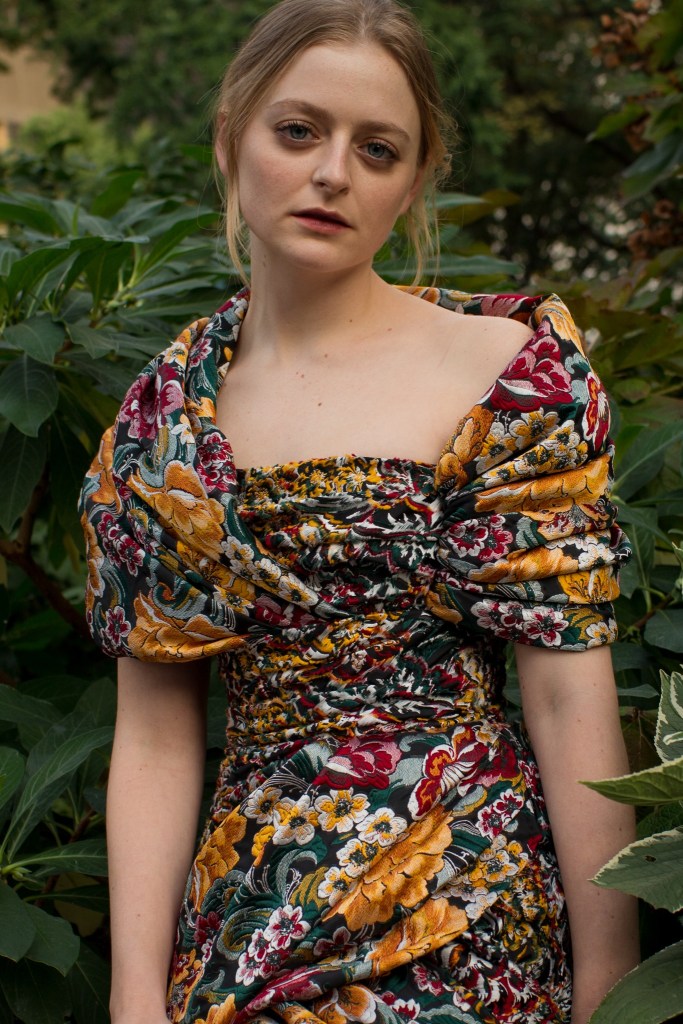 The 27-year-old, who grew up in Rockland County, N.Y., says she began saying she wanted to be an actress before she actually understood what that even meant.

“My first real experience was this neighbor of mine who was starting a children’s Shakespeare group, and she needed the youngest kids in the neighborhood to play the fairies,” she says. “She recruited me to play Peaseblossom. My babysitter at the time had told me to project as though my grandfather was in the back of the theater because she was nervous that no one would be able to hear me. And in this kind of quiet ethereal scene, I truly screamed my lines and the audience laughed. It was not meant to be funny, but that kind of exchange between me and the audience…I just remember feeling so excited by.”

She was “desperate” to work as a kid, but her parents insisted she stay a student. She continued with school plays, and went on to study theater at Northwestern before turning pro.

Based on research, and expanded upon with creative license, Lavinia is very in touch with her sexuality, for a women of that time, and very excited by her social life.

“There’s something about her that feels so true about being in your 20s to me, which is, she’s really trying to figure out who she is, but whoever she decides she is that day — she kind of wears that with a flaming badge of honor,” Baryshnikov says. “She’s throwing herself out there constantly and also pretty insecure and unsure of herself. She’s easy to underestimate, but she has a ton bubbling under the surface.

“I think as a young woman, you’re underestimated all the time,” Baryshnikov continues. “And especially, she has some qualities that I feel like we would maybe call basic. She loves fashion. She really wants to be in a relationship. She kind of has a “keeping up with the Joneses” quality socially, but at the same time, it was fun to then approach those qualities that I think we’re very quick to judge women for, and I really tried to inject them with as much compassion and humor as possible.”