Reeve Lindbergh spent the better part of four years poring over her mother’s personal papers before completing the sixth and final installment of her diaries.

By Rosemary Feitelberg on May 21, 2012
View Slideshow 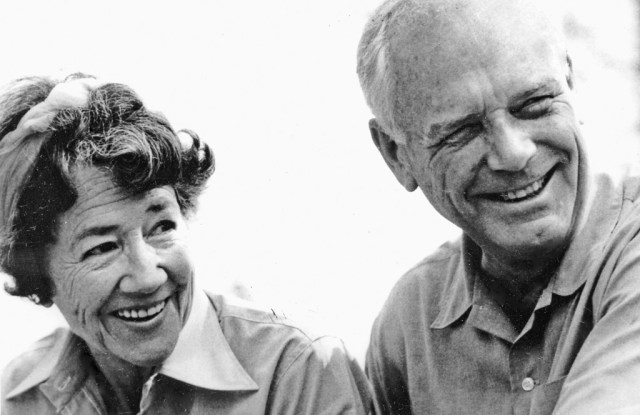 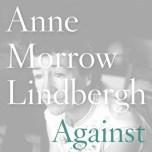 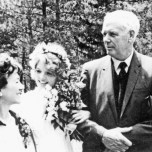 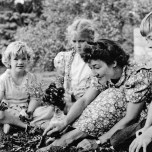 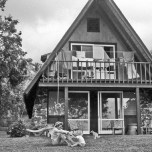 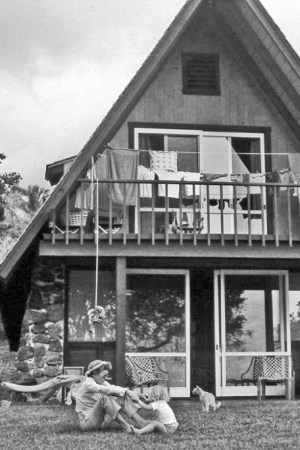 Anne with her daughter Susannah on the lawn in Maui in 1978. 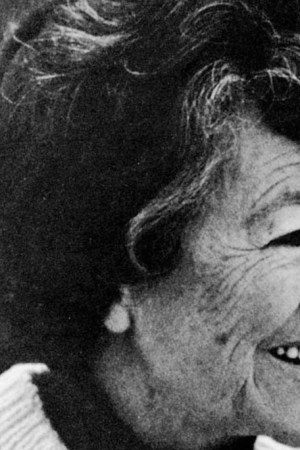 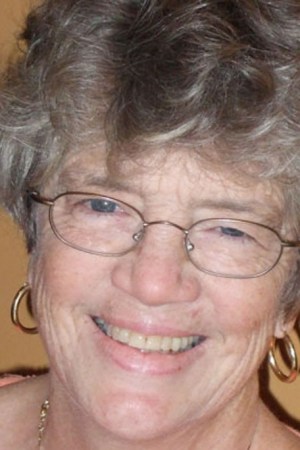 Anne Morrow Lindbergh’s high-flying husband Charles may have grabbed all the headlines, but she wrote reams of journals and letters throughout her famed, and sometimes troubled, life.

The sixth and final installment of her diaries, “Against Wind and Tide: Letters and Journals 1947-1986,” reveals more about the New Jersey native’s life well past her Chapin School-Smith College years. An international author and accomplished aviator in her own right, Morrow Lindbergh’s feats were somewhat eclipsed by her husband’s early fame and later notoriety. The kidnapping of her 20-month-old son Charles Jr., who was born on her birthday, cast another long shadow on her life, but Morrow Lindbergh managed to move forward, according to Reeve Lindbergh, the youngest of her six children.

With the help of her brother Land, niece Kristina and friend Carol Hyman, Reeve Lindbergh spent the better part of four years poring over her mother’s personal papers before completing the 339-page Pantheon-published book. Known to write three to four long letters a day, Morrow Lindbergh was already putting the smiley face to good use in one to her husband in 1949. Multifaceted as her life was, she could nonchalantly describe copiloting flights with “Lucky Lindy” to open airline routes in one sentence and then having to deal with the unexpected crisis of goldfish in the toilet bowl in the next.

Perfectionism in household tasks and clutter were big time wasters in her book (and understandable considering she had to move her family 19 times to keep up with her husband’s intercontinental lifestyle). But from her perspective, “trying to live by other’s people standards” was an even worse offense. “Should one put things in one’s mind to please other people? Read books to please other people? Or go to parties to please other people? By the time one reaches a certain age, one should be able, as Marianne Moore said, ‘to have the courage of one’s peculiarities,’” wrote Morrow Lindbergh, who died in Vermont in 2001 at the age of 94.

En route to Manhattan for a book reading and Friday’s celebration of the 85th anniversary of her father’s historic transatlantic flight at the Explorers Club, Reeve Lindbergh took a break from an impromptu shopping stop to discuss “Against Wind and Tide” and her fabled family.

WWD: Did you say you are shopping?
Reeve Lindbergh: Yes, I just left a talk at the New Canaan Library and on the way into the city, my friend and I decided to stop at Green Eileen in Yonkers. They sell gently used Eileen Fisher and all the money supports women and girls. I’m looking for everything. I love Eileen Fisher but it’s fairly pricy. Since we were driving this way, we decided to stop. I found a couple of sweaters, a beautiful pink dress and a little jacket. My friend is still looking so I asked if there was a quiet place in the back where I could talk.

WWD: Why did you decide to do this book now?
R.L.: I had finished my last book, “Forward From Here,” and we stopped at Yale to see a friend who is the archivist for my parents’ papers. It just seemed to me that the last half of my mother’s life had not been represented, not to downgrade “Gift From the Sea.” We wanted to address the years when she raised her children, grew as a writer and the contrasting feelings she had as an artist, a woman and a mother.

WWD: What was a typical night at home growing up in the Lindbergh house?
R.L.: I am one of five children [after Charles Jr.’s death] and we were all very busy. My brothers had guinea pigs, snakes and turtles. My sister played the piano very well so that might have been going on. When my father was home we would all eat dinner together. He was strict, strict. He always had a list of things for each of us about what we should be doing, like not leaving our skates on the lawn. That was a big one. He would call us each into his office and go through the list. Or sometimes he would give you a lecture called “Freedom and Respect.” “The Downfall of Civilization” was another one which went on for some time. He would go on and on. You would have to look interested or try to look interested. Once he was done, you would go out and the next person would come in. He was quite the classic 1950s militant father. We would all kind of snap to when he was around. Then he would leave again and we would all relax a bit, even my mother.

WWD: Did anything catch you off guard when you were pulling the book together?
R.L.: It was a joy. It really was a joint effort and quite a big undertaking. Sometimes it was painful to look at some of the pieces about particular times in her life or our lives that were difficult. But those were also some of the most direct and lovely writing of hers. It was a treat.

WWD: What might be an example of something that was tough to read again?
R.L.: I lost a child in the mid-Eighties, a little boy, and her writing to me at that time was so stark, painful and beautiful. He was almost two and had cerebral palsy from infant meningitis. We thought he was getting a lot better and then he just died in the middle of the night. She of course was very helpful because she lost a son at that age. What she told me was, “You die. A part of you does with that child and you are reborn with other children. You can’t deny that death. You can’t behave as though you have forgotten. The horror, pain and memory remain but you move beyond that.”

WWD: Did your mother ever speak of the kidnapping?
R.L.: People have asked me to talk about the case but I know very little. I read Scott Berg’s biography of my father. That was heavily researched. But I don’t think my father ever spoke to me about it. My mother only talked about it in connection to my own grief. I know a friend of hers told me that she didn’t believe it was intentional. She thought it was an accident. She was never a death penalty proponent. She was very distressed that [Bruno] Hauptmann was executed. She felt there had been enough death. But she didn’t talk about it with me.

WWD: Many people would consider the kidnapping to be one of the definitive moments in your mother’s life. What do you think she would consider the definitive moment to be?
R.L.: Marrying my father. She met him in Mexico City when she had come home for Christmas from Smith [College.] Her father was the ambassador to Mexico and Charles Lindbergh had flown there on a goodwill trip after his famous flight. [Dwight Morrow had also been a partner at J.P. Morgan and he was later a U.S. senator.] In her diary at that time, she recalled, “He is taller than anyone else — you see his head in a moving crowd and you notice his glance, where it turns, as though it were keener, clearer, and brighter than anyone else’s, lit with a more intense fire.…What could I say to this boy? Anything I might say would be trivial and superficial, like pink frosting flowers.”

WWD: Did anything strike you about the way she wrote?
R.L.: Early on [in her writings] it was odd to see how she was more reticent and self-deprecating. She told me once how he was the knight and she was the page. But through this book, you see how she became a more liberated woman, though I don’t know that word applies to her. She was bigger than that.

WWD: What would most surprise people about your mother?
R.L.: Her strength would be surprising and her ability to understand him. She was quite tolerant about his needing his own space and his own life. She wanted him to feel free, which was fairly sophisticated for that time. But I don’t know that she thought that meant to go out and have three secret families.

WWD: Do you think your mother was aware of your father’s other relationships?
R.L.: I don’t think so. Someone once told me she knew something but she didn’t know what she knew. She didn’t know what or where but she may have chosen not to.

WWD: One of your mother’s 14 books, “A Gift From the Sea,” has sold more than three million copies and is available in 45 languages. What made her write about the role of women in the 20th century while vacationing on Captiva Island in 1955?
R.L.: I think she felt that she had to write it. I don’t think she knew how important it was over time. The book is very short but you find something new to it every time you read it. She was very perceptive about her own thoughts and feelings and experiences, and those of other people. That talent or gift for her had to be expressed or reported. She used to say she didn’t think anything was real until she wrote it on paper.

WWD: Did your mother have any hidden talents?
R.L.: She painted very well and was a sculptor. When my father was consulting with Henry Ford [on B-24 bomber planes], my mother studied art at Cranbrook. She was also a glider pilot. She was the first woman in America to be one [in 1930]. She absolutely loved it. She said it was more fun than flying in airplanes. As part of the war effort, my father was always involved with aircraft design and throughout his life. He worked with Pan Am at one point, too.

WWD: What do you hope readers will glean from this book?
R.L.: I think recent widows will be comforted. There is a long section on widowhood and how you progress. And people who are going crazy with children might be amused by some of her stories. Some might be interested in her response to the Kennedy assassination. Obviously she was devastated by it. Everyone was devastated. There are several sections about getting older and how we respond to our [own] aging. She had always wanted to write a book about that, so I guess this is it.

WWD: Some people carry around advice their parents gave them. Is that the case with you?
R.L.: I quite often think of my mother, of her openness about life as it progresses. She was always open and flexible. She believed in not being afraid to live for the whole of your life. She is very much with me.