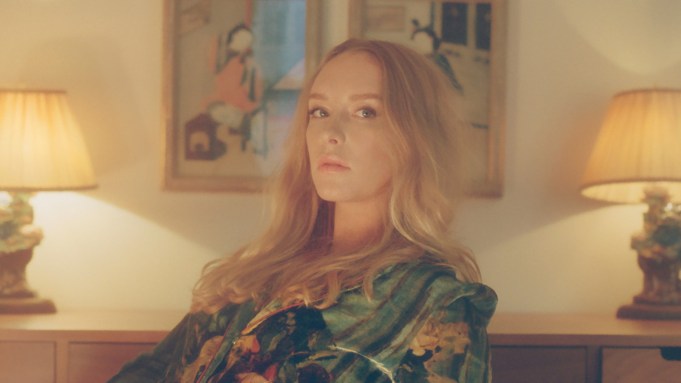 Annie Starke is a dog lover. An owner, too — to a yellow English Labrador, named Big — but a lover whose passion expands beyond Big to an involved relationship with the organization Puppies Behind Bars, a cause she weaves seamlessly into conversation. She’s been a dog lover since childhood when, while tagging along with mom to work, she got to spend hours on end covered in puppies. A perk, surely, of being Cruella de Vil’s daughter.

The days on the “101 Dalmatians” set have not only informed a lifelong commitment to pups but ignited a curiosity for acting in Starke that is now on the cusp of being a full-on career.

Starke, the only child of six-time Oscar nominee Glenn Close and producer John H. Starke, is in her mother’s apartment in Greenwich Village, where she stays while in town from L.A., chatting over the new Gorillaz album about an upcoming trip to Mexico she’s due to take with her fiancé Marc Albu, a management consultant, for some R&R.

She’s up for a busy 2018: Starke will turn 30 next month, is getting married in June, and come August, will be back on the promotion trail for her first major feature film role, as a young Joan Castleman — the same role played in the movie by her mother — in “The Wife.” The film, based on the 2003 Meg Wolitzer novel, premiered at the Toronto Film Festival in 2017 but was held by Sony Classics for an August 2018 release, where it is expected to enter next year’s Oscar race.

Growing up on the sets of her parents’ films was just the push she, a naturally “very animated person,” needed to decide that acting was for her.

“It was certainly an interesting childhood — a never-a-dull-moment kind of thing,” she says of trailing along for a day on set as a kid. “I’ve loved to put on shows ever since I was two or three. It just was a seamless, runs-from-the-blood realization. I’ve known forever.”

Luckily, it didn’t take much convincing of mom and dad. “Obviously just knowing me as their child I’m sure they were not surprised one bit. Of course, my dad being a protective dad, and he’s also a producer, he’s seen all kinds of angles of the industry. He was a little trepidatious about the whole thing; I think he was hoping I was going to do something else,” she says. “But bless him, he’s gotten over it.”

“The Wife” is not the only project Starke and her mother have worked on together: they both appeared in a Stella McCartney campaign last year, and are heavily involved in Puppies Behind Bars, which has long-term inmates train service dogs for war veterans and bomb-sniffing dogs for police departments. But the idea of launching her career alongside her mother was not exactly how she saw things going initially.

“I was thinking of saying no a few times, during its development stages,” she says of the role in the film. “It’s an interesting thing, playing a younger version of your mother. It’s an interesting concept. I adore my mom and love her in every capacity, but it was just something that had never crossed my mind.”

The part itself was too good to pass up and besides, given that she and Close play the same character at different stages of life, they never once overlapped on set.

“Quite frankly, I just kind of thought to myself, you’d be a total idiot to turn this down,” Starke says. “I’m so glad that I decided not to be an idiot that day.”

There’s also something to be said for having a mother-daughter duo take on the same character, for the sake of character continuity.

“Obviously having known each other for quite some time, it wasn’t hard,” Starke says dryly.

She describes the role of Joan Castleman as “really beautiful and dramatic,” and hopes there is some variation in her future.

“I’ve always wanted to do some comedy — that’s a huge goal of mine in life. But also just having done this special film, I’ve kind of switched my thinking,” she says. “It’s interesting — I also at the same time totally want to be some kind of female knight, charging forward and leading an army. So I’m kind of all over the place.”

Blake Lively On Why She Chooses To Be Her Own Stylist