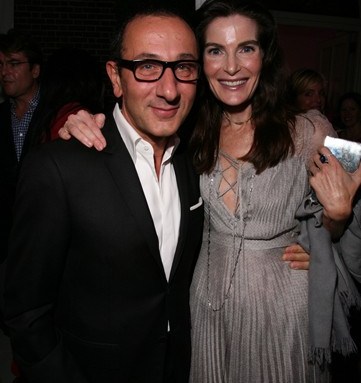 Guests at the Museum of the City of New York’s “New York After Dark” cocktails Tuesday night expecting the usual champagne concoctions and outdoor dancing found a surprise waiting for them. Posted outside the upper Fifth Avenue mansion was a vocal and incensed pack of 25 protestors — sans permit, according to one observer — complete with signs and a take-no-prisoners attitude.

One well-heeled lady related hearing a voice scream,“Die socialite, die!” as she made her entrance. (According to a spokesman for the group, this was not one of their approved chants, which included “Fashionistas and socialites,
Leviev denies human rights.”)

“It certainly adds some color,” said one partygoer.

“It was very scary,” said Jamee Gregory, once she was safely ensconced in the museum’s newly renovated terrace. “And I didn’t even know what they were yelling about.”

It turned out the rabble-rousers were from a group called Adalah-NY, denouncing alleged West Bank interests of Lev Leviev, the founder of co-sponsor Leviev Diamonds and owner of many other holdings.

But their cries only put a momentary damper on the otherwise tranquil affair, which raised $310,000 for the museum. Attendees like Gregory, Helen Schifter, Shoshanna Gruss, Renée Rockefeller, Marjorie Gubelmann, Lisa Airan, Jennifer Creel and Marina Rust sipped wine and enjoyed the dinner buffet, while Gilles Mendel — whose house J.Mendel  cosponsored — was breathing a sigh of relief, having initially thought the welcome wagon was from People for the Ethical Treatment of Animals.

“I didn’t know they protested anything except fur,” he said, martini in hand.