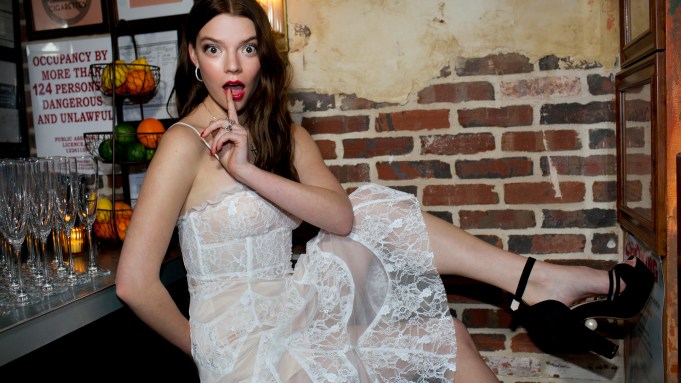 “I’m very much a people person,” begins British actress Anya Taylor-Joy, upbeat and immediately chatty over the phone from Los Angeles. “I really trust my instincts when I meet somebody, and the second I met Cory, I just adored him.”

That would be Cory Finley, the director of “Thoroughbreds,” in which Taylor-Joy stars alongside Olivia Cooke. The dark comedy-thriller premiered at Sundance in 2017, and on Friday had its limited release. The film, Finley’s feature directorial debut, has garnered rave reviews for its stars’ performances of two misguided upper-class teens in Connecticut who hatch a murder plot.

“It was so witty and sharp, and superdeliciously dark and nasty,” Taylor-Joy says of the script, which she read while filming the Barack Obama biopic “Barry” in New York in 2016. “And the fact that it was between these two women that were just continuously circling each other and manipulating each other through dialogue, I just thought it’d be really fun to play.”

A day after wrapping “Barry,” she was in Massachusetts filming “Thoroughbreds.” She spent two days with Cooke hashing out their characters’ back stories, which helped to build their chemistry on-screen.

“The dialogue is so unrelenting and Olivia and I are so on top of each other with it — it’s very quick-paced — that by the end of that first day we were just so physically and emotionally aware of one other, and we became quite symbiotic actually, and it’s something that hasn’t gone away,” she says. “We still have this thing where when she moves, I move. I step with my left foot forward, she does the exact same thing at the same time. And I wonder if it will ever go away, but it definitely worked for the movie.”

Taylor-Joy describes their characters as “toxic.” In one scene, Cooke’s character shows Taylor-Joy’s her method for crying on demand, a manipulation tactic.

“Olivia and I both tried it, I don’t think it’s an actual thing, I think you just sort of have a panic attack because you’re not really breathing, so rather than having tears come out of your eyes you’re just like, ‘I’m going to die,'” says Taylor-Joy. “That scene actually comes from when Cory was acting in college. He had a couple of friends who used to boast that they could cry on cue, and this is how they did it — but I don’t think there’s much truth in it.”

While the two girls are the stars, the movie also features Anton Yelchin in a supporting role, his last prior to his unexpected death in summer of 2016. The film is dedicated in his honor.

“It’s very difficult to talk about him as a person, because he’s my friend and I deeply miss him,” says Taylor-Joy. “But from a professional point of view, I can say that he was unrivaled in his ability to bring so much energy and enthusiasm. He’s just such a lover of film, so the second he got on set we all just fell in love with him, both as a person but also we’re in awe of him as a performer. And he took a character that when I first saw the script, Tim [Yelchin’s character] in the hands of a lesser actor could have been far more of a minor character, but…[Yelchin] has an incredible ability to imbue his weird, sort of strange characters, with a lot of heart.”

Taylor-Joy, who broke onto the scene with her lead role in A24’s horror film “The Witch” and M. Night Shyamalan’s “Split” last year, won the Chopard Trophy award for promising young actors at the Cannes Film Festival in 2017. This year promises to be just as eventful: she has five films coming out between now and the beginning of 2019.

“Dude, I know, it’s crazy to think about,” she says. She’s also filming period film “Radioactive” with Rosamund Pike, and is slated to star in Kristin Scott Thomas’ directorial debut, “The Sea Change.”

“I’m very instinct-character-driven,” Taylor-Joy adds of her choice of projects. “I’ve never made the decision to go for genre, or films that are darker — it just so happens that the worlds these women that have called to me have inhabited are dark worlds. I just follow my characters wherever they decide,” she adds. “And do they inhabit a world I’m interested in exploring, and then how awesome is the director? If he said jump, would I? That kind of feeling.”