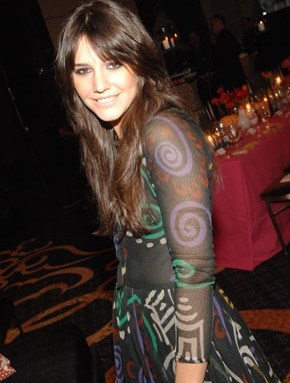 The New Yorkers for Children’s “Fool’s Fete” may be a Manhattan charity circuit favorite, but this year it drew a flock of young Euros, thanks in large part to sponsor Missoni.

Sure, all of the usual suspects including Helen Schifter, Jennifer Creel, Coralie Charriol Paul, Zani Gugelmann, Fabiola Beracasa, Olivia Chantecaille, and honorary chair Dayssi Olarte de Kanavos (who will pass her duties on to Marisa Brown and Susan Shin) were there perusing the silent auction. But holding court at a center table in the Mandarin Oriental’s Ballroom were Tatiana Santo Domingo, Andrea Casiraghi, Jennifer Missoni, Eugenie Niarchos and Andres and Lauren Santo Domingo, joined by a few New Yorkers for good measure like self-described “Bronx girl” Joy Bryant.

The actress Leighton Meester tried on singer Maxwell’s nerd chic glasses. Despite having shot many a party scene for “Gossip Girl,” the young starlet made it clear she and her alter-ego Blair have very different social tactics.

“Everyone expects me to be a diva,” she said. “So I’m extra friendly to show I’m not.”

Mary-Kate Olsen had come straight from a photo shoot, from which she borrowed a Marc Jacobs headband and Yves Saint Laurent heels (her dress came from Margherita’s personal archive).

“I had nothing to wear,” she explained, between sips of Amstel Light.

Harvey Weinstein and Georgina Chapman, Keren Craig and Alex Kramer were on hand for the fete, which had been planned within an inch by a gigantic marketing team.

Photographs of Jagger posing suggestively with her Jagger dagger were placed at every table, dagger-wielding dancers chopped at giant blocks of ice all over the room, and lights projected Belvedere’s logo over the bar.

Tara Subkoff was definitely in on the joke. “My favorite vodka is Belvedere,” she said. “I’m joking, I’m joking.”