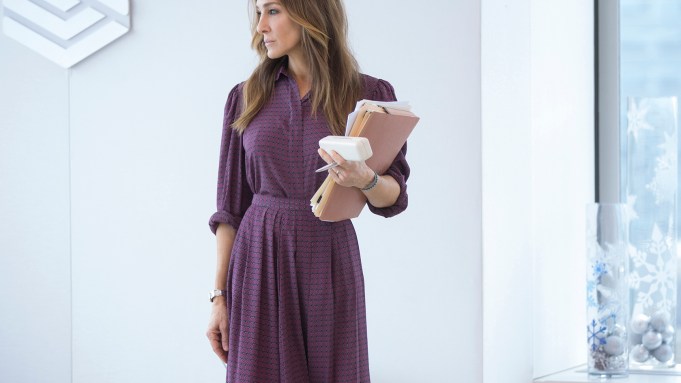 Sarah Jessica Parker makes her return to HBO on Oct. 9 with the network’s premiere of “Divorce.” Parker plays Frances, a woman who has recently decided to divorce her husband, in the comedy series. We caught up with costume designer Arjun Bhasin about the inspiration behind the show’s costumes and whether or not “Sex and the City” played a role in his — and Parker’s — sartorial choices.

WWD: What did you look to for inspiration in costuming the show?
Arjun Bhasin: As a costume designer, you always respond to the material and the characters in the script. Those are the things that are paramount. Then, I look a lot at photography and old films. We talk a lot about what we want the characters to feel like rather than look like, and then we build the characters out of how we want them to feel. Sarah Jessica talked a lot about the films of the Seventies, so we ended up looking at a lot of that. We felt like there was a certain element of nostalgia in the story of “Divorce” and we wanted to use the films of the Seventies as the backdrop for that. So it’s not really about the fashion of the Seventies, it’s more about the vibe and the mood of it.

WWD: Which Seventies films in particular served as inspiration?
A.B.: There was one film that Sarah Jessica loved called “An Unmarried Woman” from 1978. That one was important. For me, “Kramer vs. Kramer,” some of the 1970 Woody Allen films, “Annie Hall,” “Interiors.” They felt very New York-y, very wintery and had that kind of tactile elegance of New York….Another reason why we went to the Seventies and we started looking at inspiration from the past was to create a sense of nostalgia about the past life of these characters — how long they had been together, when they got together, what their history was. When I was looking at a few episodes of the show, it almost looks like a contemporary period show. It feels very much like it’s about the past, which is lovely.

WWD: When I think of divorce or breakups in general, I think of sweatpants, pajamas, ice cream, lounging attire. Did the notion of a stereotypical breakup uniform play into your choices at all?
A.B.: No, actually it didn’t at all. I felt like with Frances, the character, what happens is she has to get on with her life. She can’t stay at home and mope around. It’s really about a day-to-day activity, getting on with it, making the decisions that need to be made, dealing with work, dealing with kids, dealing with the logistics of divorce. The design of the show very much reflects a working woman who has to come to terms with life.

WWD: How would you say Frances’ personal style progresses throughout the show?
A.B.: The show takes place in a very short span of time, so I don’t think she changes drastically in design from the beginning of the show to the end. I think that can be explored in further seasons. It’s all really about the circumstances of the things that she’s going through and what happens from day to day. That’s the exciting thing about television. You don’t really know what happens next. It’s not like film, where you get a full arc of a character and you know what the end, middle and beginning are. You start a TV show in the middle. The characters are having a crisis, they already have a past and you don’t know what their future is gonna be.

WWD: What were some of the key pieces you used?
A.B.: We wanted there to be a certain elegance to [Frances], a certain femininity, a certain sophistication, so we did dresses and subtle prints. There’s a lot of softness to the character, so we did flowing fabrics, silks, silk blouses. But again, we wanted to have that Grace Kelly or Katharine Hepburn style, so we did a lot of pleated trousers and miniskirts and Seventies boots. Because it’s a winter film in New York and the coat in New York becomes such an important statement of a person in winter, we wanted to play up the idea of what the coat signifies and how many coats a woman actually has in a season. The coats became an important emotional tactic that we could play with. Does [Frances] have a dozen coats? Is she the kind of woman who changes every day or is she someone who is quite steadfast in the way she thinks? We wanted the latter, so we ended up just using a few coats that we thought were really symbolic and important to her.

WWD: That’s true. The winter coat is such a big part of New York fashion and you barely think about it until winter comes.
A.B.: Exactly. We also wanted a person who felt really relatable. I feel like a lot of the show is about reality, about what really goes on with people. The idea of that winter coat becoming the thing that you put on every day, day after day. It shows the monotony of winter and of your life. The same coat going over every single thing created an interesting story rather than it being a fast-fashion thing, where she keeps changing and looking different in every scene.

WWD: People heavily associate Sarah Jessica Parker with fashion. Do you think “Divorce” will further that association?
A.B.: I think the show is incredibly fashionable. I think it’s very different in aesthetic from the previous show and I think that was really what drew me to it. That’s what makes it really exciting for me — that it’s a different type of fashionable. It’s interesting that SJ decided to play this character who is interested in shedding her past and going on to something else. [Her character is] getting a divorce and she’s moving on to become a different person. We had to show that categorically in the design because it was a totally different person. [Parker is] playing somebody else.

WWD: Did knowing how big fashion was in “Sex and the City” affect your approach to “Divorce”?
A.B.: I decided right from the beginning that we weren’t going to do big fashion labels and big fashion brands. Instead, we were going to look to the past. In doing so, we ended up doing a lot of vintage work because I thought that was a way of pulling in design and interesting ideas without it having that speed of contemporary fashion. It’s kind of old world-y feeling. I did a lot of shopping in vintage stores, through vintage dealers, at flea markets, antique shows, that kind of thing. We also wanted to create the idea that [Frances is] not someone who’s out shopping all the time, but she bought a few pieces that she thought suited her and those are the things that became her personality, as opposed to her constantly reinventing and changing.

WWD: Do you have any favorite stories from working with the cast?
A.B.: It was such a daunting task for me to work with Sarah Jessica because you know her as a style icon. I didn’t realize until I started working with her how thoughtful and authentic she is to the process of making films and making a show. She’s so very true to the moment and so very true to what’s going on with the characters. It was exciting to discover that in a person and to be able to see that and feel that for my work. That was the most exciting moment for me where I was like, “You know what? It’s about the clothes, but it’s not really about the clothes. It’s about what the clothes do to you as an actor and as a person.”