If Giorgio Armani wasn’t exhausted by the end of his weeklong trip to New York, his frequent date, Eugenia Silva, could barely pick herself off the floor.

“Just one more event tonight,” Silva sighed at a lunch... 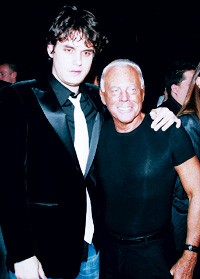 If Giorgio Armani wasn’t exhausted by the end of his weeklong trip to New York, his frequent date, Eugenia Silva, could barely pick herself off the floor.

“Just one more event tonight,” Silva sighed at a lunch at the Giorgio Armani boutique Thursday, referring to the Fashion Group International Awards that night set to honor the designer. A model in law school, Silva added that she’d have to throw a party once she finishes her exams “so people actually believe I’m a lawyer.” As one of Armani’s fashion ambassadors, she was accompanying the designer to a series of events, starting with Tuesday evening’s fashion show.

Kim Cattrall, Glenn Close, Wyclef Jean, Kerry Washington, John Mayer and Radha Mitchell were just some of the celebrities — all, of course, dressed by Armani — who sat front-row at Pier 59 to take in a replay of the spring collection the designer showed in Milan. As if it weren’t enough to watch ringside, Ricky Martin took to strutting his stuff on the runway. Most of the boldfacers stuck around for an A|X party, where Armani ran around the cavernous space greeting friends. Photographers made a serpentine trail behind him, snapping each photo op whenever the designer embraced another celebrity guest.

Mayer said it was his first fashion show. “I wasn’t scared at all,” he explained. When asked what he might find scary about the proceedings he said, “I don’t know, it’s foreign.”

Vin Diesel was just upset that he has trouble finding outfits to fit his wide and bulky frame. “Who the hell do I talk to about that?” he blurted. “I’m going to find Giorgio right now and tell him to hook me up.” In his new movie, “Find Me Guilty,” Diesel plays a mobster who spends most of the film in jail. “I don’t get to wear nice clothes in prison,” he said. “But in court I do.”

This story first appeared in the October 29, 2004 issue of WWD. Subscribe Today.

As for Charlie Hunnam, the star of “Nicholas Nickleby” who will one day, he hopes, star in an Armani ad campaign, he smiled wistfully at the thought of the fake Armani sweater he had growing up. “Now I’m hobnobbing with the man.”

“I’ve always loved cinema,” Armani said. “There are so many movies I love, it’s impossible to decide [which is my favorite]. I could say ‘Notorious,’ but I could also say ‘Blade Runner.’”

The glamorous affair had Gretchen Mol reminiscing about the first time she wore Armani, which happened to be at the 1998 Vanity Fair Oscar party. “It was a pale green beaded gown,” she recalled. “I didn’t keep it — you can’t really wear something like that again.”

As for Neeson, Armani started to dress him after “Schindler’s List” was released. “There’s a beautiful dusty gray double-breasted suit that I still have in my closet,” he said. “I touch it reverentially at least once a week.”

The next afternoon at the boutique, Alex Kramer, Zani Gugelmann, Emilia Fanjul Pfeifler, Marielle Safra, Olivia Chantecaille and Serena Boardman queued up to have their photo taken with the designer as if he was Santa Claus — although some of the Ladies Who Lunch complained about the small finger sandwiches. “I coudn’t say I wanted 10 sandwiches because the people in front of me were only asking for one,” remarked one socialite.

Still, Armani — who finished the day with a book signing at Bergdorf Goodman — was the center of attention.

He had equally kind words to say about Lembo and her friends. “In Milan, there is snobbery,” said Armani. “The women in New York smile more easily.”