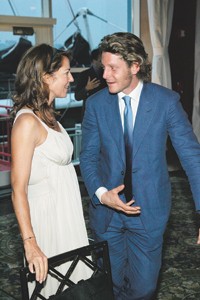 NEW YORK — Any time the Europeans come to town is likely to be a grand occasion, and LVMH’s Bernard Arnault and Sidney Toledano of Dior didn’t disappoint Tuesday night with a sumptuous dinner at The Four Seasons following the fashion house’s cruise show. The Pool Room was transformed into a romantic, candlelit setting, replete with white linens, Lucite chairs and white peonies. “This is a perfect place for a wedding,” said Fabiola Beracasa. “But a small one.” Arnault and his wife, Hélène, daughter Delphine and Toledano played host to 150 guests with a menu that included opulent dishes such as mounds of Sevruga caviar over a baked potato, poached lobster with black truffles and a hazelnut souffle, and a slew of special wines of Arnault’s very own choosing — Dom Pérignon 1998, Château Cheval Blanc 1999 and a Château d’ Yquem 1985. While guests such as Spike Lee, Lisa Airan, Hope Atherton, Marina Rust, Marisa Berenson, Harvey Weinstein and Georgina Chapman sipped and supped, John Galliano happily held court before heading off with pals to Bungalow 8.

On Monday night, there was a banquet of an altogether different sort. Real estate mogul Aby Rosen gathered 240 of his nearest and dearest for his birthday at Chinatown Brasserie, including his wife, Samantha Boardman, Lee Radziwill, Ron Perelman, Calvin Klein, Ross Bleckner, Aerin Lauder, Michael Kors and Carolina Herrera. Even Aby’s older sons, Charlie and Gaby, were on hand for the lively fete, making small talk with the towering costumed stilt-walkers. Charlie asked the man if he was on stilts. “No, they’re my real legs,” replied the street performer. “I’m not three, man,” was the wee Rosen’s indignant response. Indeed, Charlie is nine years old and his dad was turning 46. Of the big day, and fresh from the birth of his newborn son, Alexander, Rosen was positively beaming. “What can I say, it’s been a great year,” offered the birthday boy.

This story first appeared in the May 18, 2006 issue of WWD. Subscribe Today.

Across town, shutterbugs, both professional and amateur, celebrated the International Center of Photography’s 22nd annual Infinity Awards at Pier 60. Kelly Klein and Lapo Elkann were in deep conversation, while M.A.C.’s John Demsey shot a pic of Amy Sacco before she buzzed over to say hello to Mischa Barton. Justin Chambers of “Grey’s Anatomy” missed dinner altogether, but was relieved to hear he was in time for the awards show honoring his friend Steven Meisel, who took the prize for Applied Photography. The actor was in hog heaven despite Meisel’s absence and was chatting it up with pal Mario Sorrenti, whom he’d modeled with as a teen. “You don’t get much cooler than that,” he said of Sorrenti.