On Friday night, while the rain poured down in Manhattan, a young moneyed crowd showed up in support of another dangerously drenched city, Venice, at the... 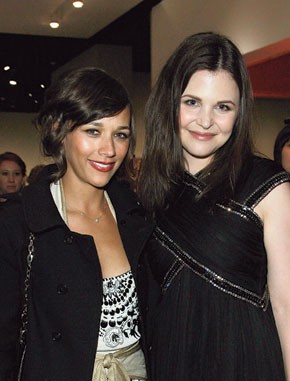 On Friday night, while the rain poured down in Manhattan, a young moneyed crowd showed up in support of another dangerously drenched city, Venice, at the Save Venice Ball at the Metropolitan Club. With a string of benefits coming up for the junior social set — Museum of the City of New York, the Frick and the American Museum of Natural History, to name a few — party page regulars were a little scarcer than in years past. But chairs Adelina Wong Ettelson, Olivia Chantecaille and Holly Dunlap were in good cheer, sipping Dom Perignon and donning iridescent gowns and masks. “It’s really a thong,” Dunlap joked of her mask, which consisted of a swatch of black lace.

The previous night, Bally and its creative director, Brian Atwood, hosted a pre-event cocktail for New Yorkers for Children, where Marisa Noel Brown, Dayssi Olarte de Kanavos and Bebe Neuwirth perused the goods while Joy Bryant, sporting a new do, was only making a brief stop in New York before heading back to L.A. to work on her first full-blown producing gig.

That same night in London, a gaggle of Guinnesses got together to celebrate Patrick Guinness’ new book “Arthur’s Round” about the famous brewery founder Arthur Guinness. Daisy de Villeneuve, Jasmine Guinness and Nicky Haslam sipped on mini pints of beer, but Jade Parfitt abstained. “It makes me so sleepy,” she said.

Across town, Tod’s hosted the Whitechapel’s annual Art Plus Film party across town. Margo Stilley was crazy over the Fender Stratocaster on display from artist Christian Marclay’s 2008 film “Solo.” It, along with a patent leather Tod’s D-bag designed by Scottish artist Jim Lambie and Anish Kapoor’s gouache “On the Horizon” were one of many artsy lots up for grabs.

On Wednesday, Allegra Hicks and Lillian von Stauffenberg hosted a charity auction and lunch at Asprey’s Bond Street in aid of cancer charity CLIC Sargent. But the attraction wasn’t the food or the glitzy gems; it was the shiny silver cutlery. “Is this the goodie bag?” asked Elizabeth Saltzman, lifting up her weighty knife and fork.

Meanwhile, Ginnifer Goodwin and Ali Larter attended LACMA’s One-Night Only event, hosted by W, and the Whitney Museum had a weeklong celebration for the opening of its 2008 Biennial. At the Whitney’s Tuesday night reception, Marilyn Minter, Rirkrit Tiravanija and Fritz Haeg (whose “Animal Estates” installation graced the front entrance) greeted friends, while Mary Boone, Stefania Bortolami and seemingly every gallery assistant in town made the rounds. Henry and Marie-Josée Kravis gamely tried to plow through the crowds and actually see the art, though others, like Coco Kopelman, walked in, took a look at the lobby and walked out. Meanwhile, model Chanel Iman (wearing a Barbara Kruger T-shirt from the Gap collaboration with Yvonne Force Villareal’s Art Production Fund) was having an immersion course in contemporary art. “I didn’t think I would like art,” she said. “I see some pieces I would buy for my mansion, when I get one.”

Thursday night, Graff chief Henri Barguirdjian co-hosted a dinner at the Park Avenue Armory, which this year is an outpost of the Graff and NetJets-sponsored Biennial. Leonard Lauder, Adam Lindemann and Amalia Dayan mingled in a room filled with ropes of blonde hair braided and tied with red bows — actually an installation by Oregon artist MK Guth. While guests slipped upstairs to check out more installations or admired the three models dripping in diamonds, co-chair Liz Swig was on a mission: “I’m going to bring back tequila,” she announced, as she had waiters bring rounds of shots for her guests.