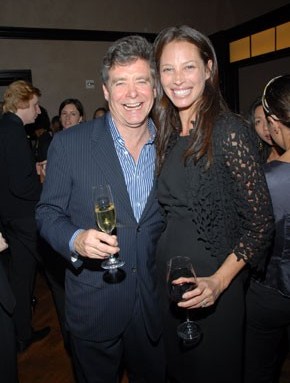 Christy Turlington may have just gotten back from a yoga retreat at Parrot Cay with husband Ed Burns and their kids, but all that stretching didn’t prepare her for the onslaught of reporters before the dinner that Chanel hosted to celebrate the artist program of New York’s Tribeca Film Festival.

“I feel like I’m at a junket,” said the supermodel, laughing, surveying a room that was packed with scribes and photographers. “But I’m just happy that I didn’t have to go uptown.” Other guests, like Natasha Richardson, sought refuge in the lobby, or opted for the patio, like Mary-Kate Olsen, who slipped out and started drinking Amstel Light.

Meanwhile, Mamie Gummer came to support dad Don Gummer, one of the artists tapped for this year’s program, which supplies the prizes for the film festival.

“We came in the family Volvo,” she said. “We live just around the corner.”

The actress, whose mother is Meryl Streep, is currently making her Broadway debut in the Roundabout Theater’s production of “Les Liaison Dangereuses,” which opens Thursday night. “I don’t have that big of a part,” she demurred. “There’s a lot of downtime, so I go on Facebook and Google.”

Over the four-course dinner, model Liya Kebede chatted with Brice Marden, who in turn hit up her hedge fund honcho husband for financial wisdom.

As for “Gossip Girl” Blake Lively, she was living out the part of the budding starlet to a T: She arrived late with onscreen boyfriend (and rumored offscreen squeeze) Penn Badgley, and left through Ago’s side door, paparazzi in hot pursuit.