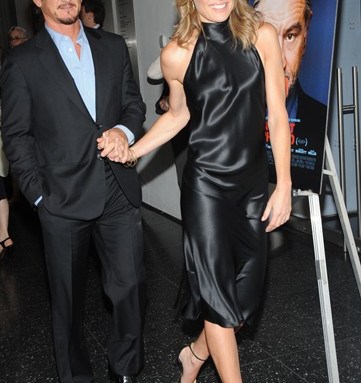 A crowd of curious movie fans and Hollywood insiders including Barbara Walters, Steve Buscemi, Nora Ephron and Julie Taymor gathered at the Museum of Modern Art on Wednesday night for a screening of “What Just Happened?”, a gimlet-eyed examination of Tinseltown based on the book of the same name by producer Art Linson. Also on hand were stars Robert De Niro, who appears as Ben, the Linson-esque character; Robin Wright Penn, who plays his second ex-wife, and Sean Penn, who munches scenery as an outsize version of himself.

Linson is known for much-lauded films like “Fast Times at Ridgemont High,” “Dick Tracy,” and “Fight Club,” but his version of his life hardly makes for a sentimental, feel-good flick.

“That was painful to watch,” said actor Emile Hirsch of the many cringe-worthy, laugh-inducing moments endured by De Niro as the beleaguered producer. Also sacrificing their pride are John Turturro as a stressed-out agent with stomach problems and Catherine Keener as a studio head who will even take calls in the bathroom.

It was enough to convince Lily Rabe, who appears as a development girl, that LA is a tough town. “Working in Hollywood is far scarier than being an actor,” she said.

And while director Barry Levinson swore at the packed after-party at 21 that the movie was neither a spoof nor a satire, it certainly mocked actors’ big egos. Co-star Bruce Willis happily made fun of himself, throwing tantrums as well as piling on pounds and a grizzled beard (his character is based on Linson’s real-life experiences with Alec Baldwin while making 1997’s “The Edge”).

But even though they demonstrated a healthy sense of humor on-screen, neither De Niro, Penn nor his wife would talk to press at their own premiere, instead carefully avoiding all journalists.