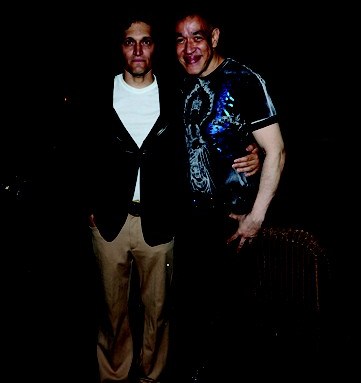 Even at a civilized dinner party, bad boy artist Andres Serrano doesn’t fail to shock. “I never thought I would work with s—,” he deadpanned over his appetizer as he sat next to his gallerist, Yvon Lambert, at a fete in his honor at the Bowery Hotel Thursday night.

But for his latest show at Lambert’s Chelsea gallery, such scatological subject matter is exactly what Serrano focused on: the end product, if you will, of 66 different animals, including himself. The resulting large scale images have names like “Good S—,” “Bad S—,” and “Holy S—.”

“It first occurred to me when I was watching the nude wrestling scene in ‘Borat’,” explained the photographer, who is infamous for the 1987 work “Piss Christ,” that sent the late Jesse Helms into apoplexies of rage.

Given that controversy, it’s slightly incongruous that one of Serrano’s close friends at the dinner was Vincent Gallo—a self-proclaimed hard-core Republican.

“John McCain invited me to go to the convention, but I couldn’t attend since I had to work,” said Gallo, who will instead be hitting the fashion shows of Marc Jacobs, Anna Sui and Rodarte while he’s in New York. “I love [Sarah] Palin,” he continued. “I think she’s hot.”