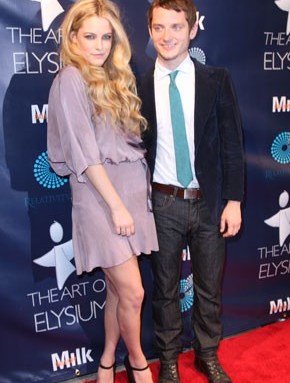 Elijah Wood and Riley Keough encouraged the likes of Joshua Jackson, Agyness Deyn and May Anderson to furnish their walls in the name of charity on Tuesday night when the duo co-hosted a reception for The Art of Elysium at Chelsea’s Milk Studios in New York. On sale at the benefit were works from “Rebel Rebel,” a series of Warhol-esque silk screens by Mick Rock and Russell Young that featured rockers like Iggy Pop, Lou Reed and David Bowie.

“It definitely takes balls to put one of these up in your house,” declared Wood, an art collecting newbie himself (“It’s intimidating and it’s expensive,” he said).

The actor’s co-host seemed up for the challenge, however.”This would go in my room,” said Keough of a shocking pink David Bowie portrait. “My room has a lot of random s—- in it.”