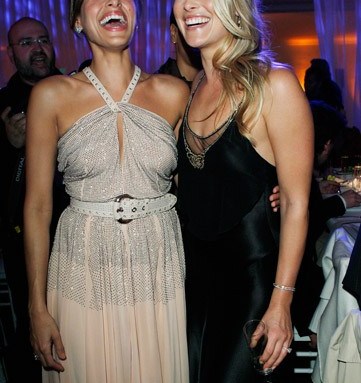 Although the Art of Elysium’s second annual black tie gala was held at St. Vibiana cathedral, the evening’s theme included both heaven and hell. Director Jim Sheridan, who was honored with the Visionary award, helped design the soiree which was sponsored by Vogue and Cartier. Amy Smart and Milla Jovovich, who were both wearing gowns from previous seasons, revealed that their recession strategy has been to shop their closets. “My daughter’s going to get some great hand-me-downs,” said Jovovich.

During a brief fashion show, models traipsed down the catwalk—designed by Sheridan to look ethereal — as two members of the Los Angeles Opera sang a capella. Later, rapper Talib Kweli did a duet with soprano Ronnita Miller to George Bizet’s “Carmen.” Guests including evening honoree Eva Mendes, Kirsten Dunst, Brittany Snow, Nicole Richie, Elijah Wood and Aaron Eckhart danced around in their seats. Kate Bosworth, however, found herself a slave to her gown, thanks to people stepping on her very long train. “It was bound to happen. I didn’t think about that when I picked this dress,” she said.

At the end of the affair, co-chairs Rosetta Millington Getty and Relativity Media chairman Ryan Kavanaugh beseeched the well-heeled crowd to “go to hell,” by crossing the street to Edison, a subterranean nightclub done up to resemble the Underworld, where there was one heavenly concession: a midnight performance by Daniel Lanois.