Ralph Lauren's flagship was the site Tuesday night of a fund-raiser for the National Society for the Prevention of Cruelty to Children. 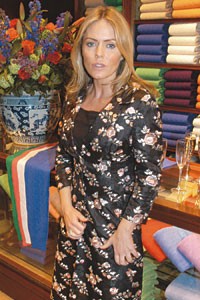 LONDON — “Come on everybody, buy some dresses,” urged Charles Finch, who, with Tracey Emin and Elizabeth Saltzman, took over Ralph Lauren’s flagship here Tuesday night to raise money for the National Society for the Prevention of Cruelty to Children. Twenty percent of the money spent by the likes of Elle Macpherson, Petrina Khashoggi, Rena Sindi, Patsy Kensit, Jefferson Hack, Camilla Rutherford, Trinny Woodall and Karen Groos were destined for a new child abuse e-mail hot line, and Emin was more than ready to spend her cash. “I’m going downstairs now to buy some bed linen — we all know why,” said the artist, famous for her Turner Prize-nominated work titled “My Bed.”

The following evening, Sarah Ferguson and her daughter, Princess Eugenie, Thandie Newton, Francesca Versace, Helena Christensen and Erin O’Connor hit up Selfridges to celebrate Marchesa’s debut in the U.K. “Those girls are a buyers’ dream. Girly clothes and good prices,” gushed Alannah Weston, referring to designers Keren Craig and Georgina Chapman, who was there with Harvey Weinstein.