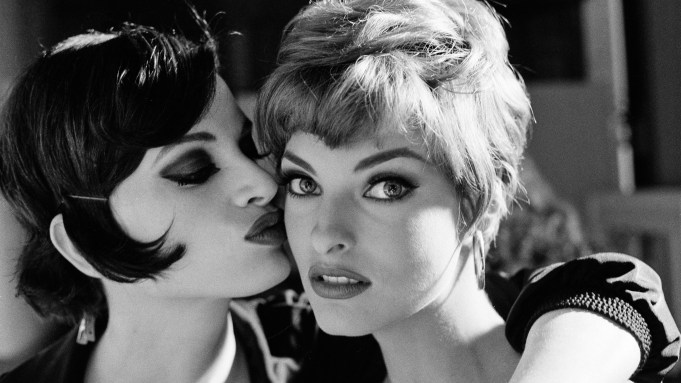 Still at it after 60 years, Arthur Elgort has had an industrious week, picking up a doctorate at his alma mater Hunter College, recapping his career at a “Fashion Icons” talk at 92Y and gearing up for the release of his new book “Jazz.”

One of the walls in his cavernous SoHo studio has a crossword puzzle-like montage of his innumerable subjects: Kate Moss, Karlie Kloss, Christy Turlington, Naomi Campbell, Valentino, Cindy Crawford, Anwar Sadat, Brooke Shields, and Karl Lagerfeld among them. For a New Yorker through and through, Elgort is remarkably plain-spoken about his vast portfolio.

Originally a photographer for Mademoiselle back in the magazine’s Deborah Turbeville and Sylvia Plath days, Elgort’s tenure there halted after Condé Nast Alexander Liberman rang him up to tell him, “’You’ve got to not do too well because you’re beating Vogue,’” Elgort recalls telling him. “‘I have a better idea. Why don’t you make me a Vogue photographer?’”

The 35-year union that ensued led to intercontinental shoots including shooting Nancy Kissinger in China in the Seventies — new territory for any American publication. Self-reflection is not his thing. All Elgort really wants is to frame another shot. “I love work. I’m a real photographer,” he says, shoulders shrugging in resignation. “That’s what I do. In fact, I spend most of my time doing photography. Even sometimes when I have nobody to shoot, I do myself. I get dressed up and put my camera on a tripod, and go like this [offering a slight profile.] So I’m really a photographer. That’s all.”

In 1971, Elgort helped redefine fashion photography with his snapshot-like approach. The smartphone-fueled democratization of photography hasn’t diluted appreciation for the medium. “Exceptional photographers are still exceptional but now everybody can do it. Now if you have an iPhone, you can take pictures. You can take celebrities and they come out very good,” he says. “I’m lucky to still do it because now it would be harder. Everybody has a camera now.”

His assignments pulled him to Japan, China and often out West in the U.S., but Australia and New Zealand were too far. “Now they don’t give you a week anymore. They give you two days. Magazines like Vogue don’t have the money anymore, or they say they don’t. Maybe they do,” Elgort says. “I was an editorial photographer so that means right away no money. You did it for fun. The money was better than a waiter’s, but it wasn’t much. But I enjoyed what I did. That’s the most important thing. I taught my kids that. If you don’t like it, get another job. Don’t be an office guy and say, ‘I can’t wait for my vacation.’ I enjoy every day.”

Married to Grethe Barrett Holby, their daughter Sophie is a photographer, as is their son Warren, who doubles as a filmmaker. Their other son Ansel is on the other side of the camera, as an on-the-ascent actor who will appear in Stephen Spielberg’s next flick “West Side Story.” Recognizing talent early on is a strong suit for their father, who fast-tracked Christy Turlington and Karlie Kloss’ careers. “Kate Moss was an amazing model. You couldn’t take a bad picture of her, if you tried. It was her brains,” he says, motioning toward a museum-size print of a makeup-free Moss, leaning beside an elephant in India. “She had a way about her.”

Within seconds of meeting a model, Elgort knows whether they will work together again. Mining golden models is one of his strong suits. “I’ve known Christy Turlington since she was 15. I didn’t discover her but I put her in Vogue right away. She never had to wait. Ford sent her to me and I said, ‘This girl is going to be the biggest girl you have,’ and they looked at me like I was crazy. They said, ‘We have many good girls, who are better than Christy Turlington.’ I said, ’That’s very nice.’ And I don’t remember the names of the good girls.”

While the 5’6” former dancer Dayle Haddon remains his favorite, Elgort said, “There is a new girl who could maybe gain a pound or two. Cindy Crawford’s daughter Kaia. She is very pretty and smart. I would take her anytime…I did Cindy Crawford’s first job in New York. It was when she was big in Chicago and she was afraid to come here. They told her if she went to New York, she would be finished. I said, ‘I think New York has better photographers.’ She worked with Penn, Avedon and me.”

Aside from Steven Meisel, “the best photographer now,” Elgort was hard-pressed to name younger ones. Further back Irving Penn, Richard Avedon, Bruce Davidson, Henri Cartier-Bresson and Cecil Beaton are favorites. The “very quiet, but very concentrated” Penn first and foremost loved his wife Lisa Fonssagrives. “That was his prize,” Elgort said. “Penn didn’t like to be photographed. I used to get him because Phyllis [Posnick formerly of Vogue] would say, ‘Get it now.’ Penn would say, ‘You’re bad. You shouldn’t have done that. I wasn’t ready.’ I would say, ‘That’s why it’s good.’”

He also liked Avedon, who he knew, but not well. “He liked to talk about himself. He loved himself. He did great pictures especially the early stuff with Suzy Parker and Mike Nichols,” Elgort says. After switching from dance photography to fashion, Elgort learned the ropes from Gösta “Gus” Peterson. “He taught me not to worry, which I never did anyway. And enjoy yourself, go to lunch and have herring as much as you can. Also what was good about Gus Peterson was he was very natty. He dressed beautifully,” Elgort says. “He would always say, ‘That was pretty good. You can do better.’ When he went to one of my shows at Staley-Wise, he said, ‘You’re really getting good. Do I have anything to do about it?’ I said, ‘Of course, without you…’”

Regarding the numerous allegations of sexual mistreatment waged against several well-known photographers, Elgort was even-keeled. “I think a lot of them are phony. Maybe some of them are real. I’m not with them so I don’t know. But there are a lot of allegations now,” he says. “Mario Testino is a good photographer. He had some problems too and isn’t working for Vogue anymore. He’s the nicest guy you could meet. Do I know his habits or what he likes? No.”

Elgort continues, “My son is a movie star and he worked with that very famous actor Kevin Spacey who got into trouble. My son worked with him a lot and they didn’t have sex. First of all, Ansel is very strong and he would have punched him in the nose and that would be that,” Elgort says. “He was a very nice guy, but if there were women around, he wouldn’t talk to them. Maybe he was fooling around. We don’t know.”

Off the clock, Elgort says he “takes pictures, mainly, and drinks wine — very good wine. I like movies but I don’t like to go to movie houses and sit there with people I don’t know. It’s boring, that’s all. But I’ll go to my son’s movies because I have to. And I like to see what he does. I’ve seen a few movies where he was very good, I was surprised. Now he’s doing ‘West Side Story’ with Steven Spielberg, who is a good director. It’s not a junky job.”

Alluding to the reported disconnect between Anna Wintour and Donald Trump, Elgort suggests putting the first lady on the cover of Vogue was “a good idea because it would sell.” Shortly after Melania Trump married Donald Trump, Elgort went to Mar-a-Lago. “She is a very nice woman, very nice. I must say she was so polite and on time. She couldn’t have been nicer. But she married this guy named Donald Trump who is an idiot, I think,” Elgort says.

In the Eighties, he shot Leonard Bernstein’s passport photo at the famed conductor’s request. In Houston for a performance of “A Quiet Place,” Bernstein mentioned to Elgort’s choreographer wife Grethe that he heard her beloved was a photographer, and a pretty good one. Not a fan of passport offices, he asked the couple to make a house call in his hotel room. “We had to wake him up. He liked to stay up until 5 in the morning just drinking and talking with five or so friends, talking about the next things they were going to do,” Elgort says. “I loved Leonard Bernstein, because I used to be an usher at Carnegie Hall years ago.”

Another chance encounter was with Louis Armstrong. “He is still the best trumpet player. I met him once. But I was 10 years old and I didn’t have a camera,” Elgort says. “It was at Basin Street East, a jazz place. My father would take me there.”

During a trip on the S.S. Norway, Elgort photographed many of the jazz players featured in his new book with a Wynton Marsalis foreword. The Art Tatum-trained jazz pianist Dorothy Donegan and Dizzy Gillespie (“wonderful, funny and would light up if you had a model”) are among the subjects. A lifelong jazz enthusiast, the crossing was a dream assignment. “That was the perfect job for me, because they couldn’t go anywhere. We knew their room numbers. We’d talk to them, ask to take their pictures and before we knew it, we’d be friends forever.”

The “Jazz” author will be signing books at the Marc Jacobs-owned Bookmarc on Oct. 18. “What’s good about Bookmarc is they give you a free glass of Champagne and you don’t even have to buy the book. They don’t care,” Elgort says.