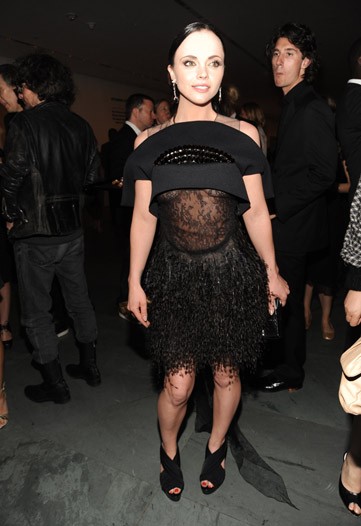 Early June is typically a string of obligatory event stops before the promise of a few weeks of summer freedom. Tuesday night, Givenchy breathed new life into these normally staid days when it hosted a dinner in honor of Marina Abramovic and the closing of her Museum of Modern Art retrospective “The Artist is Present.”

A varied mix of celebrities, models, artists and fashion types packed the MoMA’s lobby to congratulate Abramovic, who had just completed a performance work the previous day that had her sitting in a chair for a total of 700 hours over the course of three months, staring wordlessly at a rotating cast of participants. If the artist was feeling any, say, exhaustion she wasn’t showing it as she was greeted by everyone from Agnes Gund to Patti Smith.

“It was very difficult for me to fall asleep because my brain was going like millions of hours, just so much impressions and felt such incredible love reaction from the audience it was so moving. And this morning we had many things to do and now I’m here and everything looks unreal to me. But this is the biggest moment of my life,” said Abramovic who chalked up her energy to heredity. “You know my mother and father are both national heroes. I think it comes from genetics.”

Riccardo Tisci, who met Abramovic three and a half years ago through her ex-husband, was one of the last people to sit across from her.

“She was crying and it really made me cry as well,” said the designer who is rumored to be working with Abramovic and Robert Wilson on an upcoming opera. He is not accustomed to sitting still for so long. “It was very tough, I did it for a friend. I did it because she needed the heat to go.”

Reactions to Abramovic’s work among the evening’s celebrity contingent ran the gamut from the profound to the perplexed. Liv Tyler, who accompanied Tisci the previous day, seemed still moved by her experience.

“I was just really touched by how in the world everything’s so busy and everyone’s going and going and so many things are thrust at us and the power of something so simple as letting someone see you and really seeing someone and being seen by them, I thought that was really beautiful,” she said.

Christina Ricci didn’t catch the show, but offered her take on Abramovic’s message.

“It’s a really interesting statement on the human soul,” she said, adding, “If I have a television on in front of me, I can sit still for a pretty long time. I mean I don’t know about that though.”

During cocktails, Courtney Love and Veronica Webb had a tete a tete, Serbian singer Svetlana Spajic milled around in traditional dress (she sang during dinner) and Abramovic introduced Tisci to her Indian Lama friend of twenty of years.

“This is Riccardo Tisci. He’s Italian. He designs clothes,” she explained to the monk who was taking in the scene between sips of white wine.

The appearance of clothing-averse performance artist Kembra Mahler brought many to a grinding, gawking halt. “Oh my god, is she wearing latex or body paint?” asked an awe-struck Ricci to friend Liz Goldwyn. (The answer was white body paint and not much else.)

Dinner was held in the second floor atrium during which the MoMA’s Glenn Lowry thanked the night’s other hosts, LVMH’s Renaud Dutreil, the Kelly family, Donald R. Mullen Jr. and Willem Peppler and an energetic Klaus Biesenbach gave a rambling speech in which he repeatedly heckled Abramovic.

“Marina doesn’t see anyone without glasses. Marina wear your glasses, please. Can you look at me please, Marina? She’s not listening to me,” he babbled incoherently.

Abramovic received two standing ovations and began her own speech with a moment of silence in honor of the recently passed Louise Bourgeois and Kazuo Ohno.

“The story with Klaus is long and strange I could kill him for his speech alone,” she said, then turning her attention to Risci, “You know when you’re in the 70s and you’re an artist and you wear nail polish and lipstick they don’t take you seriously. You look like you want to sleep with the curator. I love vanity and I love fashion and I don’t have shame to tell it. His work is magical, but he’s good looking, too, that really counts.”

Later, the crowd decamped to the Boom Boom Room where Abramovic danced with friends and Bjork wandered around looking like a lost puppy.