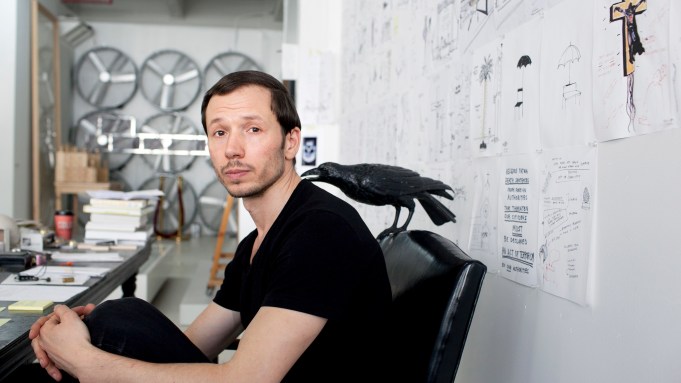 Sebastian Errazuriz is obsessed. During a recent visit to the lithe Chilean artist’s light-filled studio in Industry City (a warehouse complex located by the Gowanus Bay waterfront in the Sunset Park neighborhood of Brooklyn), he was excited to point out and describe the minute details of his quirky and evocative works. His studio was brimming with the vestiges of his artistic explorations — a taxidermy duck with a lightbulb for its head, intricate wooden boxes that cascade open on a curved plane, wrist watches that don’t tell the time, a wall mirror obscured by the handwritten phrase “YOU AGAIN?” The artist’s casual dress of a black t-shirt and jeans was a simple presentation in juxtaposition to his creative whimsy.

“It’s a more existential thing, you don’t do it for money, it’s not for attention,” says Errazuriz, demonstrating the details on a miniature hand-carved version of his wooden “Boat Coffin” sculpture — which was complete with mini custom hinges and a mini propeller that spins — details that he notes add days to his process. “I mean, who’s even noticing? This is a model, and you only really do this sort of stuff if it’s out of passion or love,” he continues. “It’s the kind of stuff you only do if you’re really, really obsessed with it.”

He’s found a partner in the luxury watch brand Audemars Piguet, which commissioned him to design “Second Nature,” their booth in the Collector’s Lounge for the 2017 Art Basel shows which includes a large-scale art piece.

“As an artist, you’re always a bit fearful working for a company,” says Errazuriz. “The fact that [Audemars Piguet] is family-owned, they’re willing to take more risks and don’t have to report to a board all the time, which allows them to have bigger goals,” he continues. “In a way, we connect because we have this weird love for stuff, this obsession with mechanical things and how they pair together.”

His resulting work for the brand incorporates the concept of time, although in an oblique way: He created a wooden tree sculpture. “If everything had to be about watches, we lose maybe the common reasons why they do what they do and we do what we do,” he explains. “The retail market’s having problems right now … people are going back to wanting to have a few things, but of quality. And a few things that have a story that’s either personal, or a story they can connect with. And I think that’s also starting to happen in the art world — this notion of being able to experience beauty or being able to experience things that are more transcendental.”

Errazuriz will debut his sculpture during Art Basel Hong Kong before taking it to Art Basel in Switzerland and Miami Beach later this year. The work will be situated in the center of Audemars Piguet’s Collectors Booth, surrounded by watch displays and adjacent to a smaller room which will screen Chinese artist Cheng Ran’s video short “Circadian Rhythm.” As live trees are wont to do, Errazuriz’s sculpture will “grow” new wooden features for each new season and fair — buds for Basel, flowers for Miami. He modeled his tree after the spruce trees that grow in the Vallée de Joux region of the Jura mountains, which is the birthplace of Audemars Piguet.

“The whole point was to get a tree, topple it over, shave it, turn it into planks, create these blocks that we could carve out,” he explains. “And create a tree from scratch that could almost be at the level of detail of a tree that you would see [in the region].”

The sculpture was carved by robotic arms from a CAD drawing, and then finished by hand to realistically mimic the detailing, texture and all, of a tree, working to a scale of 0.1 millimeter.

If cutting down a tree to then turn the wood into a tree sounds counterintuitive — well, Errazuriz is the first to point out that it is.

“It’s a bit of a crazy process, it’s a little nuts,” he admits. “It’s all this time and engineering for something that doesn’t serve a purpose, really. But, in a way, we’re trying to follow the obsession and craziness you would see if you went to see a watch fabricated by Audemars Piguet. It doesn’t make sense for you to buy a handmade watch,” he continues. “You see a man who’s sole work is all day with a little magnifying [glass], and he’s tweaking two cogs, and that’s what he does all day. There’s something really odd and beautiful about it.”

One could call it going against the grain.