"I'm not a stage person, I've never acted in a play, I don't even go to the theater much," Jonathan Rhys Meyers confided Tuesday night at BAM's Hedda Gabler Benefit, which was sponsored by Gucci. 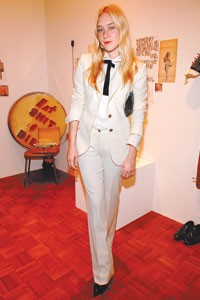 NEW YORK — “I’m not a stage person, I’ve never acted in a play, I don’t even go to the theater much,” Jonathan Rhys Meyers confided Tuesday night at BAM’s Hedda Gabler Benefit, which was sponsored by Gucci. But Rhys Meyers was among the stars and theater buffs who braved the frigid night to see Cate Blanchett and Hugo Weaving (of “Matrix” fame) in the Ibsen play, which was adapted by Blanchett’s husband, Andrew Upton, for the Sydney Theatre Company. Maggie Gyllenhaal and boyfriend Peter Sarsgaard, Mary-Louise Parker, Marisa Tomei, Mark Ruffalo, John Turturro and even Martin Scorsese showed up to catch Blanchett’s turn as the indomitable yet sympathetic Hedda. Fellow Aussie Naomi Watts and beau Liev Schreiber led the standing ovation before trooping a few blocks to the reception on the stage of the BAM Howard Gilman Opera House. Newcomer Aden Young, who plays Blanchett’s love interest, was equally awed by her in real-life. “Sometimes, when Cate does things that are so amazing, you stop and wonder, ‘How did she do that?’ But then I remember that I’m in the middle of a play and I can’t stop,” he admitted before heading off for a much-needed drink. “I play a drunk, after all,” he joked.

Back on the island, Chuck Close and hundreds of other artists, bona fide and wannabe, mobbed the Whitney Museum for the opening of the Biennial show. As the masses sipped Peace wines from Oregon and noshed on caponata, crackers and tortellini on skewers downstairs, Caroline Kennedy Schlossberg quickly slipped in through the street-level entrance and headed straight upstairs where Rachel Feinstein and John Currin, Kim Gordon, Yvonne Force Villareal and Kim Heirston were already perusing the new works.

“The fourth floor is kind of outstanding,” said Tara Subkoff, her hair done up in ringlets. Lola Schnabel stood by the stairwell, reapplying her fire-engine red lipstick and chatting with Elisabeth von Thurn und Taxis, while other guests ducked into a small screening room to check out Francesco Vezzoli‘s “Trailer for a Remake of Gore Vidal’s ‘Caligula'” (starring Helen Mirren, Milla Jovovich, Benicio Del Toro and a deliciously maniacal Courtney Love).

Spending time off screen was actress Chloë Sevigny. The laid-back blonde was unusually relaxed, perhaps because she won’t be participating in the Oscar madness out West. “I have no reason to go,” she said. She did, however, have just cause to be at the Whitney. “I have a lot of friends in the show,” she added before plugging her pal Dan Colen, whose sculpture of a bronze boulder plastered with chewing gum sat on the top floor.