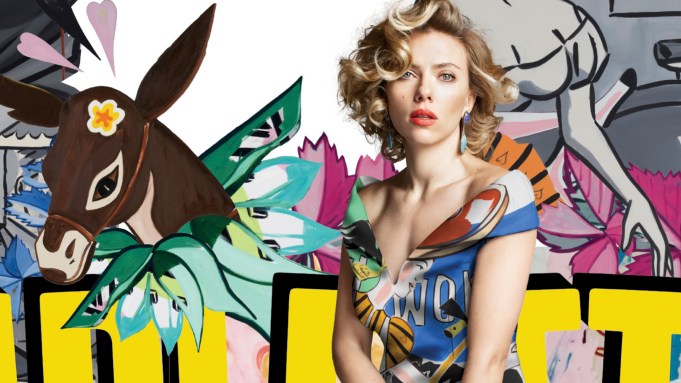 Scarlett Johansson’s famous film character, the badass weapon-toting Natasha Romanoff from “Avenger’s Endgame,” couldn’t be father away — sartorially speaking — from her new collaboration with As If magazine, artist David Salle and designer Peter Hidalgo. In a photo shoot that Salle art directed and As If editor in chief Tatijana Shoan photographed, Johansson wears a trio of limited-edition dresses with screen siren silhouettes that brought out the actress’ flirtatious side.

As If aims to facilitate cross-disciplinary creativity between the designers, actors and artists that are its subjects. The latest installment in its collaborative series, proves that art, fashion and entertainment can make the coziest of bedfellows.

Johansson appears on three cover versions of As If volume 15 wearing one of the dress styles designed in-house with Hidalgo and with paintings from Salle’s recent show at London’s Skarstedt Gallery, “Musical-ity and Humour,” printed onto the garments. In addition, limited-edition made-to-measure versions of two dress styles will be offered, each numbered and signed by Salle.

The dresses will go on sale in the fall at asifmag.com and select retailers, and can be preordered through the magazine.

When Johansson agreed to be As If’s model, “we knew we had to do something extraordinary to elevate the typical cover girl image into a work of art worthy of one of Hollywood’s most valuable players,” said Shoan. “We knew we had to pair her with an artist.”

“Our first instinct was artist David Salle,” said Scott Fishkind, publisher of As If, and Shoan’s husband. “As it turned out, David is one of Scarlett’s favorite artists, and David was a fan of Scarlett’s work.”

Salle was all too happy to see his art transferred to fabric, since his father owned a fashion boutique when he was a child and he had memories of helping dress the mannequins in the window displays. “David said he had always imagined somehow working with dresses,” Fishkind said. “We decided to created limited-edition dresses that Scarlett would wear for a cover shoot.

“To make sure the dresses were done correctly, we brought in fashion designer Peter Hidalgo because of his attention to detail and craftsmanship,” Fishkind added. “Peter’s one of the best patternmakers and known for his skills in cutting and fitting garments. He’s a master tailor and won in 2010 the Rising Star award from Fashion Group International.”

With energetic and exaggerated cartoon-like images, Salle’s latest work consists of enlarged details of black-and-white renderings of drawings made in the Forties and Fifties. However, the series of paintings isn’t about the cartoons, rather, they borrow from the landscape of familiar tropes the artist calls “cartoon slapstick. That’s just one element, the rest is free jazz.”