She's a partner in the affordable sunglass line Privé Revaux and her first capsule will launch on Monday.

Ashley Benson has a dream — she’d love to collaborate on a fashion line with the Olsen sisters.

In fact, the actress and former model, best known for her role as Hanna Marin in the teen series “Pretty Little Liars,” freely admits to being “obsessed” with Mary-Kate and Ashley.

“I think I’m an Olsen twin,” she said during a visit to WWD. “I try to find out where they are at all times in New York. This is so weird and stalker-ish — I know a few places where they hang out so I go there to see if they’re there — I’ve never had luck yet.

“I’m obsessed with their clothes, their lines, if I could do a collaboration with them — which would never happen — it would be my dream. They are my fashion icons.”

Perhaps she can send them each a pair of her new sunglasses with Privé Revaux. Benson is a partner in the affordable eyewear line — created by David Schottenstein — along with Jamie Foxx and Hailee Steinfeld. Called the Benzo collection, which is her nickname, the lineup launches officially on July 22 and will retail for $39.95, a price point that is considered premium for Privé, whose other models sell for $29.95. 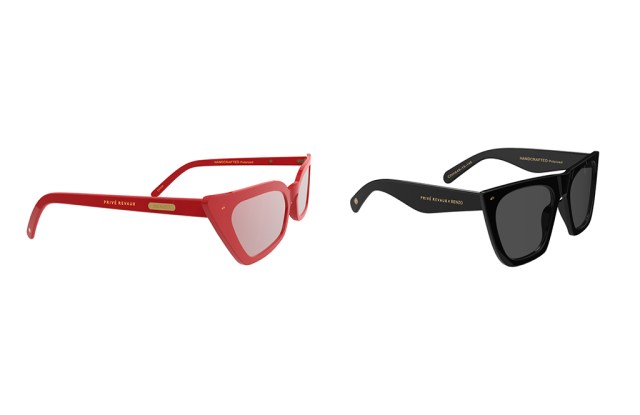 The collection consists of three frame styles: Olive, a narrow, modernized version of a cat-eye that is named after her dog; Planco, a futuristic straight brow design with side shields that is named after her best friend and publicist, and Victoria, Benson’s middle name, which is a classic rectangular style. Each has acetate frames, polarized lenses and anti-blue light optical technology. On the arm of the glasses is the Privé Revaux x Benzo mark.

Benson said this has been her first attempt at design, but hopefully not her last. When Schottenstein asked her what kind of sunglasses she’d like to create, she sent him dozens of screenshots of celebrities such as Rihanna and others sporting shades, and they went from there. 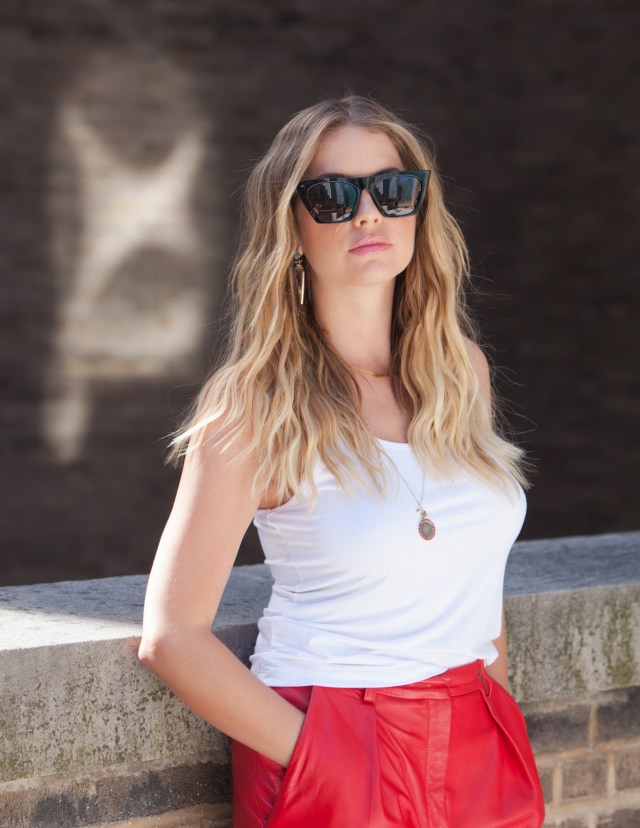 “These are my favorite ones, they’re called the Victoria. Now the smaller frames are in style, but for me, any kind of glasses are great. If you’re not feeling your best, you can look great with a nice pair of glasses on and feel better about yourself.”

Benson said because many of her fans are young, she wanted to make sure that her collection was affordable. “I have fans of all ages, but PLL girls are young and no one wants to spend money on sunglasses. You lose them all the time — I’ve lost every one I’ve ever bought and then you just buy them again and you wind up spending so much money. So the fact that I was able to have something that my fans would love and afford was really important to me and it was fun to be in a collaboration with Jamie Foxx and Hailee Steinfeld.”

Benson, dressed in red leather pants, a white tank top and black Chanel sandals, said when she’s not walking a red carpet, she likes to dress down. “I always go for a casual style. I like to be comfortable. I don’t really like to dress up. You always have to do it for your job, or premieres, but I usually only wear jeans and T-shirts. The fall is my favorite time because I can dress like the Olsens and do oversize coats and accessorize with jewelry.” 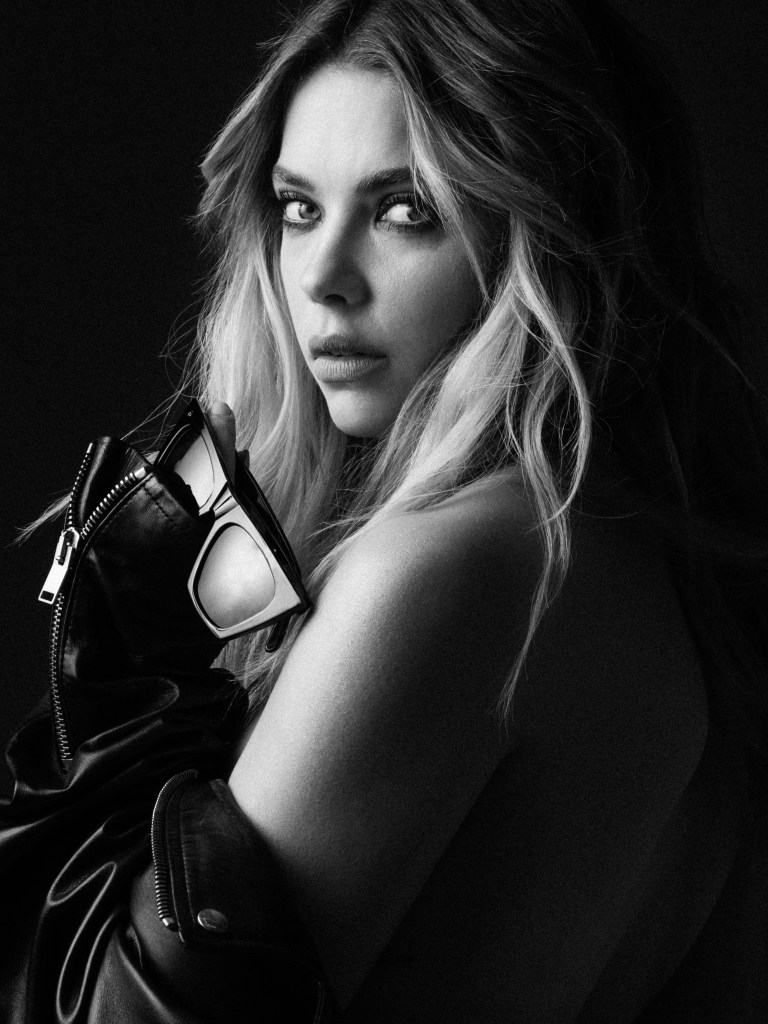 She said she grew up watching the Olsens’ films and when they jumped into fashion, “I just got completely inspired by how they put themselves together, they’re always so relaxed and chic and comfortable and they always look put together. They can have wet hair out of the shower and look amazing. So anytime I get clothes or sunglasses or anything, I try to copy their style, just because I think they’re the most fashionable people out there.”

Benson, whose girlfriend is Cara Delevingne, just completed a film with Frank Langella called “Lapham Rising,” based on the book of the same name, that will be coming out next year. “He’s absolutely incredible and being able to work with him was a big deal for me,” she said. “He taught me so much. When I first met him, he ran up and gave me a hug and said he was happy I was a part of the film. I was scared to meet him because he has every right to be a jerk because he’s Frank Langella, but he was the nicest person and made me feel so comfortable.”

Benson described herself as “a workaholic, but I’m taking my time to work with the right people and not just do a bunch of jobs just to work. I want to really choose projects that challenge me and work with incredible people.”

Although she’ll never say never, her plan is to do more movies and less television. “Televison takes a lot of time. PLL was seven years, before that I was on a TV show for two, and a soap opera for five. Not to say I’d never do a show again, but for right now, I just enjoy having time and being able to travel and pick and choose when I want to work.” 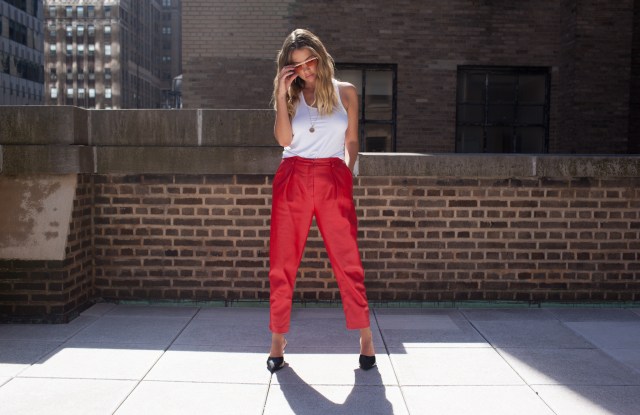 She said she recently started her own production company with her best friend and is working on writing and producing her own projects.

But for the next few weeks, she’s focusing on traveling.

“I have the whole summer off. I’m going to be traveling as much as I can before I work again. I was just in Paris — my friend got married — and [then went] to St. Tropez for a very relaxing week. I never left the hotel. I worked out, ordered room service and just got massages and facials every day. Positano is my favorite place in the world. My girlfriend has never been there and I want to take her for her birthday.” 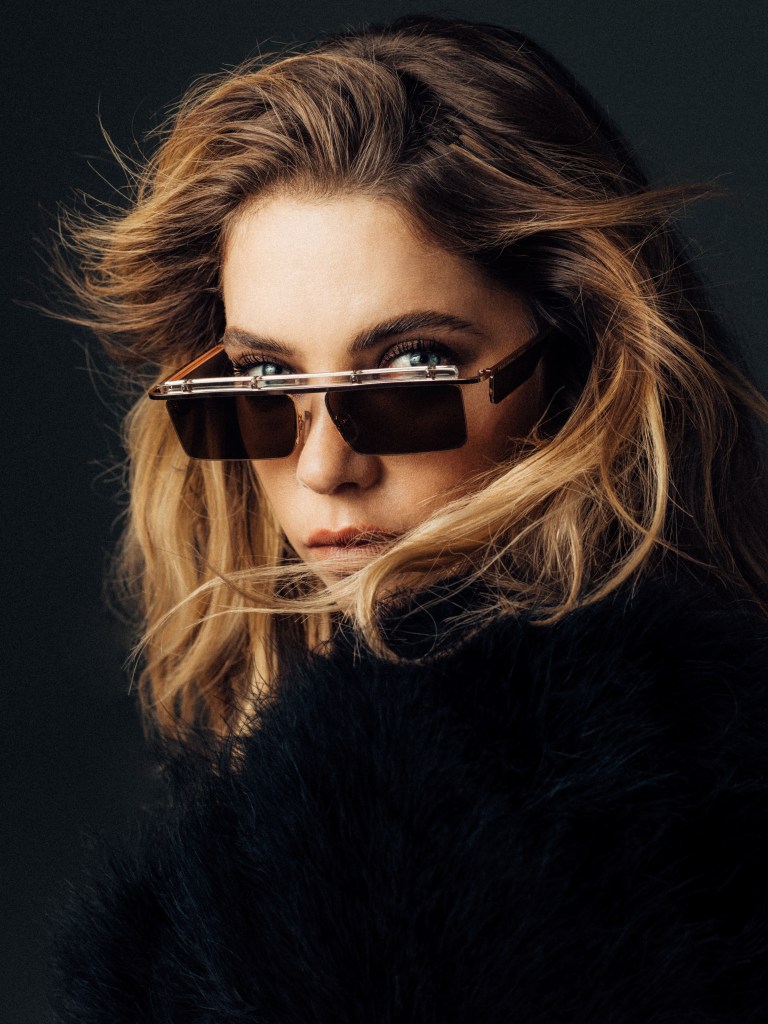 Benson in a campaign image for her capsule collection.  Courtesy Photo

But her current favorite is Amsterdam. “The people are so incredibly nice. I went there and made 15 friends at a random party and I still keep in contact with them. I live in New York and L.A. so to be able to travel and meet normal people and go into their lives and get inspired by them is important to me.”

And she’s also hoping to expand her capsule with Privé Revaux and maybe work with Schottenstein on something else as well. “We’re already looking to do something else together,” she said. “He’s a really good business partner, he’s incredibly intelligent, so we’re seeing what we can work on next.”