“I love poking fun at the traditional ideal of what makes a successful American woman,” said the artist of her first L.A. exhibition.

It’s hard to believe it took this long for pop artist Ashley Longshore — who skewers the glam life in flowery, glittered and bejeweled paintings with slogans such as “You don’t look fat you look crazy” and “Stop taking selfies and get back to f–king work” — to have an exhibition in Los Angeles.

But to hear her tell it like only she can, it took her this long to find the right partner in perfumer and florist-to-the-stars Eric Buterbaugh, who has a love of bon mots himself — check his Instagram — that made them fast friends, and is opening his Beverly Boulevard gallery for Longshore’s first L.A. exhibition, which runs from today to May 24.

“This feels like home,” the New Orleans painter says on a recent morning at the indoor-outdoor gallery, holding forth in ripped jeans, an Elie Saab cape, Celine boots and a Dapper Dan gold necklace worthy of a hip-hop MC. Already a Hollywood and fashion world favorite, she counts Blake Lively, Penélope Cruz and Salma Hayek as fans, has collaborated with Diane von Furstenberg on a powerful women series for her studio, Bergdorf Goodman on home accessories, Judith Leiber on bags and more. 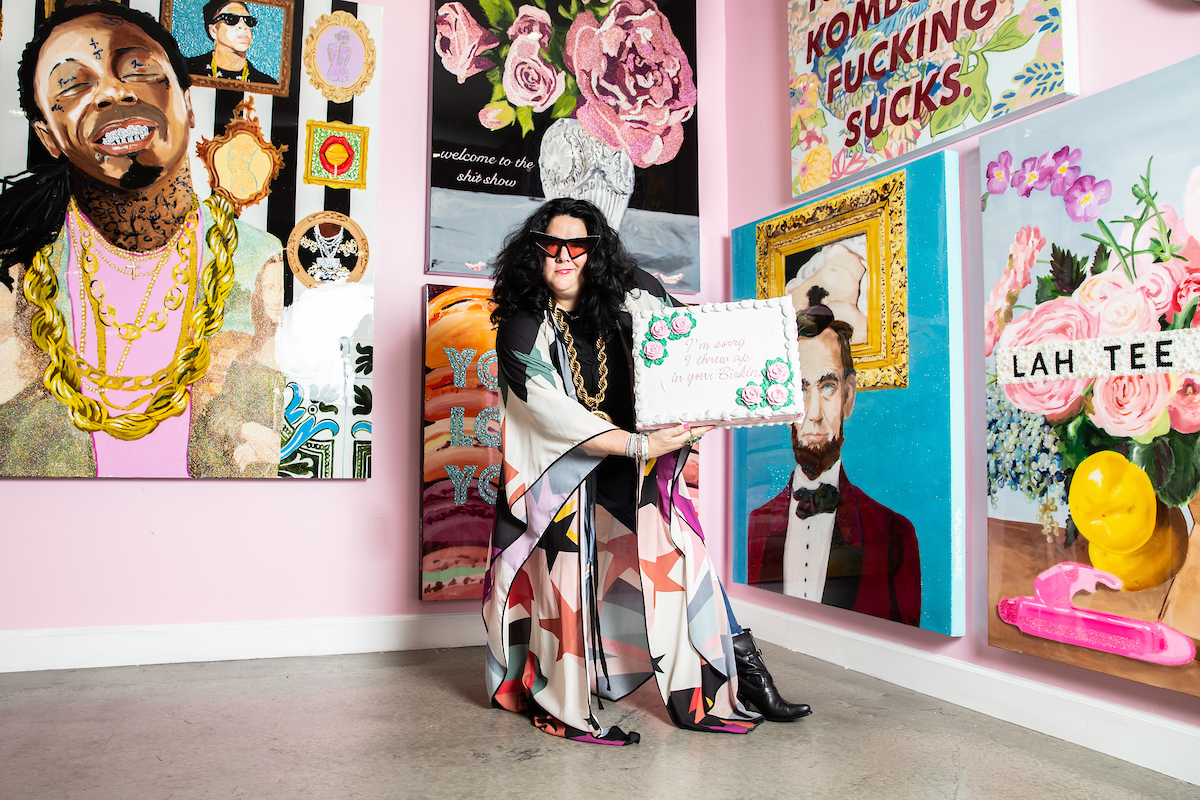 Ashley Longshore’s L.A. show runs through May 24 at the Eric Buterbaugh Gallery.

She created more than two dozen new works for the L.A. show, priced from $7,000 to $46,000. “I thought ‘You don’t look fat, you look crazy’ was perfect for L.A.,” she says of one of the paintings. “Ten years ago I used to go to these lunches with these trophy wives in New Orleans who used to talk about having their husbands snipped, getting liposuction on their pinky toes, and what they’d wear to the Christmas party when it was July. They also used to talk about how they looked fat, and I said, ‘You don’t look fat, you look crazy.’…I just stopped going to lunch. Lunches are for losers. Who said that, Gordon Gekko?”

Another new work reads, “’I do not cook, I do not clean, I do not fly commercial.’ ‘Is there anything more L.A.?’” she laughs. “Eat ice cream, kombucha sucks” is another. “Ain’t nothing wrong with kombucha, but allow yourself to have some damn ice cream,” says Longshore, who insists she is not just knocking Angelenos.

“What I love about Los Angeles is that magic, this is where you feel like you can make all your dreams happen,” she says. “But it’s also about work. Instant gratification gets you pregnant, drunk or high, everything else you’re going to have to work for.”

Longshore’s larger-than-life persona, feminist outlook and deliciously filthy mouth have Hollywood reality TV producers salivating. “It would be a disservice to my collectors to do anything as tacky as that,” she sniffs, while admitting she is taking a few meetings in L.A.. 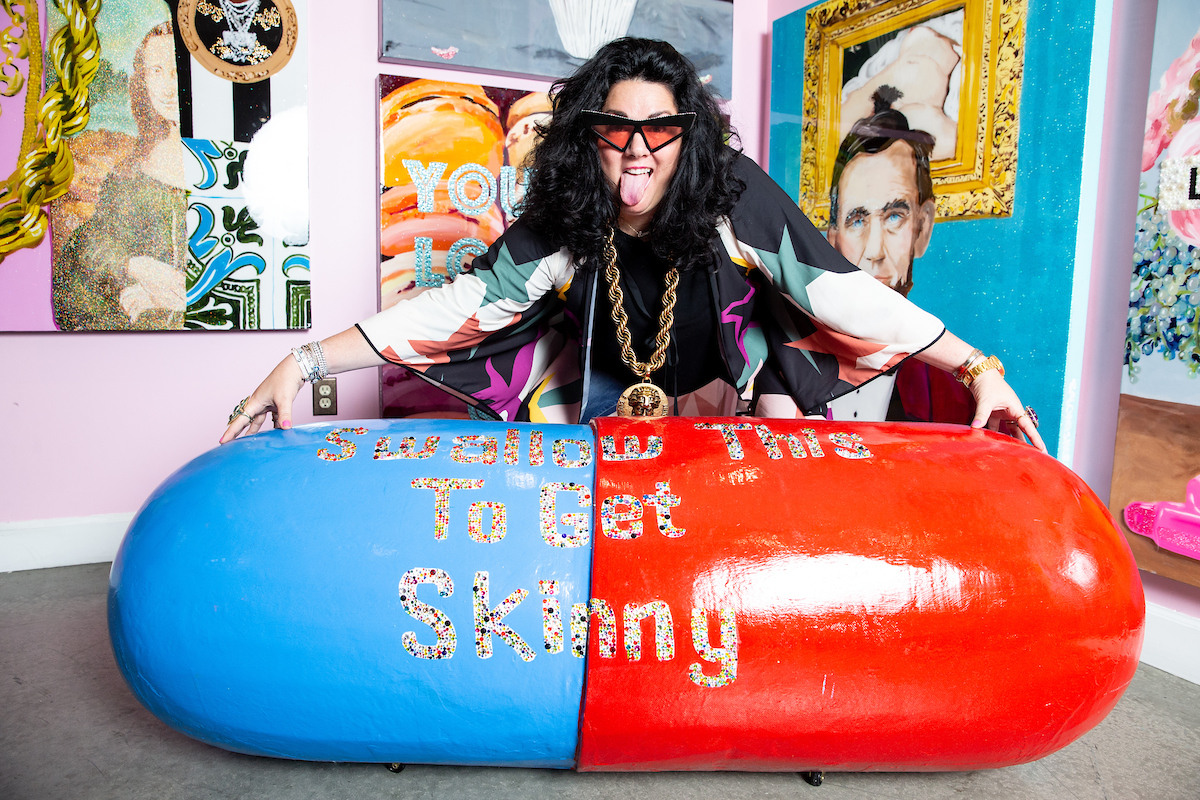 Her colorful personal style often involves some piece of Gucci — she collaborated with the brand on knits — and a Louis Vuitton bag — she’s got a Jeff Koons “Rubens” duffel in tow. “Hell yes, I love fashion, one might say I’m a bit masculine. I don’t wear a lot of skirts or dresses; I love track suits, big hair, capes, accessories, pearls. Fashion is just an extension of who I am. It’s how the world goes ‘damn, she ain’t normal!’”

“We dress her a lot,” says Christian Siriano at her Thursday night opening, adding that they are working on a project together for next season, and that he has his eye on one of her Kate Moss-as-a-nun paintings. “She’s wild, I love her.”

“I realized last night I am camp,” says Longshore, recalling her highlights from the Met Gala red carpet. “Putting myself out there for other people to enjoy the joy is my schtick.”

In L.A., she’s being feted by size-inclusive retailer 11 Honoré. “I’m not a size 2, I will never be a size 2. I can starve myself, I ain’t never going to look like Gisele. This is genetics from my father,” she says, adding, “I love the diversity happening in fashion and business now. It’s about damn time as someone who does a lot in the fashion industry, I’ve got money God damn it, make sure it fits me, too!”

A Southern belle on hell’s wheels, Longshore grew up in Montgomery, Ala. “I had a monogram on my underwear until I started my period!” she quips. “But I love how the fashion world is changing. Women have jobs, their job isn’t shopping all day. They aren’t going to put on pantyhose and four-inch heels, they’re going to wear a track suit and whatever they want.” 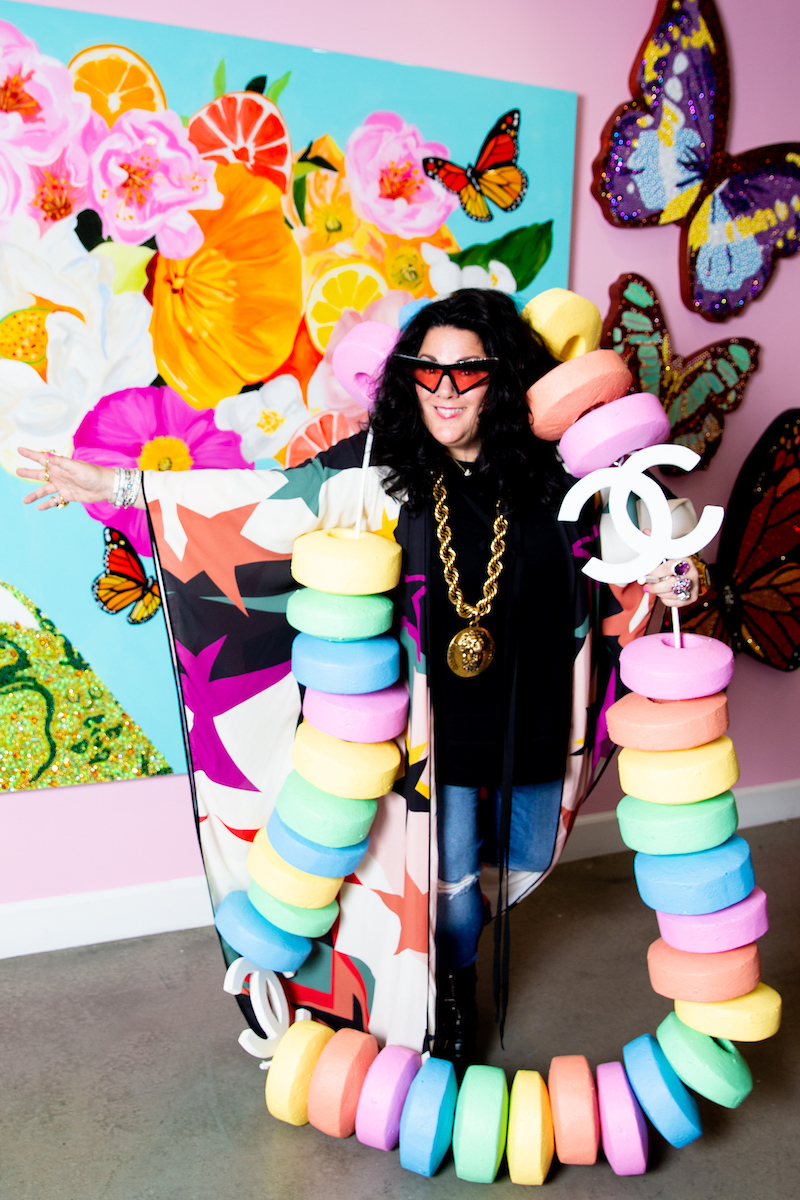 Her work is equally real — with a glossy veneer on top. She revels in fame, fortune and feminine froth, then winks at it.

“I love poking fun at the traditional ideal of what makes a successful American woman,” says Longshore, who has a coffee table book with Rizzoli coming out later this year. “But this isn’t about Birkin bags and your rich-a– husband. This is about opportunity, which we still have even though our president is crazy pills USA. Get off your ass and go make your own money!”

But there’s beauty with the brash, evident in a painting of pink flowers with the words, “It could be worse.”

“I’m a joy seeker and this is about joy,” she says, explaining that her commercial success has been buoyed by her social media presence, brand collaborations and business philosophy to work outside the gallery system and host pop-ups around the world instead. “People who are buying art are living with my spirit, there is an intimacy and connection, and I want to know who they are and I do.”

After she wraps her week in L.A., she’ll check back in on New Orleans, where her studio on Magazine Street is her spiritual home. You can understand her love for that city in her description of it: “New Orleans is a city that celebrates the arts, there ain’t no valet or Bentleys, everything is the uncut possibility of a diamond. There is this mystery and intrigue in the courtyards and poets and chefs and painters and sculptors…the soil is a breeding ground of creative thought. And you get caught in a riptide of wildness.”