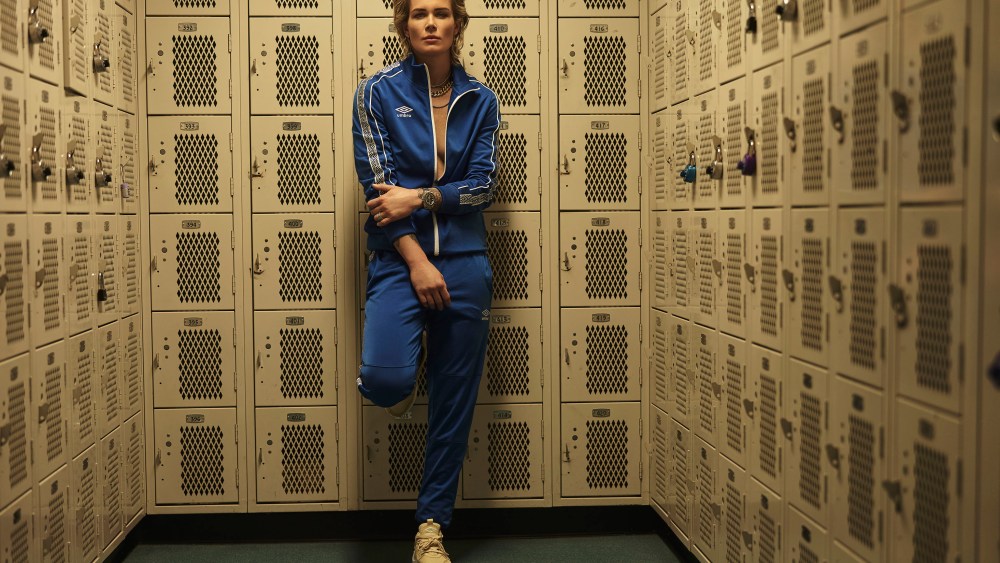 American soccer star Ashlyn Harris knows all eyes will be on her this June as she and her teammates compete at the World Cup in France. While the 33-year-old Orlando Pride goalkeeper acknowledges that her focus is on the tournament, she insists the sporting event is also ripe for major fashion moments.

“I think you’re going to see some crazy, off-the-wall outfits,” she said, sitting inside a trailer parked outside the girl’s locker room at Santa Monica High School where she was shooting her latest Umbro campaign. “I know I’ve reached out to some of my favorite designers,” she said, noting that Venice, Calif.-based hat maker Nick Fouquet is crafting a custom creation for her trip. “Style is everything. You look good, you feel good.”

Harris has been an ambassador for Umbro since 2017. While most athletes have clothing endorsement deals, she has a genuine interest in fashion. In addition to appearing in the Iconix Brand Group-owned Umbro’s campaigns, Harris works with the brand’s team to help style her photo shoots.

“What I love so much about being a part of Umbro and the partnership is they authentically let me be me,” she said of collaborating with the British heritage activewear brand, which is celebrating its 95th anniversary this year. “In previous partnerships, I’ve had to put on what they wanted me to put on and I had to be what they wanted me to be. Umbro loves what I bring to the table and they love my sense of fashion and what drives me creatively.”

For this day’s shoot, Harris brought bags of her personal clothing to pair with pieces from Umbro’s upcoming lifestyle collection. ”I mix and match,” said the FIFA Women’s World Cup 2015 champion, who prefers gender neutral looks. “I like to be able to pick pieces from the women’s side and the men’s side and I make them my own. Honestly, what you see me in is what I would wear every single day. Everything that you see in any of these pictures is something that I genuinely stand behind.”

Harris also favors brands like Louis Vuitton and Off-White, the latter of which Umbro previously collaborated with for the label’s spring/summer 2017 collection. “I’m a big fan of Virgil [Abloh],” she said, adding she’s also currently obsessed with Versace’s Chain Reaction shoes. “I can’t stop buying them. They’re so fierce and I love the big, thick, chunky soles.”

She also likes costume jewelry that consists of layered chains and funky earrings. “That’s who I am; my tattoos, my jewelry, my attitude — it’s the way I express myself,” said Harris, who arrived to the shoot in nylon drop-crotch pants by Diesel. “I don’t like to be stagnant. I love evolution and change. I need fresh, new things to make my brain tick. Fashion is always something new and different.”

The Cocoa Beach, Fla., native credits her humble beginnings with contributing to her creativity and love of fashion. “Back when I was in grade school, I used to draw on all my backpacks and shoes,” she said. “My parents didn’t have a ton of money, so I had to keep reinventing the same clothes. I would get patches and I would pin things and I got different types of white-out markers and I was drawing on denim jackets.”

Young girls have long looked up to female soccer players dating back to the 1999 World Cup when Brandi Chastain infamously tore off her jersey to reveal her black sports bra after scoring the winning penalty kick. At 13, Harris was among them. “I actually remember Nike making a shirt with her on her knees and every muscle bulging is pure excitement,” she reminisced. “As a kid, I had it and I was like, ‘That’s what I want to do.’ That was such an influential part of me wanting to be a professional athlete.”

Harris is now carrying that torch, which isn’t lost on her. Part of that responsibility, she said, is advocating for equal pay within the National Women’s Soccer League. “Is it the best timing right before the World Cup? No,” she admitted. “But it’s the right thing to do because even if we don’t see the benefits, we’re fighting for the young girls who eventually will be in our shoes and hopefully won’t have to start a new career at 35.”

Just the night before the shoot, Natalie Portman, Jessica Chastain, Jennifer Garner, Uzo Aduba, and Eva Longoria attended Harris’ match against Belgium in support of the team’s mission. “Everyone’s fighting the same battle and they’re supporting us,” Harris said. “We’re selling out stadiums. People are showing up and we create a great brand that people want to be involved with and we’re winners and we should be compensated for that.”

Asked about being a role model, Harris deflected, but she later comes back to the thought when discussing why she wore Cardi B’s name on her soccer jersey while her teammates selected the likes of Malala Yousafzai, Ruth Bader Ginsburg, Mother Teresa, Maya Angelou, and Serena Williams during the SheBelieves Cup in March.

“What is a role model?” she wondered aloud. “Sometimes we have these clichés of people who are super impactful. I’m not a blender. I don’t like people who blend into society. I think sometimes, when you’re considered a role model, that means you have to act and look a certain way. I f–king hate blenders. I like people who are authentically themselves and they own it and most importantly, they own their story…. I feel like [Cardi B] embodies all of that.”

The World Cup aside, Harris has another big day around the corner. After popping the question to teammate Ali Krieger in March, the couple is planning a Miami wedding for later this year. “We’re looking to do a castle-type vibe,” Harris said. “It will be a very classic, very white, beautiful wedding.”

She added, “I can’t wait to commit in front of all the most important people that we love — our friends, our family, and the people who have supported us from Day One.”

Harris said she hasn’t yet decided on a look. “Our agency is sorting out who I will wear,” she said. “We’re talking to different suit designers. Ali already went to New York City and found her dress and she won’t tell me a single thing, so your guess is as good as mine, but I know she’ll be beautiful and we’re going to look great.”

Harris has a strong sense of what she’s looking to wear. “I’m open to different ideas and different colors,” she said, “but ultimately, I see myself in an unbelievable, textured Tom Ford-esque white coat with a beautiful bow tie and black tuxedo pants; something along those lines. I have my vision in my head. I just have to figure out how to bring it to life.”