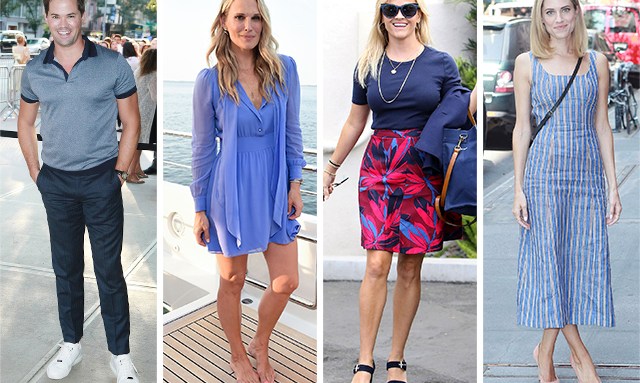 While summer is the perfect time to hit the beach or lounge by the pool, sometimes it’s better to avoid the sun, crank up the air-conditioning and turn on the TV. When the famous set aren’t jetting off to exotic vacations — and sometimes even when they are — we want to know: what shows are they binging this summer?

There’s no doubt “Game of Thrones” tops the list of the most anticipated small screen releases since Memorial Day, but new offerings such as Netflix’s comedy series “Friends From College” and “Glow” have quickly become fan favorites.

We asked celebs such as Reese Witherspoon, Allison Williams, Zac Posen and Olivia Culpo what shows they’ve been catching up on before the hectic pace of fall returns in just a few short weeks.

Andrew Rannells: I just binged “Glow.” I finished that. It’s real good. I’m behind, I mean, I love that everyone’s, like, “If you don’t watch it in the first weekend, all of a sudden you’re behind.”

Allison Williams: I caught up on “Orange Is the New Black,” which is fantastic. I’m also watching “Alias” because I never saw it, and I’m starting to feel really bad about my hand-to-hand combat skills.

Molly Sims: I’m not the best person to ask right now — I have a new baby who is six months. We might be binge-watching “Masha and the Bear.” It’s a Russian cartoon. Look it up.

Olivia Culpo: I love “Big Little Lies,” but I’m also a fan of Food Network, which is not really binge-watching. I kind of prefer it because you can leisurely watch it and not get too attached.

Kirstin Maldonado: I just finished “Sons of Anarchy.” I know that was forever ago, but I’m one episode away from finishing it, so that’s kind of the other thing that I’ve been watching. And also “Big Little Lies.”

Jennifer Fisher: My husband and I just watched “Homeland,” but I’m very into food — I have my own line of salt — so I watch any food TV that I can, but more importantly, something that isn’t super fancy. I binge-watch Food Network late at night.