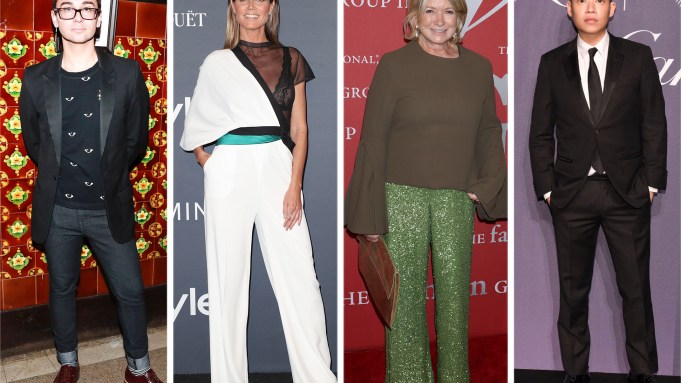 Some, like Heidi Klum, are known for going all out every year, while others maintain Halloween just isn’t their thing. Here, we asked celebrities and designers alike for their best look of Halloweens past.

Jason Wu: I was done up in drag once by Miss Fame, and it was really good. Three hours of makeup. A full transformation.

Heidi Klum: My favorite costume was in 2013 when I dressed up as a 90-year-old version of myself. I was turning 40 that year and everyone kept asking me how it felt to be getting older and I didn’t really feel any different. So I thought, why not show them what old really looks like! I went all out with these amazing prosthetics to really look like an old woman, it took me 10 hours to get ready. I had gray contacts to make my eyes look washed out, I had fake yellowed teeth, brittle nails, a custom white-haired wig and an amazing vintage Chanel suit that I found online. I still laugh when I think about how no one recognized me when I arrived and that is what Halloween is really about, transforming into someone else for the night. That’s why I really like to take my costumes to the next level.

Billie Lourd: God, I don’t know. I’m so lame. I feel like I did a real good skeleton when I was like eight years old and slicked my hair back black and did this crazy face paint thing, but I haven’t been that committed to Halloween since I was, like, 10. It’s the saddest thing ever. I need some inspo. Do you have any inspo? It’s the hardest thing; it’s so much effort. Life is already a lot of effort and then Halloween just puts more pressure on me.

Christian Siriano: My husband and I are normally some type of couple that complements one another during Halloween and this year we are going as a crystallized king and queen. In the past, we have been tons of Disney characters like Ariel and Prince Eric, Peter Pan and Tinker Bell and Lumiere and Babette. But I think the best was our Picasso paintings costumes.

Jill Kargman: We have T-shirts that say, “This is my f–king Halloween costume,” so that’s our default.

Zosia Mamet: I’m not a huge Halloween person — maybe it’s because I spent my childhood in L.A., where you spent Halloween trying to avoid getting egged and having your car keyed, that I don’t think of it very fondly. I will say, feel free to print this, there is a real void for big dog Halloween costumes. [My dog Moose] is a lab-hound mutt. When we got married I was looking for a dress for her and I had a really hard time.

Jordyn Woods: I suck at Halloween. Every year, I’m like, “This year, I’m planning a month in advance.” And then the time comes. Hopefully this year’s the best, but I’m not too sure. I haven’t even tried my costume on.

Me, Wear a Costume?