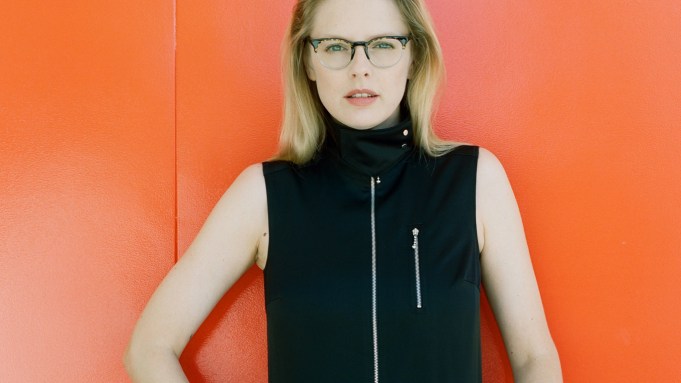 Athena Currey has always believed in the healing power of art. Working in hospitals as an artist in residence, the former model saw the effect it had on cancer patients. “Someone might come in really afraid and angry, and then once we started working together, it really took their focus and energy….They could get lost in [making art],” she says. With that role, though, she could only help one person at a time — and she wanted to do more. After meeting her now business partner, Adrian Rosenfeld, and asking “How can we bring more art into people’s lives?” she landed on the idea of posters.

The duo founded their aptly named company The Posters in 2014, publishing affordable, large-format museum-quality prints from renowned artists such as Marc Hundley, Nate Lowman and Corita Kent. “This way makes a lot of sense to me because I am this customer,” she says. “I love art and I want these beautiful things in my house. I’m not going to be able to buy an $80,000 painting, but I can buy a $55 poster.”

Philanthropy was also an important aspect. “We decided art education was the way that we could hopefully affect more people in a bigger way in the community,” Currey says.

Ten percent of every sale goes to Inner City Arts in Los Angeles, where the company is based. Located in the middle of Skid Row, it’s not a place that most artists would visit. But Currey makes it a point to give tours of the facility, and “once people are there, they get it,” she says. “It does so much for [kids]…for one, it just gets them to school because they look forward to those classes. And it’s critical thinking, it’s all of these other very important social skills.”

This month, The Posters is staging an exhibit at the Bridge Gallery inside Los Angeles City Hall to raise even more awareness. In collaboration with the photographer Collette McGruder, 10 posters will hang in the gallery alongside McGruder’s portraits of children at Inner City Arts. Sponsored by the Mayor’s Office of Economic Development, the hope is to also spark a conversation about how L.A. can support artists — be it tax incentives or affordable housing. “We’re using creativity to try to help the city,” Currey says.

This fall, they’re also launching a smaller size format — 14 by 11 inches — working with new artists such as Andrew Kuo and Bella Foster, and adding framing — all with the goal of giving back. (They’re also celebrating their one-year-anniversary.) “Art education is something that we can all get behind, especially now that there’s less and less of it,” Currey says. “The city is really having a hard time coming up with the funding for it. It’s kind of a crucial time to make sure that kids are getting that education.”