Atwitter Over a Royal Visit 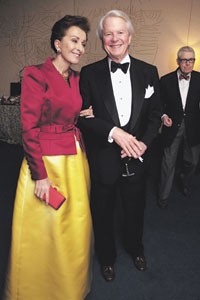 WASHINGTON — On the surface, Washington’s social scene looks discreetly subdued — a luncheon and Rena Lange fashion show for the Salvation Army; a black-tie dinner at the Library of Congress for the National Book Festival, hosted by First Lady Laura Bush; the 75th anniversary of the National Symphony Orchestra, and plenty of buzz about the Kennedy Center’s festival celebrating the performing arts of China.

But look a little closer and the tiny beads of perspiration among the capital’s social set offer a telling harbinger of what lies ahead.

In about five weeks, President Bush and his wife, Laura, known for their dislike of glitz and glamour, will take their biggest steps into the burning spotlight of social entertaining when they welcome Prince Charles and his new bride, Camilla, the Duchess of Cornwall, to Washington. Details of the visit are expected to be confirmed in London today.

Forget the dinner is being prepared as the President’s poll numbers are at an all-time low, or that his administration is reeling from the dual punches of Hurricane Katrina and the quagmire in Iraq. The dinner is about a president entertaining a royal, and Washington always gets more twittery than usual when a royal, especially a British one, is in town.

And there’s added pressure. The state dinner (purists dispute the term because the Prince of Wales isn’t a head of state, after all) will mark, to the month, the 20th anniversary of Charles’ last official visit to the nation’s capital. That dinner, hosted by Ronald and Nancy Reagan, is iconic for one reason: the swirling dance between the chic, glamorous, blushing 24-year-old Princess Diana and one of her idols, actor John Travolta. Watching the princess from the wings were the current president’s parents, then-vice president George H.W. Bush and wife Barbara, never on the Reagans’ A-list when it came to makin’ whoopee.

So Bush fils has a lot to live up to — not only does he get to entertain an older Charles and his second (and less chic) wife, but he has to prove that his White House can outgun the Reagans’ when it comes to entertaining. And dancing isn’t expected to be on the menu.

The exact date of the Charles and Camilla dinner will be confirmed today; the first week in November is all party planners are saying so far. But what no one wants to discuss is who will be serving up names of the potential guests. There are expected to be about 100 at the dinner.

Tops on the list of usual suspects are Washington’s past and present political honchos, including the President’s parents; Vice President Dick Cheney and his wife, Lynne; new Supreme Court Chief Justice John Roberts; Ambassador to the Court of St. James’ Robert Tuttle; Senate Majority Leader Bill Frist and Minority Leader Harry Reid; Secretary of State Condoleezza Rice, and perhaps Colin Powell. Not to mention the Bush twins, Barbara and Jenna, who might spend the state dinner angling for a date in London with the royal princes William and Harry. And nd maybe the First Lady’s favorite designer, Oscar de la Renta, also might make the list.

So expect White House social secretary Lea Berman to enjoy a new wave of sudden popularity as she lines up the seating plan.

Then there are the 120 or so donors to the Prince of Wales Foundation, run by Washington veteran Robert Higdon. E-mails have been flying back and forth offering up the first sign of social smoke. “I just received several e-mails from members of the foundation asking if we’ve been invited,” confides one foundation member. “So far none of us has heard a thing. It’s going to be a very coveted invitation. But, face it, they can’t invite everyone.”

Word from Prince Charles’ camp is that he’s been advised to leave all the inviting up to the White House and concentrate on his mid-October plans for welcoming foundation members for the first time to his mummy’s Balmoral Castle, where the dress code for men is kilts and women are advised to dress warmly. (It is northern Scotland in autumn.)

Perhaps that is why even some of the royal couple’s friends haven’t received their invitations to the dinner yet. But the chatter about it has already begun — even by Camilla herself. Mercedes Bass, in Washington to celebrate the 75th anniversary of the National Symphony a few weeks ago, confided she has discussed the matter with the duchess. “We’re friends and, yes, we’ve talked about it. But I haven’t been invited. Unfortunately, we’re going to be out of town at a meeting,” Bass said, sporting an elegant de la Renta strapless gown.

As for any assists from the State Department, Secretary of State Rice is turning thumbs-down. Tracked down at the Symphony Ball wearing a slinky Rena Lange gown, Rice smiled broadly at the notion of anyone lobbying her for an invitation. “We don’t have anything to do with that guest list,” she happily insisted.

Besides the Bush shindig, there are plenty of other chances to rub shoulders with the royal couple. There’s always a hoped-for seat at the home of British Ambassador Sir David Manning and his wife, Lady Catherine, where Charles and Camilla will stay for the visit. Expect plenty of dazzling smiles Oct. 16 when Lady Manning welcomes friends for the book party to celebrate the American publication of “Death in the Garden,” one of the psychodrama thrillers she writes under the pen name Elizabeth Ironside.

“We’re busy getting ready, of course, but we won’t have anything to do with the guest list,” says Ambassador Manning, whose embassy is a regular stop for Bush administration pals like Secretary Rice, who celebrated her birthday last month with the Mannings, Churchill devotee Karl Rove, and Colin Powell, who was knighted by Queen Elizabeth II. “If it were a dinner for the Prime Minister, then we would definitely be involved in the planning, but not for this visit.”

And what about an unexpected social venue for mingling with the royal couple? Twenty years ago, Prince Charles and Princess Diana popped up at a J.C. Penney store in the Springfield, Va., mall to promote a new line of British export products before heading back to Washington for the National Gallery’s “Treasure Houses of Great Britain” show. This time around, the Kennedy Center seems a likely suspect. Prince Charles’ foundation has donated to a fund for Shakespearean performances and Kennedy Center president Michael Kaiser formerly served as executive director of the Royal Opera House (although his tenure was rather a stormy one).

“Everything is still up in the air,” says one Kennedy Center official about a possible royal visit.

One thing is for sure: This visit will be nothing like the time Jimmy Carter had his first state dinner for a British prime minister. “An old friend called me two days before the dinner for James Callaghan to say neither Evangeline Bruce nor Averell and Pamela Harriman had been invited,” recalls Carter loyalist Tom Bryant. “So I called Gretchen Posten, the social secretary, who said, ‘Yes, we’ll make room for them.'”

Of course, there is a distinct possibility stars, socialites and other celebrities won’t rush to 1600 Pennsylvania Avenue for the dinner this time round. Charles isn’t Prince William, after all, and Camilla, as fun as she can be, is no Diana in the chic sweepstakes.

So maybe President Bush will end up with the best of both worlds — a few kudos for introducing his ardent loyalists to a future king and still be able to get to bed by 10 p.m.