In New York, the weather held up despite thunderous threats of rain for the opening night of "Macbeth" in Central Park. 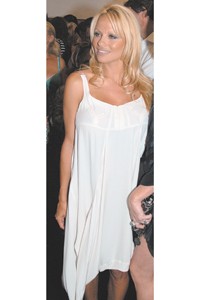 “I’ve already gotten naked and it’s not even nine o’clock — that’s got to be a good night,” said Pamela Anderson after she happily disrobed for PETA in the window of Stella McCartney‘s Bruton Street store in London. The buxom actress’ modesty was barely covered by a banner in the window that read, “We’d rather bare skin than wear skin.”

Stella and Mary McCartney, Chrissie Hynde, Gillian Anderson, Martina Navratilova and Sadie Frost joined Anderson, who was in town to host PETA’s humanitarian awards honoring both McCartney sisters, to indulge in guilt-free cocktails made with organic spirits, vegan sushi and fruit tarts. Stella said she was keeping an eye out for light-fingered rock stars with an eye on her clothing racks. “Chrissie told me it was the perfect night to nick loads of clothes,” the designer joked, “so watch out for her — she hasn’t got a big bag, but there’s a lot of room under that waistcoat.”

Over in New York, the weather held up despite thunderous threats of rain for the opening night of “Macbeth” in Central Park. The starriest crowd in years turned up for a pre-theater picnic to support Liev Schreiber‘s turn as the tragic Scottish king: Tom Hanks, Marisa Tomei, Ali MacGraw, Candice Bergen, Ethan Hawke, Meryl Streep (who’ll play Mother Courage in the park later this summer), Kevin Kline (who’ll play King Lear this fall), Jessica Lange, Julianna Margulies, Steve Martin, Rachel Weisz and even Mayor Michael Bloomberg and Bill Clinton. Bergen’s daughter, Chloe Malle, graced the buffet line with playwright John Guare, while Naomi Watts, Schreiber’s girlfriend, chatted with a T-shirt-clad Philip Seymour Hoffman. But Schreiber and his co-stars weren’t the only ones being applauded. Just before the performance began and as the audience was quieting down, Hawke shouted, “We love you, Bill Clinton!” Frank Whaley gave Hawke a high five and a pat on the back, but there was no equally adulatory response from the former president.