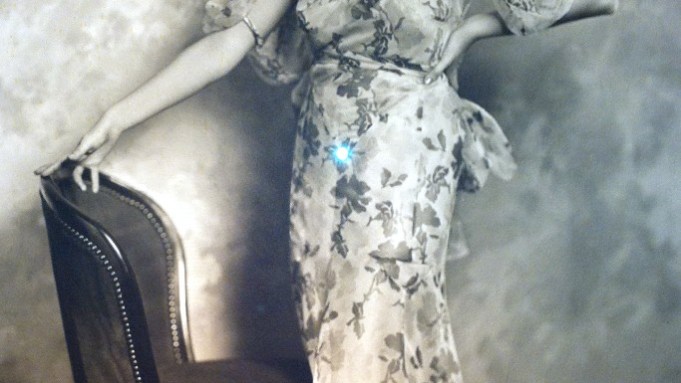 Just as she preferred to keep herself under wraps for much of her life, the late Huguette Clark kept several of her stunning jewels stowed away in a bank vault for 70-plus years. Christie’s is now gearing up to auction some of her keepsakes Tuesday, including a 9-carat pink diamond ring and a 20-carat D-color diamond ring.

During a preview of the 17 baubles that belonged to the heiress, who died last spring two weeks shy of what would have been her 105th birthday, Rahul Kadakia, head of jewelry at Christie’s, described how his team of 10 had to squeeze into a cramped, poorly lit room to appraise the jewelry in the vault, which had not been opened since the Forties. “It was full of Cartier cases and I thought, This can’t be so bad,” he said humorously.

Finding what turned out to be a trove of period jewels from the French houses of the early 1900s was a career highlight for Kadakia. What really caught his attention was a small unmarked box that held the 9-carat pink diamond mounted in a Belle Epoque setting by Dreicer & Co. That 1905 piece is believed to have belonged to Clark’s mother, Anna, and is expected to hail between $6 million to $8 million at auction. Gesturing toward a diamond and multigem charm bracelet, Kadakia noted that each charm had a heart-shaped ruby. “Was she a romantic? Possibly,” he said.

Photographs of Clark and her family, as well as a self-portrait of Clark painted in 1930, line the walls of the gallery, but unlike the baubles, they will not be auctioned. Two of the shots have personal inscriptions written by Clark to family members.

Another glimpse of her family ties can be found in the onyx, turquoise and diamond Cartier frame with a cursive “A” that holds a hand-drawn portrait of a teenage girl who is believed to be the heiress’ older sister Andrée Clark, who died of meningitis in 1919. Clark’s other keepsakes include an intricate Cartier diamond bracelet and a Tiffany & Co. ruby, sapphire, emerald and gold bracelet that was possibly designed by Louis Comfort Tiffany. The Clark lot is expected to fetch between $9 million and $12 million.

“An enigmatic, private figure,” the copper heiress Clark ducked out of society for decades and later in life changed the names she was registered under in the various hospitals where she lived because she didn’t want to deal with the public, Kadakia said. One of the few to have toured Clark’s sprawling 28-room penthouse apartment at 907 Fifth Avenue, Kadakia said it was evident she was part of a very social family. (At the time of her death, that piece of property was being used to house her massive doll collection.)

The easel she used to paint with was still set up there and music was said to be another interest, perhaps due to salons her mother liked to host. “She lived a very happy time at one point,” Kadakia said. “Later in life Miss Clark was not very gregarious. But the family had great style and taste. This was jewelry that was meant to be worn — to be wined, dined and seen in. They had a great eye, very fashion-forward. There are a pair of beaded Cartier earrings that look like something you would see in Bergdorf Goodman today.”