New York's Lower East Side and Los Angeles' Silverlake neighborhoods probably emptied out during the recent South by Southwest music festival, as hordes of hipsters headed to Austin for the weeklong affair. 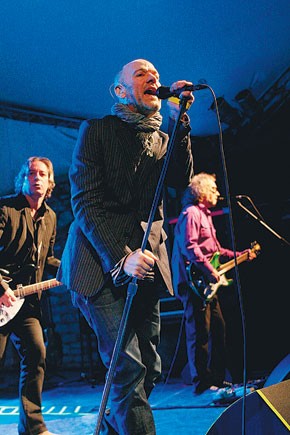 New York’s Lower East Side and Los Angeles’ Silverlake neighborhoods probably emptied out during the recent South by Southwest music festival, as hordes of hipsters headed to Austin for the weeklong affair.

Commonly called SXSW — or, for the ultracool, simply “South by” — the festival, held March 7 to 16, is to the music industry what fashion week is to Seventh Avenue: a massive, amorphous convention. New bands can find record deals and old bands can reconnect with fans, like REM, which previewed the April 1 release of its first album in four years, “Accelerate,” with a half-hour live concert.

But despite the skinny-jean and colored-Ray-Ban-wearing city slickers packing the streets, local nonchalance prevailed. Even the nearby presence of Brad Pitt, in town shooting Terrence Malick’s “Tree of Life,” couldn’t distract festivalgoers from the flood of indie bands.

Without enough local music venues to accommodate the 1,775 scheduled bands — not including countless surprise gigs — everything from barbecue pits to parking lots became impromptu rock clubs. Established joints, such as Antone’s, Emo’s and the Mohawk, were filled with groups playing cheek-by-jowl. A normal setup was one band inside, a second on the patio and a third on the roof, all performing simultaneously.

On Wednesday, The Kills played at the Levi’s/Fader Fort, though Kate Moss was in New York, not cheering on her reported fiancé, guitarist Jamie Hince. Friday, Vampire Weekend, who came to SXSW last year as an unsigned band and returned this year as one of the most popular, played a packed concert at Spin magazine’s party venue, Stubb’s Bar-B-Q. (The 90-degree heat forced the preppy-chic band to abandon its signature cardigans in favor of cotton button-downs).

Meanwhile, Zooey Deschanel revealed her new band, She & Him, alongside indie darling M. Ward, at the Press Here publicity firm’s garden party at the Historic French Legation. The actress-turned-musician found out that music fans aren’t much for celebrity. “Zoooooooey!” shouted one as she started singing. “Which one of you said that?” she said accusingly, staring into the crowd, which responded by shouting her name from all sides. “OK, I get it,” she acquiesced. “Six of you.”

And though movie stars were not in abundance, swag houses à la Sundance sprouted up all over town. MySpace and Spin shared a location where brands like Ben Sherman gave away goods, and AG Jeans gifted musicians at the EastSport Cafe, where free grub was also on offer.

The one Los Angeles-style party that happened, hosted by blogger Perez Hilton (sponsored by 5 Gum chewing gum, of course), featured acts such as N.E.R.D. and Katy Perry, but not much action offstage. For a town whose motto is “Keep Austin Weird,” it seemed the event was too commercial: While Cisco Adler worked the VIP area, hipsters stayed clear, preferring to slink to more quirky hideaways.