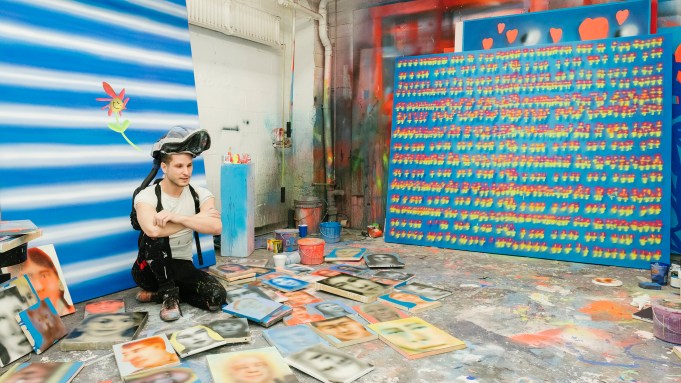 One morning ahead of the opening of his first solo exhibition at Jeffrey Deitch’s gallery, Austin Lee was solidly in the zone. Music from the band Wilco played from the computer speakers in his Long Island City subterranean studio, cups of paint were littered on the ground, and his colorful, large-scale paintings, in various stages, dotted the perimeter of the room. Soon, many would be carted across the East River and installed at the SoHo gallery, united under the tagline “Feels Good.”

“Whenever I do a show, I just make the work and then I start to see the connections between everything,” says Lee, himself streaked with the various pops of colors used in his airbrushed paintings. Much of his recent work stems from an exploration into the dichotomy of things that evoke both positive and negative effects. “The most obvious would be social media, like how it’s really nice to feel good that you have these likes, but then someone’s behind the scenes kind of controlling that, or even choosing when you see the likes,” he says. “You know what I mean? But it still feels good, too.”

Lee has harnessed technology, particularly emerging mediums, throughout his creative practice. His process begins on a computer, where he plans out the image he wants to paint. While it’s not a straight transfer from digital to physical, the challenge of figuring how to best replicate computer-produced visual effects has benefited his practice.

“I try to mix the best of digital and physical, because I think both do things well in different ways,” he says. “On the computer, the color’s really luminous because of the light, versus a painting’s subtractive color,” he continues, turning his attention to the nearby painting-in-progress of a horse upon a luminous red background. “On the computer that’s really easy to make, but then to make that with paint is a little trickier. So for me, I’ll be like, ‘Oh, that’s really cool — how do I paint that?’ If I just made a painting physically first, I might not arrive at that. On the computer, it’s endless drawings. I could just draw forever and there’s no risk and I can try everything.”

Lee has recently ventured into the world of virtual reality, where he is able to sketch out and build large, colorful sculptures, which he then creates using a 3-D printer. Both technologies have allowed him to push his practice significantly.

“It just feels like drawing in space with objects. It’s really different than clicking with the mouse,” he says. “I can do things in VR that I couldn’t really do if I was making it with clay or something. I can make these things that don’t have to use gravity in the same way. I can just make a huge sculpture and see what it feels like to look up at it.” VR also creates a curious hybrid of digital and physical creation; in a way, it allows him to harness the positive attributes of both mediums at the same time.

“You’re completely in this digital world, which is more bodily in a weird not-body way,” he says. “When I use it for hours and I take it off, reality doesn’t make sense anymore, it’s really surreal.”

Lee brings up computer scientist and virtual reality pioneer Jaron Lanier’s book “You Are Not a Gadget.” In the years since developing VR technologies, Lanier has turned against the digital environments he helped innovate.

“[He describes] how it actually changes your perception of your physical body. Where like, say if you’re in a VR world and you have a lobster hand, you start to feel like that’s your hand. And that never made sense to me. I thought he was just kind of exaggerating or being more philosophical about it, but it’s really true actually,” Lee says. “You realize your experience of the world is just input, really. If you swap that with something else then it’s like your brain doesn’t know the difference eventually.”

Despite his use of digital tools, Lee connected with Deitch through real-life word of mouth; the gallerist invited him to hold a solo exhibit after his involvement in the recent group show “Punch,” curated by Nina Chanel Abney. And while the scale of much of Lee’s work pushes the limits of his current Queens studio space, Deitch’s gallery provides a more airy setting for his sizable paintings. (Not surprisingly, Lee planned the layout of everything on his computer ahead of time.)

Lee will also publicly exhibit his portrait series for the first time. The smaller paintings began as a way for him to refine his technique of using the airbrush, and also served as a way for him to gift art to friends and colleagues he’s met over the years. (The day before, he painted The Hole gallerist Kathy Grayson, who he’s known since he was a grad student in art at Yale, and her rescue Pomeranian Bertram. Bert, it should be noted, clocks over 371k followers on his Instagram account.) After painting a few portraits, Lee lets his subject select one to keep for themselves. The resulting collection of paintings, he notes, are “probably the bad ones.”

The abstracted portraits present a strong exploration into the subtlety of expression. When asked whether one of the portraits, hung up on the wall by his computer, is of a cat, he demurs — it’s an ex-girlfriend. Lee, who credits Leonardo da Vinci as his favorite painter, points to an interest in the uncanny quality reflected in many of the seminal painter’s portraits.