The New York native focuses on the Hamptons scene for her second novel, "The Summer We Read Gatsby." 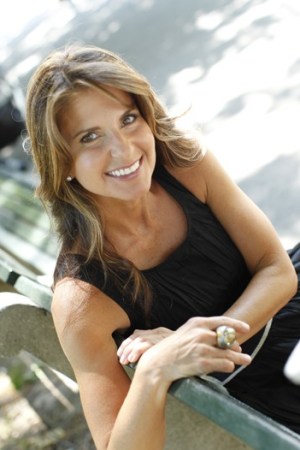 Walking into Upper East Side watering hole Via Quadronno on a steamy day in May, Danielle Ganek fits in seamlessly with the mixed crowd of polished mothers grabbing a late morning cappuccino and Madison Avenue art gallerists skimming newspapers. With her slim physique clad in an old Prada shift dress, glossy brown mane touched with tasteful highlights and accessories both modest (requisite wedge heels) and double-take worthy (multicarat diamond studs and a striking Sevan cocktail ring), Ganek manages to slip in unnoticed, save a quick hi to fellow 10021-er Marisa Noel Brown, the clearest indicator of belonging.

But to hear the 46-year-old author tell it, looks can be deceiving. Though she is American and has lived in New York for more than 20 years, Ganek’s international upbringing in Brazil and Switzerland has fostered a sense of foreignness.

“I feel like I’ve taken that feeling and harnessed it in the best way I knew how. I’m almost more of an observer than an active participant in wherever I go,” explains Ganek between sips of an iced latte. “Being a fish out of water is great for a writer because you really pay attention because you want to fit in.”

Ganek has channeled that sentiment in her second novel, “The Summer We Read Gatsby,” currently out from Viking. Set in the Hamptons, the book is narrated by Cassie, a Switzerland-based young journalist who spends the summer of 2009 there after her Aunt Lydia leaves her beloved cottage to her and her half-sister, Peck. The two siblings first clash (Cassie is quiet and skeptical of the social scene; Peck, an aspiring actress, is its biggest proponent), but they soon bond when a piece of Lydia’s artwork, a potentially unsigned Jackson Pollock painting, goes missing. Their caper to uncover it takes them everywhere from fancy summer parties to more under-the-radar enclaves, providing a multifaceted portrait of the Hamptons through Cassie’s increasingly educated eyes.

“I liked the idea of a character having to come and deal with America and this weird summer that was sort of the end of an era and this sort of boom lifestyle,” explains Ganek (the Gatsby portion of the title comes from the sisters’ joint love of “The Great Gatsby”). “I was always so captivated by the idea of the Hamptons’ artistic legacy. But then it has become this other thing.”

Ganek herself is no stranger to the current Hamptons lifestyle: she and her hedge-funder husband, David, have been going out there for more than 20 years, first staying in a shack not dissimilar to the one Aunt Lydia bequeaths to Cassie and Peck, and even in share houses when they were younger. For the past nine years, they’ve owned a house in Southampton. And if some of the book’s ancillary characters — the flamboyant decorator Hamilton; the blonde, minidress-clad real estate agent-cum-cougar Laurie — might resemble the couple’s East End neighbors, Ganek is unconcerned.

“That’s a compliment if they feel like real people, but that’s what a fiction writer does: You take elements from every person you’ve ever met and then you put them together into another character,” she says with Swiss-like diplomacy. “I get the sense that people are excited that it’s set [in the Hamptons]. People who are out there are like, ‘Oh, we get to read about ourselves.’ It’s either voyeuristic or it’s looking in the mirror.”

In Ganek’s case, it’s arguably a combination of both. Born in Chicago, the eldest of three daughters, she moved to São Paulo when her father’s job as a financial vice president of the company W. R. Grace took them there. She spent most of grade school and high school in Lausanne, Switzerland, and then returned to the States to attend Franklin & Marshall College, where she majored in English and met David (the two didn’t start dating until after school). After graduation, she moved to New York to fulfill her longtime magazine ambitions, first working as a style editor at Woman’s Day, then as a merchandising editor at Mademoiselle. She also served as a creative director for the New York outpost of Galeries Lafayette.

But Ganek always harbored a passion for writing and soon started to pursue it full time, freelancing and taking courses at Columbia and the Writer’s Studio (and having three children, two boys, age 15 and 13 and a girl, age 9). Her first novel, 2007’s “Lulu Meets God and Doubts Him,” was born out of a short story about an aspiring artist.

Ganek’s own vantage point of the art world is that of a collector, a position about which she remains modest. David, who works for the hedge fund Level Global Investors, is a Guggenheim trustee and he and Ganek have filled their 740 Park Avenue apartment with works by Richard Prince, Diane Arbus, Robert Frank and Ed Ruscha.

“We buy what we love,” she says, simply.

As for the New York social game, Ganek downplays her involvement. When in the Hamptons, she and David “don’t go to many parties,” and as for her charitable causes, she speaks passionately about the Southampton Fresh Air Home, a camp for underprivileged disabled children with which she has been involved for nine years, but leaves it at that.

It seems despite all the signs, superficial and otherwise, that she is the quintessential, prominent New Yorker (Dennis Basso is hosting a book party for her tonight, where expected guests include Samantha Rosen, Tory Burch, Pamela Gross and Nina Griscom), Ganek is loathe to consider herself a solid member of any realm of social exclusivity.

“I can’t imagine what it would feel like to be an insider anywhere,” says Ganek. “I think there’s something universal of always feeling like a foreigner.”