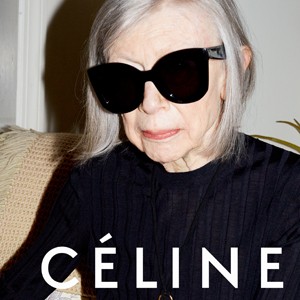 Joan Didion, an unmatchable talent, who was fearless in her writing and inquisitive with her insights, died Thursday at the age of 87.

As the author of 19 titles and even more screenplays, Didion was a literary force, who at times turned her personal pain into prose. In 2005, Didion was awarded the National Book Award for nonfiction for “The Year of Magical Thinking,” which centered on the loss of her husband John Gregory Dunne.

Through the decades, Didion opened windows onto her writerly life in interviews with WWD. In a 1992 interview, for example, Didion spoke of her impetus to write. “I started out thinking things were pretty coherent. Then I was surprised when they weren’t. So I decided I better tell people,” she explained. “I write about what astonishes me — about what surprises me. Writing is such a perilous, chancy thing to do — to make something out of nothing. It requires nerve, constant balls. It requires as Norman Mailer said, the maintenance of a certain minimum ego level.”

Wiry, delicate and blue-veined, Didion’s physique belied her might. Speaking in a tone that one WWD writer described as sounding as though it is treading on eggshells, Didion once said, “Writing a novel is quite tedious. You antagonize your friends, your family. The whole fun of it for me is discovering the plot and character as I go along.”

Even later in life, the intellectual rewrote another chapter in her life by becoming a style icon. In 2015, Phoebe Philo recruited Didion to star in the Celine ad campaign sporting a black crewneck, black oversize sunglasses and a streak of red lipstick.

Raised in Sacramento when it was an isolated arid spot, Didion’s roots in California dated back to her ancestors’ arrival in 1848. They had come westward by way of Illinois with the notorious Donner Party, a group that when stranded in the Sierras in a blizzard was forced to eat their dead. (Her forebears had already forged north at Humboldt Sink, Nev.)

After attending Berkeley, Didion crisscrossed the country to New York in 1956. After an eight-year run at Vogue, she married Dunne and the couple migrated to California. Their daughter Quintana died in 2010 and the writer mourned her in “Blue Nights.”

The writing life, the promise of youth, psychedelic ’60s, Nancy and Ronald Reagan, forest fires, earthquakes, real estate, screenwriting, chronic illness, the loss of a child and her own mortality were some of the numerous subjects that she covered in her books.

Speaking with WWD about her book “Salvador,” which was published in 1983, Didion said she had felt afraid the entire time that she was in the country. “Being afraid makes you feel constrained, depressed. You know how sometimes you have a premonition about traveling on a plane? That’s the way you feel in El Salvador when deciding whether to go out to dinner.”

Didion’s clear-eyedness was evident throughout her work and life. Speaking of “Salvador,” she said, “There’s a high tolerance of terror there. A lot of things that might shock us, pass by. Not every single person is capable of doing what some people have done. There are the doers, and there are the done-to.”

As a published author, Didion relied on Henry Robbins as a longtime editor at Farrar, Straus & Giroux and later at Simon & Schuster. The second publishing union wasn’t always a contented one though. At one point, Simon & Schuster was said to have kept her under contract when she was ready to leave. Editor Michael Korda was said to have remedied that.

After returning to New York’s Upper East Side with her husband John Gregory Dunne after living in Los Angeles, Didion installed such keepsakes as an oversize black-and-white photo of an endless highway, stretching to the Sierras on the horizon. “Welcome to California” read a side beside the road, and “Loose Gravel” warned another. That wry attention to detail crops up again and again in Didion work including “Slouching Towards Bethlehem,” “The White Album” and “After Henry,” among others. She also coauthored with her husband the screenplays for “The Panic in Needle Park,” “Play It as It Lays” and “A Star Is Born.”

Photographer Albert Watson recalled Thursday shooting a portrait of Didion in her apartment, which was surrounded by books. “Her whole world was books. I found her interesting and a really fascinating character. I have photographed some many people, who were interesting, but she was definitely one of them.”

Watson said that a photograph of her “very elegant hands” is one of his favorite shots and one that he has used in a couple of his books. He said, “She was fabulous. You got the feeling from Joan Didion right from the beginning that you were in the presence of a real intellectual. I know that seems really obvious that she was really smart. But without her saying much, you could feel that from her.”

Like her straightforward and uncomplicated writing, Didion didn’t take detours in interviews. Explaining their relocation to Manhattan after a 10-year stretch in Brentwood, in 1992, Didion said, “It was just a whim — not a thought-out decision. We had had a small apartment here, but we didn’t like the divided time. It just seemed time to make a change for the sake of making a change.”

Swimming pools, the garden and supermarkets were the only things that she missed about her Los Angeles life. “Wheeling around the wide open aisles of a Pacific Palisades supermarket on a Saturday morning wouldn’t interrupt whatever you were thinking about and you could fill up the cart with everything that you needed for the week. It didn’t require a lot of contact. Then you put everything in your car and drove home, and you could still be alone, thinking about the same things.”

Despite her bicoastal life, Didion never lost sight of that California light. Describing in the 1992 interviews how sometimes she would be walking down a New York City street looking west when the sun is almost setting, and she said that she would think, “It isn’t night yet — it’s not dark yet in California.”