Ominous clouds and a bit of drizzle didn't stop scores of children and their Birkin-toting mummies from attending the third annual Baby Buggy Bedtime Bash. 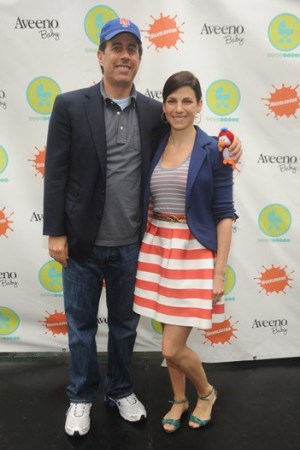 Ominous clouds and a bit of drizzle didn’t stop scores of children and their Birkin-toting mommies from attending the 3rd annual Baby Buggy Bedtime Bash held in Central Park’s Wollman Rink Tuesday afternoon. Fuzzy WordGirl and Uniqua from the “Back Yardigans” greeted pajama-clad youngsters (the suggested dress code) before they ran wild through the skating rink, transformed into a carnival complete with waterslides, cotton candy, go-carts and airplane rides. Parents like Samantha Boardman, Kalliope Karella, Adelina Wong Ettelson and Melania Trump looked on, or in some cases accompanied their tots.

“I went on the boat ride with them,” said Christy Turlington as her kids Grace and Finn sat transfixed by musical act Outback Aussie. “But I can’t do that swing thing — it makes me [nauseated].”

Another Aussie made a brief appearance, much to the grownups’ delight. Hugh Jackman accompanied wife Deborra Lee-Furness and their children Ava and Oscar — and looked a bit overdressed in a Louis Vuitton suit.

“This is not what I would normally wear,” he apologized, before running out to another event, and grabbing a hot dog for the road.

Of course, despite the event’s name the children in attendance still had an actual bedtime to attend to later in the evening, sugar rush notwithstanding.

“Tonight everything is abandoned for the sake of fun and a good cause,” said Jessica Seinfeld.