Back to Classics at Loewe Fete 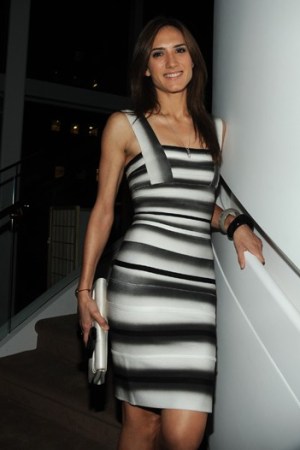 Less than a week after it served as the scene of Rena Sindi’s raucous Dior Beauty bacchanale, The Magic Room in the LVMH Tower was back in commission on Tuesday night—this time for a dinner in honor of Spanish leather goods brand Loewe.

It was hard to believe guests, who included Olympia and Fiona Scarry, Jeanne Greenberg Rohatyn and Terry Richardson, were even in the same place: gone was the dj booth blasting Kanye West and Lady Gaga (Frank Sinatra played softly over the speakers), gone were the plastic tables shaped like lips (elegant long wooden tables dressed with opulent china were set up instead) and gone was the parade of on-theme pink and red dresses. (“Everyone here is in black and white,” noted Olivia Chantecaille, herself in a white blazer and black slacks.)

The change of pace seemed appropriate, given the fete’s occasion. While some guests were unfamiliar with the brand (it hasn’t been sold in the U.S. until now), others were well acquainted with its conservative aesthetic. “Loewe is like a Fendi or Goyard,” Olympia Scarry explained to guests. “It’s very traditional, very classic,” continued Zani Guggelmann, “Very Spanish.”