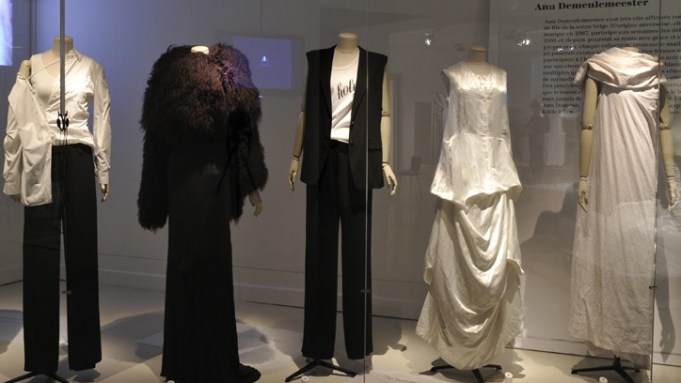 PARIS – If the Seventies are the decade taste forgot, were the Nineties all about nothing?

Not so, said the curator of an exhibition at Les Arts Decoratifs here called “An Ideal History of Contemporary Fashion, Vol.2,” which opens today.

“People have this bad image of the Nineties, thinking that it was less creative, which is not true…We expect a lot of minimalism, but there were also all these amazing sculptural creations,” said Olivier Saillard. “After the Eighties, [the Nineties] rinsed the [palate], it was like a white page.”

The decade also saw the major Japanese designers come into full possession of their vocabulary, said Saillard, who cited Yohji Yamamoto’s sensual ode to French couturier greats such as Elsa Schiaparelli, Coco Chanel and Christian Dior, as well as Rei Kawakubo’s “revolutionary” permanent state of rupture with what had gone before.

The show focuses on cherry-picked masterpieces from the across the last two decades in fashion. They include looks from Comme des Garçons’ iconic “lumps and bumps” collection to couture looks designed by Claude Montana during his brief stint at Lanvin in the early Nineties.

“Even if today we no longer really pay so much attention to Issey Miyake’s Pleats Please, back then it was a revolution,” said Saillard, who for the show aligned minimalist icon Helmut Lang, with Prada and Martine Sitbon, as designers sharing a “common territory of urbanism.”

The show spotlights creations by Viktor & Rolf and the late Lee Alexander McQueen, whose designs and artistic performances go hand in hand; the rise of the Brits, like John Galliano and Vivienne Westwood; and the masters of French couture chic, such as Christian Lacroix and Karl Lagerfeld for Chanel.

It closes with emblematic creations by Nicolas Ghesquière for Balenciaga and Alber Elbaz for Lanvin, as two designers who, Saillard said, were the biggest surprises to have come out of the most recent decade.

“At the end of the Nineties and the start of the year 2000, there was this feeling that the fashion world was [dominated] by big fashion groups with imperialist visions of luxury,” Saillard said. “These designers showed that a more refined world was possible; that luxury was not necessarily synonymous with ostentation but rather experimentation and research, a kind of laboratory.”