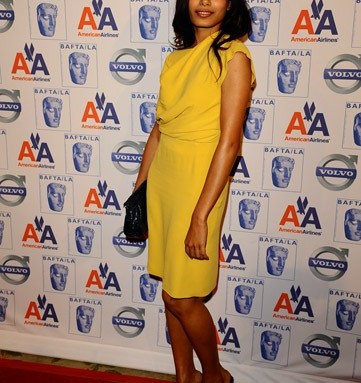 The early days of award season 2009 may be more restrained, but there was no shortage of events this past week in anticipation of the Golden Globes. “I don’t come to Los Angeles very often, so it’s been great fun. Just parties and parties and parties,” said Kristin Scott Thomas at BAFTA/LA’s annual tea party at the Beverly Hills Hotel on Saturday.

Brits including Kenneth Branagh and Saffron Burrows warmed up with a cuppa alongside Americans like Leonardo DiCaprio and Josh Brolin.

“I had a girlfriend who was English for a couple years so I’m used to it,” said Brolin.

But Clint Eastwood was having none of it. “These British people — it’s all smoke. They don’t really do tea. They just do Champagne, so I’ll do Champagne,” said the “Gran Torino” director and star with a flute in hand.

Meanwhile, “Slumdog Millionaire” star Freida Pinto recalled her own party foul earlier in the week. “I had just stuffed my face, and Angelina Jolie came up to me and said, ‘Your film is fantastic,’ and I’m like [with a mouthful of food], ‘Mmm mmm mmm,’” she said.