Bang Bang, Tattoo Artist to the Stars, on His New Book 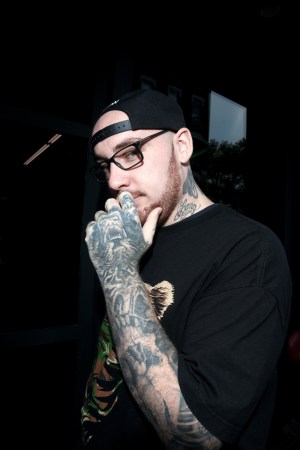 When Keith McCurdy — more famously known as Bang Bang — first tattooed Rihanna, he had no idea who she was. “She wasn’t really famous yet,” he says, searching for an excuse for his ignorance. “’Umbrella’ had just come out…”

“Admittedly, I don’t know who’s dating who, or what they’re wearing, or any of this,” he continues. “It’s so funny, people always think I have my finger on the pulse. But I don’t — I run my company, I play with my children and go to theme parks. I could tell you more about what’s going on in Disney World than what’s going on in pop culture.”

Therein lies 29-year-old McCurdy’s charm. Along with Rihanna, he’s tattooed Justin Bieber, Cara Delevingne, Rita Ora and Katy Perry. Since opening his studio, Bang Bang NYC, on the Lower East Side in 2014, he’s been wait-listed for months on end. His secret to success? Tapping into the burgeoning connection between inking and fashion. And his down-to-earth, aw-shucks attitude doesn’t hurt, either. His first book, “Bang Bang: My Life in Ink,” out Tuesday, chronicles his unlikely rise to fame.

Born in Delaware, McCurdy was a self-described “f–k-up. I did a bunch of drugs, got in a lot of trouble, always getting kicked out [of school].” Tattoos, in a way, set him on the right path. “My parents told me,  if you get the honor roll you can get a tattoo. And damn, I got the honor roll right away,” he says. After that, he was hooked. He bought a kit online, tattooing a Japanese Kanji character onto his thigh in his mom’s kitchen.

That night, he tattooed for eight hours straight, and hasn’t really stopped since. He’d ink his coworkers in the kitchen of Red Lobster, and landed his first official tattooing job at a parlor outside a trailer park in Newcastle, Del.

After a year, he parlayed that into a gig at a grungy shop on Sixth Avenue in Manhattan, called Village Pop NYC, where he earned the nickname “The King of the Sewer.” “I would tattoo all of the tattoo artists, and if ever somebody came in with [an idea] someone else couldn’t do, they would say, ‘Oh, you gotta go to Bang Bang,”’ he recalls.

McCurdy is 6 feet, 2 inches tall, and is usually found wearing a backwards hat and square-framed glasses. He doesn’t look, per se, like someone who has tattooed some of the most famous pop stars of this generation, except for the fact that he himself is covered in ink — from his daughter’s face on one arm to the namesake pistols on his neck. He tends to talk in long, stream-of-consciousness sentences, often punctuated with a “you know what I mean?” because he wants to make sure that you do.

After a few years of “bouncing around” and tattooing out of his apartment, McCurdy decided to open his own space. “I can’t work for anyone that I’ve met in the tattoo industry…so this idea of reinventing the experience is what I wanted to do,” he says, noting that the average age of his employees — who now include 12 artists, two managers and three assistants — is around 24. “It’s not inherently a welcoming community or industry, so when I hire people I try to look for young, enthusiastic artists who are friendly.”

He also knew his focus from the beginning. “All my efforts have been towards the fashion industry,” he says. “And we’re the busiest store I’ve ever seen.” Perhaps the biggest example of his efforts is Delevingne’s temporary cherry blossom tattoos for this year’s Metropolitan Museum of Art Costume Institute Gala. (The theme was “China: Through the Looking Glass”). It took 11 hours — “had I tattooed it, I imagine it would have taken the same amount of time” — and received more press than the model’s Stella McCartney jumpsuit.

The celebrity stories, of course, don’t stop there. There’s the tale of tatting Bieber on a plane (on a flight from Panama to Canada shortly after Biebs was arrested in Florida), and the one where he inked the Super Bowl numerals onto Perry’s finger immediately following her halftime performance. “Here’s Aaron Paul and Lenny Kravitz and Missy Elliot and John Mayer,” he remembers. “The pressure…that stuff is tough. But I like it.”

And no wonder, given his story. “You know, I used to be a busboy at Red Lobster, a high school dropout, so I appreciate anyone who wants me to tattoo them,” he says. “I have six Kanji characters now, and they’re pretty bad. But I would never cover them up because they’re so important, it’s a constant reminder of where I started.”