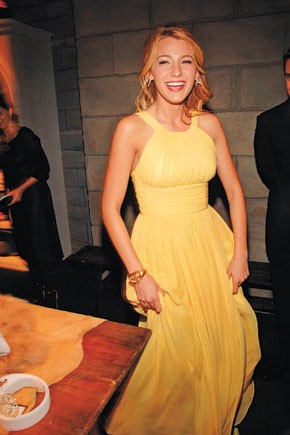 There were no clarions, drawbridges, damsels in distress or fire-breathing dragons, but the opening of 7th on Sale at the 69th Regiment Armory Thursday night felt like a scene out of “A Connecticut Yankee in King Arthur’s Court” — or the latest installment of “Harry Potter,” sans Dumbledore. There were tapestries on the walls, waiters in breeches, flaming torches, regal crests (it wasn’t clear whose) and a red-and-white burlap tent where dinner was served.

“When does the jousting begin?” was a joke made throughout the night — funny the first time around, less so after the 25th. Many compared it to Disneyland or one of those medieval theme restaurants off in the wilds of New Jersey. Thank goodness dinner wasn’t huge legs of mutton or pork, but lobster or steak potpies.

Medieval times aside, the night was really about one thing: shopping. Celebrities, socialites and every designer in town, including a few in from Europe, scoured the racks for discounted designer goods, all in the name of raising money for HIV/AIDS research.

Those arriving on time scored some of the hottest deals. Unfortunately, a few of the CFDA/Vogue fund finalists who were being awarded turned up a tad late, their cars having driven them to the uptown armory by mistake.

The photography booth — offering delights from Helmut Newton to David Bailey and Miles Aldridge — was the first to sell out, with eager buyers lining up at 5 p.m. before the doors opened. That left guests including Marc Jacobs, Michael Kors, David and Sybil Yurman, Diane von Furstenberg, Amy Adams, Dita Von Teese, Eve (whose dress of coins jingled when she walked), Tommy Hilfiger and Alice Eve to peruse the furs, gowns and accessories on display. There wasn’t enough Topshop on the floor if you asked Philip Green, who laid into Vogue staff for not displaying enough of the brand’s product.

“Normally I would find something like this very intimidating,” said Jennifer Connelly, with husband Paul Bettany in tow. “But I’m looking for a birthday present for my friend.”

“I didn’t even know Ralph Lauren made bears,” said Francisco Costa, who picked up one of the cashmere toys. “God, they make everything.”

Of course, these are smart shoppers who know the value of a second opinion during a sale. Costa brought Ashley Olsen, Giambattista Valli escorted her sister Mary-Kate, Vera Wang rifled through the racks with Arnold Scaasi and Stan Herman hung tight to Bernadette Peters. Some guests even had the perk of being styled by a supermodel. “I just got Bette Midler to buy a bag,” said Kate Moss.

Meanwhile, Barry Diller was scheming with Oscar and Annette de la Renta. “Let’s buy Anna Wintour’s coat for $60,000 and resell it for more,” he said, referring to the Vogue editrix, who started unbuttoning her Chanel couture jacket, as if she were considering the offer. Later, von Furstenberg praised Wintour’s orchestration of the evening, saying that if Wintour ever got tired of the magazine world, “New York is going to need a mayor in a few years.”

Corralling everyone away from the clothes and into the lavish tent for dinner wasn’t easy, but the one-course meal was refreshingly brief, as was the award ceremony announcing the winner and runners-up of the CFDA/Vogue Fashion Fund, which is sponsored by Gap and underwritten by Liz Claiborne Inc., Lord & Taylor, L’Oréal Paris, Barneys New York, Coach, Juicy Couture, Kellwood Co., Nordstrom, Theory and Vogue. Rogan Gregory took first prize: $200,000 and a year of mentoring by an industry executive.

Bosworth, who presented Phillip Lim and Philip Crangi with the runner-up prizes — $50,000 each and a year’s lease on a Lexus, plus free parking -— at first wasn’t pleased, complaining to a companion that she had to ad lib part of her speech. (Isn’t she an actress?)

After dinner, pickings were slim, which may be why some guests felt they could haggle for lower prices. (C’mon, people, it’s for charity. Yes, we’re talking to you, Bette.) Near midnight, Kate Spade, Marina Rust and Julia Restoin-Roitfeld went back to basics, loading up with armfuls of solid-color cashmere sweaters for the road.

The first night alone raised an estimated $750,000. The next day, for the public sale, the entrance line snaked around East 26th Street to Park Avenue. “Doesn’t it sort of feel like Loehmann’s?” Donna Karan asked, eyeing the furtive bargain hunters.

And like any Loehmann’s shopper, she was more than willing to offer her opinion about other shoppers’ finds. Shopper Jody Black asked the designer’s approval for every item she had squirreled away in her shopping bag. A $25,000 Dolce & Gabbana fur coat passed inspection, provided Black wore it inside out. “It looks much better that way,” Karan declared, as onlookers nodded. She was less enthusiastic about a bold multistriped Isaac Mizrahi dress. “It ain’t my seven easy pieces…”

Another customer was even more brazen with Karan. “Is your necklace for sale?” she asked.

“No, it’s from Nibia. It’s one-of-a-kind,” the designer replied.

There were plenty of fashion insiders. In addition to Karan, Wintour and Patrick Robinson, Nicole Miller, Doo-Ri Chung and John Bartlett were helping customers. Von Furstenberg was also doing her shopping part. Before heading for the door, she said, “I bought two Fendi fur coats. I’ll have to change the buttons — they say Fendi.”